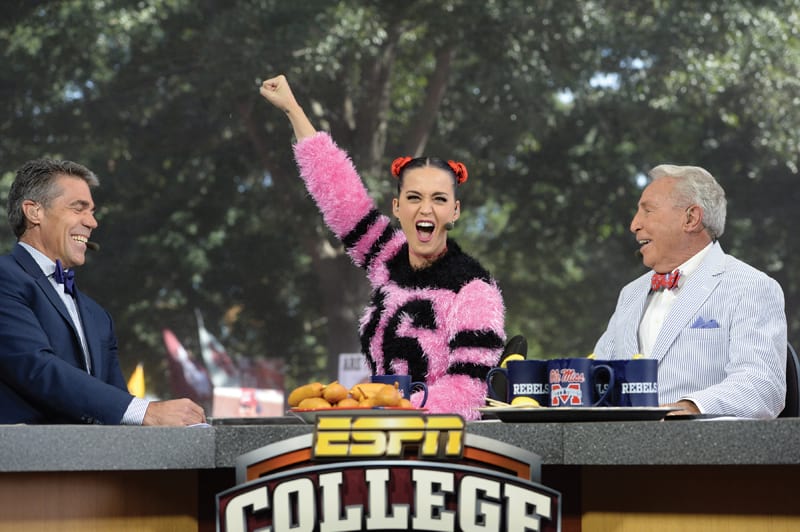 It was a day every Ole Miss fan will remember. It was a day whenever everything went according to plan. It was a day that catapulted Ole Miss into national relevancy and made everyone realize that things in Oxford, Miss., were a bit different than in the past.

That day, of course, was Oct. 4, 2014 when the 11th-ranked Rebels knocked off No. 3 Alabama in front of a sell-out crowd at Vaught-Hemingway Stadium.

“What’s interesting about the whole deal was that we finally got to show the country and the world what Ole Miss is all about,” Ole Miss senior associate athletics director communications and marketing Michael Thompson said. “In some ways, it was a relief because as you grow up an Ole Miss fan or work here, you know what we have. We’re around it all the time. You know how special it is and the potential and all those things.

“The big emotion that it felt like on that Saturday was that finally everyone else was getting to see what we’ve known for so long.”

That day had everything, as everything came together for a program-changing atmosphere.

Ole Miss and Alabama were both undefeated at 4-0. ESPN’s morning preview show, College GameDay, made their first ever appearance in Oxford, as they set up in the Grove. The show concluded with mega superstar Katy Perry showing her affinity for Ole Miss as the guest picker.

When game time rolled around, the atmosphere in Vaught-Hemingway Stadium was never better. The pre-game Hotty Toddy made the hairs on the back of the neck of every person in the stadium stand up. And to top it off, the crowd in the stands and the millions watching on CBS saw one hell of a college football game – a game that ended in fans rushing the field and carrying the goalpost from the south end zone all over Oxford.

No one could’ve drawn it up better. It was truly a moment that put Ole Miss football back on the map.

“It was literally like all the stars aligning, and we were on the stage,” Thompson said.
“I think every part of Ole Miss from the fan base to the game on the field lived up to the hype and expectations.”

That weekend was Ole Miss’ breakthrough, and anyone who’s been around Rebel football long enough knows it has been a long time coming.

There have been a lot of missed opportunities that have led to sleepless nights, conversations filled with what ifs and endless thoughts wondering if Ole Miss would get another chance.

Everyone remembers that LSU game in 2003. People questioned why College GameDay didn’t find their way to Oxford way back then, while others wondered how Ole Miss could get over the proverbial hump if even Archie’s son couldn’t get it done.

Then, there was 2008. A team that started the season with virtually no expectations that ended up being a team no one wanted to see on the other sideline by the end of the year. It was a team that finished on a tear but still had head-scratching losses to Wake Forest, Vanderbilt and South Carolina.

That 2008 season was the reason for high hopes in 2009. Ole Miss was ranked in the top 10 in multiple preseason polls, but a bump in the road on a Thursday night game at South Carolina kept the folks from College GameDay away from Oxford once again.

Every time Ole Miss put itself in a position to capitalize on momentum, it faltered, and it made it easier for the Rebel faithful to be skeptical the next time things seemed to be going in the right direction.

But this time Ole Miss came through.

The pendulum began to swing the Rebels’ way when Hugh Freeze put a stamp on a special first season as Ole Miss’ head coach, as he and quarterback Bo Wallace fed Donte Moncrief repeatedly in the 2012 Egg Bowl to get Ole Miss to bowl eligibility.

That created a snowball effect on the recruiting trail that led to the Rebels owning ESPNU’s all-day National Signing Day coverage, as Freeze and company landed a consensus top-10 recruiting class, which marked the highest recruiting ranking in school history.

The momentum both on and off the field continued to build, and expectations continue to grow. On that Saturday in October last fall, Ole Miss had its first big opportunity in a long time, and this time, it didn’t go to waste.

The Rebels were the in the epicenter of the college football world in the week leading up to the big showdown with Nick Saban’s Crimson Tide, and with the help of a connection between Wallace and Jaylen Walton and an insanely athletic interception by Senquez Golson, Ole Miss was the talk of the country.

“Every metric says that our brand has never been stronger,” Ole Miss athletics director Ross Bjork said. “I think the Alabama weekend helped catapult even further what was already happening. I think it was a great launching point for people to say, ‘Hey, what’s going on in Oxford? What’s happening there at Ole Miss that I need to pay attention to because there’s energy, there’s excitement, they’re attracting celebrities.’”

Ole Miss is selling more merchandise than ever before. According to Bjork, licensing numbers are up 50 percent and applications to the university are at an all-time high. In what seems like a yearly occurrence, Ole Miss will break a record this fall by having the biggest student body in the history of the school.

Things are happening in Oxford, and people all over the country are taking notice.

“We’re attractive to so many people because they see the energy, the charm that is Oxford that is our campus,” Bjork said. “It’s beautiful, and it’s not just us saying that. It’s many people. That brand exposure, that excitement – there’s no ad campaign, no marketing strategy or PR firm that you could hire that could come up with that. It has to happen organically and happen the right way.”

Things certainly happened the right day on that day for Ole Miss, and that led the Rebels to a historic 2014 season. Ole Miss finished the year 9-4 with a berth in the Chick-fil-A Peach Bowl.

Now, all eyes are on to 2015 when the Rebels will in all likelihood have another opportunity in front of them to get over a hump. No one will overlook Ole Miss, and the Rebels will undoubtedly get everyone’s best shot going forward.

This season will tell us where Ole Miss is and how quickly they can be where everyone dreams of.

There’s a new quarterback taking the reigns, an offensive line still trying to figure things out and a defense that has to replace some key pieces. However, expectations are as high as they’ve ever been.

With the way the schedule lays out, it’s expected that Ole Miss and Alabama will meet again with perfect records at stake. In the past, the fans donning the red and blue would probably be pessimistic about the Rebels’ chances of taking down the Tide, but after that big day last year, there’s a little different confidence going around the Ole Miss faithful.

It was only one game, and something that will not impact what happens on the field this season. However, what happened inside Vaught-Hemingway on Oct. 4, 2014 changed Ole Miss football. – RN

*David is a 2014 graduate of Ole Miss, content producer for VSporto, and host of “The Show Up North” which airs on Mondays, Wednesdays and Fridays on Rebel Sports Radio. He is also a featured writer for the National Football Foundation.

**This is just a sample of the the types of features you’ll read in every issue of Rebel Nation Magazine™. The September/October issue is now available by subscription and in stores all across MS, TN, AL, AR and LA (Walmart, Walgreens, Kroger, Winn-Dixie, Barnes & Noble, Books-A-Million and more). You can subscribe online here and receive every issue delivered right to your home of office. The November/December Issue is up next. Click here to find a store location near you.