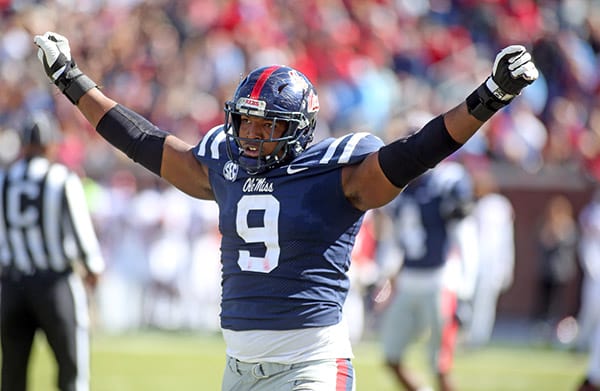 OXFORD, Miss. – Ole Miss junior defensive lineman Breeland Speaks is electing to forgo his senior year of college and enter his name for the upcoming 2018 National Football League Draft, he announced Tuesday.
Statement from Breeland Speaks:
“After discussing it with my family, I have decided to forgo my senior season and enter the 2018 NFL Draft. There are so many people I want to thank including Chancellor Vitter, Mr. Bjork, Coach Luke, the coaching staff, my teammates and everyone at the university for an awesome four years. Most of all, I thank Rebel Nation for the incredible support they gave me from day one. I was proud to Lock The Vaught every Saturday in my home state, and now I look forward to representing Ole Miss at the next level.”
Statement from Ole Miss head coach Matt Luke:
“I have seen Breeland grow as a person and a player over the last four years, and we’re excited to see him take this next step in his career. I am particularly proud of the leadership he brought to our team amidst the challenges we faced. He is a true Rebel, and we look forward to watching him continue our program’s rich NFL tradition.”
After redshirting in 2014, Speaks played in every game the last three years with 19 starts, including the last seven at defensive end after moving from tackle. The Jackson native earned All-SEC second team honors from the Associated Press and Phil Steele this season.
Speaks’ senior campaign saw him rank sixth in the SEC with 7.0 sacks. He led the team with eight QB hurries and finish second in tackles (67) and third in TFLs (8.0). Speaks totaled a career-high 13 stops against LSU, including seven solos.
Follow Ole Miss Football on Twitter (@OleMissFB), Facebook and Instagram in addition to www.OleMissSports.com.
-UM-