Charlie Conerly set the Standard for Quarterbacks in Oxford long before Archie, Eli or any other great Rebel QB’s stepped on Campus

Five decades before Eli Manning won two Super Bowls for the New York Giants, Charlie Conerly was the former Rebel signal caller making the headlines in the city that never sleeps. Years before Archie, Eli’s father, was the toast of the college football landscape as the latest in a long line of standout quarterbacks from Ole Miss, Conerly was setting the groundwork as a single-wing tailback who could pass.

Conerly, a native of Clarksdale, was the first outstanding signal caller for the Ole Miss Rebels. He was a quiet man, a player who garnered the utmost respect from his teammates because of the effort he gave each and every contest. Conerly was a veteran of World War II, earning the rank of corporal fighting in the Pacific Theater of operations. He had to see untold suffering during his time as a U.S. Marine, but he never talked about it. Conerly never opened up about what he did during his service career that interrupted his first playing career at Ole Miss.

That wasn’t his style. He was the strong, silent type. He was the kind of man that John Wayne portrayed in his movies. His stare told his story. His eyes, and rugged good looks, earned him fame after his pro football playing days as the original Marlboro Man. Conerly never spoke about that gig either, according to Eddie Crawford, who played with Conerly on the 1957 New York Giants.

“I will say this about Charlie Conerly, he was very unselfish,” said Crawford, who was a three-sport standout for the Rebels from 1954 to 1956 before playing halfback for the Giants. “He was one of those that just knew how to play the game. And he could always make the big play when he had to.”

Finally, in 1947, in Vaught’s first season, the Rebels won their first SEC Championship, with Conerly as team captain. Ole Miss was 9-2 that season, losing by four points to Vanderbilt and by five points to Arkansas. Vaught’s Rebels played in the school’s second bowl game ever, defeating Texas Christian 13-9 in the now defunct Delta Bowl.

Ole Miss became a powerhouse under Vaught from that point forward, winning five more SEC titles. Conerly was the second player to earn All-American status from Ole Miss. He was elected into the College Football Hall of Fame in 1965, and he was one of just three running backs named to the All-Century Team at Ole Miss in 1992. Billy Brewer was coaching the Rebels back then. He remembers Conerly leaving almost immediately after the dinner was held. That was his style. He was modest, he was unassuming and he never went for the spotlight.

“He was a very quiet guy who never wanted any attention whatsoever,” Brewer said. “Vaught was selected as the coach of that team and I remember he said to me ‘Well, kid, you’ll be the coach of the next 100 years.’ I said ‘Charlie, I don’t think either one of us will be around to see that.’ He had a wonderful sense of humor.”

Brewer had conversations with Conerly in the past, both when he was head coach, and when the two squared off against each other in the NFL. Brewer’s first year in the NFL, in 1960, was the second to last for Conerly. Brewer played for the Washington Redskins, one of the Giants’ main rivals.

“It snowed my rookie season when we were set to play in old Griffith Stadium in Washington D.C.,” Brewer said. “With me being a defensive back, I was just excited about it. I knew they couldn’t throw the ball very much. In that particular time in the NFL, both teams were on the same sideline with one team on a side of the 50 and the other on the other side. I thought they were going to call the game off but they didn’t. We visited a little before the game and I was just in awe of him. He was the ‘It’ quarterback. He was the ‘It’ of Ole Miss, he was ‘It’ in the Southeast.”

As the game went on, Conerly needed to lead the Giants to a touchdown to win the contest. Not only did he do that, he was the one that dove into the end zone. Brewer has never forgotten what Conerly said to him as the two met right at the 50.

“He was under the pile and the snow was about six inches deep and the snow was just banked under his helmet, just all crammed up in there,” Brewer said. “He looked like a snowman. He had that gait walk and he was coming off the field. I was standing at the 50, looking at him, and he sees me and he looked at me and just kept walking when he said this ‘Hell of a way to make a living isn’t it kid?’ I was stoned. That comes up to me in memory nowadays.”

When Conerly finally retired from the Giants following the 1961 season, he held every passing record for over 20 years until Phil Simms came along. Conerly was the “Rookie of the Year” in 1948 and he was the NFL’s Most Valuable Player in 1959. The Giants played in three NFL Championship games in four seasons in the late 1950s. Conerly led the Giants to the title in 1956. During those seasons, Brewer remembers Conerly coming back to Oxford to watch practices, and how he was adored by everyone.

“He would stand on top of the hill where the parking lot is now and where the basketball facility is going to be and watch practice. Of course Coach Vaught would have him down,” Brewer said. “He didn’t have any words of encouragement, he just wanted to come watch. Then when I was coach here, he would come to the games. He would come back on a Monday or the next Friday or something. We were playing close ballgames and doing all this stuff and he came into the office one day and I asked him about the end of the game. He said ‘Billy, I had to leave at halftime. I couldn’t stay. Y’all are playing these games that are real close and it’s drama after drama. I can’t take the stress. How you do it, I can’t understand.’ Here is someone who fought in the war and was a great player in the pros and here, and he asks me that question. That just blew me away.”

There were a number of great players that accompanied Conerly on the Giants of that era. Frank Gifford is one of the most well known, and he said Conerly was the reason the Giants were so popular the following season.

“The next year, the Giants had a sellout every game because of what we did in 1956,” Gifford said in an interview with the New York Times shortly after Conerly’s death. “Charlie was the biggest reason for that.”

Conerly’s rise to popularity came through some hard knocks. In a 14-10 loss to the Eagles in 1952, he was sacked 17 times. New York fans made signs that said “Goodbye Charlie” and “Get a New Quarterback,” according to the same Times article. The Giants ownership made some changes and the new head coach, Jim Lee Howell, hired Vince Lombardi to take over the offense. Conerly thrived in the change as he threw 14 fewer interceptions than the previous season with 100 less attempts. While he never threw for 2,000 or more yards like he did when he started his career in New York, he did surpass 1,700 yards twice in the late stages of his career, and he never had a season in which he threw for more interceptions than touchdowns. All of the stats were put up during an era where the forward pass wasn’t the top option for teams to attack defenses.

“Charlie had a great arm, that was No. 1. He could sit in the pocket very well,” Crawford said adding that Conerly was also a threat to run. “To throw the ball, he was one of the few people that could really lead the receiver. And I thought he had a great knack for doing that. With him playing here at Ole Miss, I always knew what kind of a great quarterback he was, and with the Giants he just capped that off even better.

“He played around some legends up there with the Giants and he was revered as one of the greats in the NFL,” Brewer said. “The Giants’ coach was a big fan of Ole Miss and he would always come to spring practice to see Coach Vaught every year. And when they could, the Giants would draft an Ole Miss player. It’s very ironic that the colors of the New York Giants are similar to the colors of Ole Miss. And all he would ever do was beat you. He was a winner.”

Conerly played in an era where games were heard on the radio, and the coverage of pro and college football wasn’t even near the level of what it was in the late 1960s and 1970s let alone what it is today. Still, Brewer said Conerly’s name was the word around the state.

“He was just an easy-going guy, a real class guy and he was a great quarterback here at Ole Miss,” Brewer said. “If you want to pencil somebody in as the guy that set the tone of being a great quarterback, Charlie Conerly is it. He was it for the rest of the Ole Miss guys that came along. If you wanted to be a quarterback, you’d come to Ole Miss because they have had some really great ones.’

Crawford felt if Conerly had played 20 years later, around the time of Archie, he would be remembered the same way.

“I think he would be the top notch of all of them,” he added. “He was one of the first great quarterbacks to ever play in the SEC.” – RN

This is just a sample of the types of features you’ll see in every issue of Rebel Nation Magazine™. The November/December issue hits stores on November 3 all across MS, TN, AL, AR and LA (Walmart, Walgreens, Kroger, Winn-Dixie, Barnes & Noble, Books-A-Million and more). You can subscribe online here and receive every issue delivered right to your home of office. Click here to find a store near you. 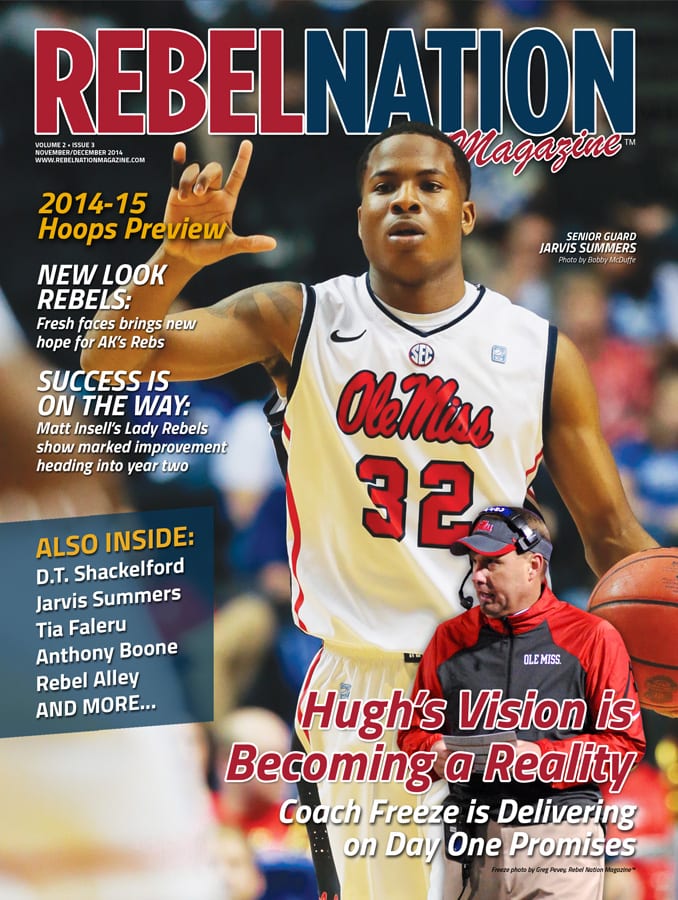