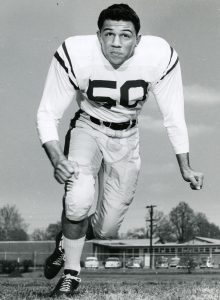 Alford, a native of McComb, first came in contact with the rivalry as a high school player. He remembers driving up to Oxford with a bunch of his friends on the Friday after Thanksgiving to watch the annual game.

Alford’s appreciation for the matchup with the Bulldogs increased when he came to Ole Miss and played under the legendary Johnny Vaught.

Alford said it was made clear when he first got to Ole Miss that the Egg Bowl was important.

“When we were players, you played one platoon. You played a freshman schedule. We played LSU, Vanderbilt and Mississippi State at the end. It was a big deal because a lot of the assistant coaches had Ole Miss backgrounds. They played here so it wasn’t just another game, it was the game,” Alford says. “When we play LSU, it’s a rival game but when you’re playing Mississippi State, it’s different. Most of the time we played against these guys in high school and we knew who they were. It was also at the end of the year and there always seemed to be a bowl on the line when we played.”

Alford was a freshman at Ole Miss in 1956. He redshirted in 1957 and then played 1958-1960. The Rebels won all three matchups with the Bulldogs and 29 overall games. Alford said a big reason why the Rebels had the Bulldogs’ number back then was because of former Ole Miss basketball coach, Bonnie Lee “Country” Graham.

“We had one coach who only scouted Mississippi State back then. Coach Graham was not only the basketball coach but he also played at Ole Miss as an end. He and Wobble Davidson coached the freshman team. He saw Mississippi State play every Saturday, wherever they went, in Starkville or on the road,” Alford said. “Now you can figure out if it was important or not. When we got ready for the scouting report, he had everything. He didn’t have to look at a note, he had everybody’s position everybody’s name, how much they weighed. I don’t know how long he did that, but he did as long as I was there.”

After graduating from Ole Miss, Alford went in to coaching for a time period before returning as AD. Another game in the rivalry that stands out to him was the 1973 contest, Johnny Vaught’s last as head coach.

“I was coaching and we played in Jackson and Bob Tyler was the head coach at Mississippi State. That year Billy Kinard was fired after the third game and Coach Vaught came back as AD and head coach. If we beat Mississippi State, it meant we would have a winning season,” Alford said. “The big thing was Coach Vaught had come back in the middle of the year and we were able to beat our rival in Jackson. That was a big deal because of what it meant to have him back.” 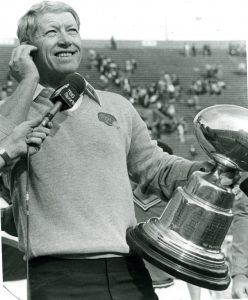 DB/Coach Billy Brewer
Billy Brewer used to sell Coca-Colas at the annual Egg Bowl. As a boy growing up in Columbus, Brewer made money off the game working up a sweat at Davis Wade Stadium.

“One of the first football games that I saw Ole Miss and Mississippi State play was in Starkville with Ole Miss winning something like 49-7 with Showboat Boykin scoring seven touchdowns,” said the former Ole Miss head coach. “Looking back at it in my later years after being a coach, they never changed the defense, they never changed the blocking scheme. That was just it. They out-personneled them.”

What Brewer gained from the experience lead him to use down the road when he became an Ole Miss player under coach Johnny Vaught and the head coach of Ole Miss from 1983-1993.

“I think Coach (Hugh) Freeze and his staff are getting back to this, but it means more to the in-state kids to where when you’re playing this football game … it used to be in my era predominately that they knew each player in the state of Mississippi,” Brewer said. “The coffee shop talk will get a coach fired quicker than anything if you don’t win this ballgame. This is the primary game whether you think it is or not because of that.”

The game that Brewer recalled as fondly as any was his first as head coach, in 1983, in a game that was dominated by the Bulldogs early and won late by the Rebels. Ole Miss entered the game on a roll, having won four straight. One more win and the Rebels were headed to the Independence Bowl.

“We had developed into a good football team that played hard. We weren’t great, but we played hard, but they were night and day better than we were,” Brewer said. “We did things on offense and defense that structurally fitted our personality.

Chemistry wise, we became a good football team. Me being a player and now being a coach could sell and promote what the Mississippi State game meant to me as a player and a coach and the aliments of Ole Miss. I don’t know if it made a lot of difference that first half because they had us down 21-0 and the last play of the half they had to punt the ball.”

Ole Miss was able to return the punt for a touchdown, giving the Rebels some life. After that, they controlled the second half until MSU got into field goal position very late in the game.

“They had an outstanding kicker, one of the best I’ve been around in Artie Crosby. We called timeout and they called timeout. We’re the visiting team. We’re opposite the press box in Jackson. Why (MSU coach Emory Bellard) didn’t move the ball to the right hash mark I do not know. You kick the ball at the post, the wind will blow it across. I’ve coached kickers and I knew that in all my years of the coaching business. I said this kid can kick it from anywhere he is. It didn’t make any difference,” Brewer recalled. “My son Brett is on the sideline and he said they were going to move on the right hashmark. I said I understand that. He killed the ball twice where it was. I haven’t since that before and I haven’t seen it since, how the ball, what happened to the ball.

“We didn’t have the video replay then but I’m not so sure it didn’t cross the cross bar. Anyway they kick the ball for the winning field goal. The Mississippi State stands got up and roared. Some guys can’t look, I’m looking and I thought it was good. Then the Ole Miss fans got up. The whole (stadium) was full. The kick is on its way and the rotation on the ball, it’s like a little single engine plane. You cut the motor off and it kicks back the opposite direction. That’s exactly what this ball did. The wind caught it, stopped it, reversed it and blew it back and it fell down right in front of the crossbar. We win.”

The victory is now known as the Emaculate Deflection. Brewer still remembers what he told Bellard as the two were about to shake hands. “As Emory came across the field, he said ‘Billy, I’ve never seen anything like this in all my days of coaching.’ I gave him kind of a smart alec deal,” Brewer said. “I said ‘Emory, God’s a Rebel. He’s not a Bulldog, he’s an Ole Miss Rebel.’ He said get out here boy in that old Texs drawl.” 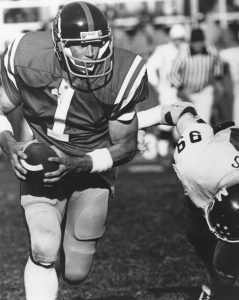 QB – John Fourcade
John Fourcade had no trouble isolating his most memorable match-up with the Mississippi State Bulldogs. Of the three wins he had as a starter at quarterback, it was his senior year, in 1981, that the Rebels ended up winning 21-17 that was Fourcade’s most cherished one simply because he was the player that scored the game-winning touchdown.

“My last game, my last play was against Mississippi State. They were winning the game, they came back. They kicked a field goal with 34 seconds left. On third down, instead of running the clock out, they kicked and went up by three with about 34 seconds left. They kicked it back to us, we drove down the field with a couple of passes and then their was a pass interference call against them that put it on the 1-yard-line,” Fourcade recalls. “With three seconds left, we ended up calling my play that I ran all year long and scored the winning touchdown on my last play ever, beating Mississippi State with two seconds left. To this day, I don’t know why they kicked on third down. It was great for me because it was my last play in a college football uniform.”

Fourcade drew his first start at Ole Miss in 1978 against the Bulldogs, a game the Rebels won 27-7. “It’s a game that no matter what happens throughout the year, no matter what the record, you throw it all out the window. It’s such a hated battle amongst the two teams at the end of the season,” Fourcade said. “You like each other when it’s all said an done but for three, three and a half hours it’s a war.

Trust me, when you score the last play of your college career against your nemesis, the Mississippi State Bulldogs, on the other side, picking up the Egg Bowl trophy was easy. Knowing what it mean to us, we started the season off badly, but to end it on a good note with a win over Mississippi State, the joy and the accolades that came with that game were unbelievable.” – RN