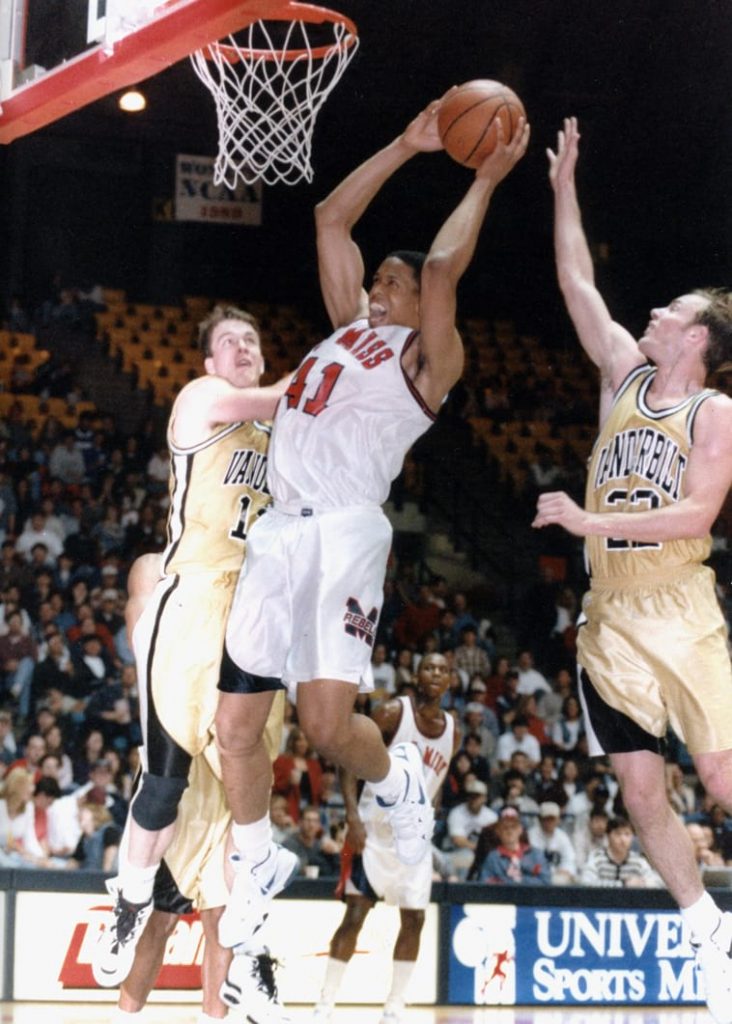 There aren’t many numbers retired at Ole Miss. Archie Manning’s number 18 and the late Chucky Mullins number 38 are most well known. Former baseball coach Jake Gibbs had his number 41 retired. But in Tad Smith Coliseum the number 41 also hangs in retirement. Anthony Boone didn’t have the dream career at Ole Miss as knee injuries robbed him of large chunks of playing time but the Arkansas native made the most of the hardwood time he did get. He averaged just over seven points a game and five rebounds but it was the intangible facts that don’t fit in a stat column that put his number up. Intangibles that made a lasting impression on coaches and fans, enough to take the jersey off his back and put it in the rafters for future generations of Rebel fans to learn about his sacrifices and impact. Teammates and coaches alike describe the scrappy guard as the “heart and soul” of the team.

Boone had his pick of a few Division I schools after an impressive AAU career in Arkansas. But he wanted to be close to home so his family could be part of his career.

“Being close to West Helena that made the decision that much easier,” Boone said. “Playing and competing in the SEC was appealing.”

As a freshman, Boone didn’t know what to expect but knew that with hard work on and off the floor he’d do his best to get a shot.

“I knew it would be difficult transitioning from high school to college. So I came in with the mind-set of working hard and contributing when I got the chance,” Boone said. “And I did quite a bit my freshman year.”

Boone’s jersey number changed in high school but not for sentimental reasons. 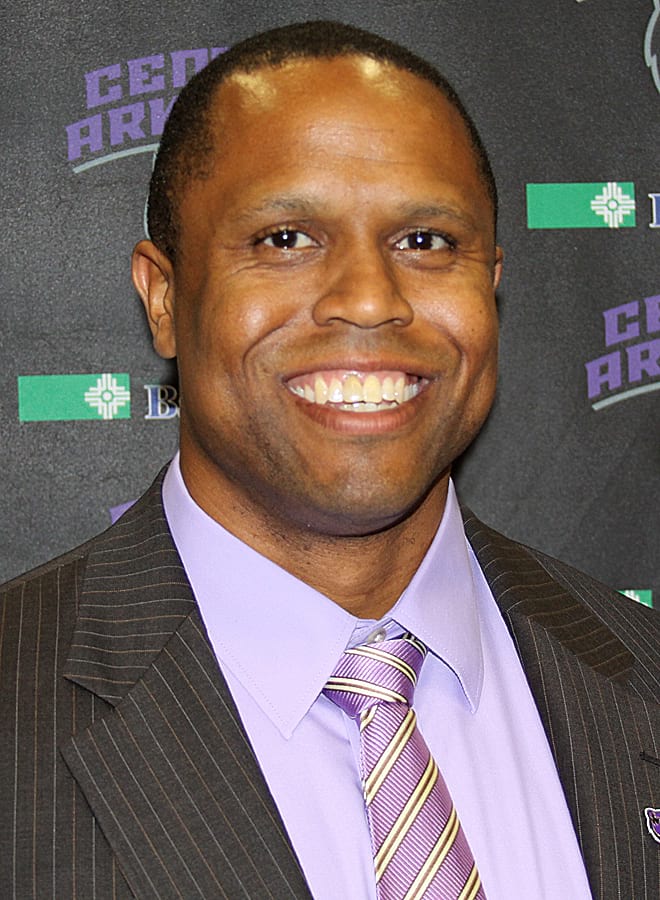 “I started out wearing number 34 but during my sophomore year we got new basketball jerseys and 41 was the biggest so that’s what I wore and kept that number,” he said.
Recruited by Rob Evans and his staff, Boone helped lead the team to its first ever back-to-back 20-win seasons.

“He certainly ran a first class program,” Boone said. “It was all about working hard and enjoying what we were doing and being a family. Playing college basketball in the SEC is difficult enough but with the environment he and the other coaches created for us we were all hungry, as we weren’t all highly recruited. We wanted to do well and build it up. It was a competitive atmosphere but we all loved each other. That was a great recipe for success.”

With four knee injuries during his career, Boone worked hard to get back on the hardwood and never missed enough games to qualify for a medical redshirt. His senior season, the team won the SEC West and was poised for a big run in the NCAA Tourney but a fluke play from an upstart team in Indiana shot down any championship dreams the Rebels had in 1998. Bryce Drew’s shot ended Boone’s career.

“I felt like I was dreaming. I looked around at the guys and my brother was about to walk onto the team. I thought, ‘wow, we’re not going to get to practice together or play together anymore,” he said. “It was very disappointing and still is because they still show that game at tournament time.”

With his Rebel 41 now retired for good, Boone took his degree in chemical engineering and headed for the bench – to become a coach. And he uses the Valpo game to help teach his players.

“With our players we try to point out how we can learn things for life through sports. We’re going to be disappointed and there will be things that seem heartbreaking in our sport and we want to use those things to prepare ourselves mentally to handle whatever happens in our work and in our jobs, with our children and our spouses. We may be helpless at some point to dig ourselves out but we keep going and pushing.”

After spending time in grad school getting his master’s in math he worked his chemistry on the team roster and tutor them as well. Teammate Keith Carter, who now heads up the Ole Miss Athletic Foundation as the executive director, looked up to Boone.

“You look at our teams of the late ’90s and he was really the backbone,” Carter said. “I would loved to have seen a healthy Anthony Boone but what he brought to our team was perseverance and playing hard and fighting through adversity. That really resonated with our team. He was one of those guys you wanted on your team. He took care of the dirty work and set picks and did all those things that made you want to play with him.”

But it was his impact off the court that impacted Carter.

“He was a great guy to be around and he impacted people’s lives,” Carter said.

Boone began his career as a grad assistant at Ole Miss and has worked his way through stops as an assistant at Murray State for three seasons, then six seasons at Jackson State before four years at Grand Canyon University. He even helped coach the Phoenix Mercury of the WNBA before coming to his current stop in familiar territory – assistant head coach at the University of Central Arkansas for Russ Pennell who recruited him to Ole Miss. Boone worked for Pennell at GCU and the Mercury.

“Murray State was a great program and a great experience,” he said. “There was a lot of aspects about college coaching that I didn’t realize went on. I got a lot of experience handling things off the court with guys and their academics mixed with team travel and scouting. Then I got my first real taste of recruiting.”

At Jackson State he garnered more responsibility coaching on the floor.

“A number of guys we coached played professionally and that was a lot of fun coaching guys who are driven,” he said. “From there I went with Coach Pennell to Grand Canyon with a brand new team there. That was challenging and exciting all at the same time. Starting fro the ground floor and building a new program. It was a lot of fun living in Arizona.”

From there the WNBA sideline came available.

“There weren’t very many differences. They were fast and very skilled. The only difference is that the guys jumped better but the ladies listened better. They were able to handle more things and change things on the fly.”

Now home in Arkansas, Boone is ready for the next challenge of his coaching career.
“This is a great opportunity for both of us to get back home and it’s a challenge to build again from the ground up. We are ready for the challenges ahead of us,” Boone said. “We have a pretty young staff so I’ll be mentoring them. Helping them learn the things I had to learn when I first got into coaching. I told Coach Pennell that I wanted to be for them what I had and sometimes what I didn’t have when I first got into coaching.”

Being on the same page with Coach Pennell that he’s know for more than half of his life, Boone is ready for this season.

“We basically have the same ideas and philosophies. We come up with ideas and bounce them off each other. And they are always pretty sound,” he said. “We’ll run similar to what we ran at Ole Miss. We’re more defensive minded than anything. We want to get out and pressure. We want to be disruptive on defense.”

The 38-year old coach may have a few player’s numbers retired if he can instill in them the desire and attitude that he still shows as a coach from his playing days. But he had no idea that Ole Miss was going to honor him back in 1998.

Always thinking of others along with hard work and dedication, there may be more 41s to come. – RN

THIS IS JUST A SAMPLE OF THE TYPES OF STORIES YOU’LL READ IN EVERY ISSU REBEL RAGS MAGAZINE™. DON’T MISS AN ISSUE!!!! CLICK HERE TO SUBSCRIBE TODAY! March/April issue coming soon!