In his three years at Ole Miss, Coach Hugh Freeze has amassed 24 wins, increasing his win total each year resulting in a 9 win season in 2014.  His 24 wins put Coach Freeze in some rare company in the State of Mississippi and in the SEC.

In fact, since World War II no one has been able to match Hugh Freeze’s three year win total in this State. Famed Ole Miss Coach Johnny Vaught started at Ole Miss with a bang in 1947 and won 17 games in his first two seasons, but a rebuilding year in 1949 resulted in only 4 wins.

Houston Nutt came to Ole Miss with a wealth of talent on the roster and won 9 games each of his first two years in ’08 and ’09 but had a disaster of a season in 2010 with only four wins.

Going back through the annuals of Ole Miss history, the only Ole Miss coach with more than 24 wins in three years was Harry Mehre who won 25 from 1938 to 1940.

Mehre had moderate success at Ole Miss, winning 25 games his first three years (’38-’40).  The end of his coaching career was obviously affected by the World War II draft. Mehre left the coaching business for a business job during the war but was a football analyst for the Atlanta Journal for 22 years. 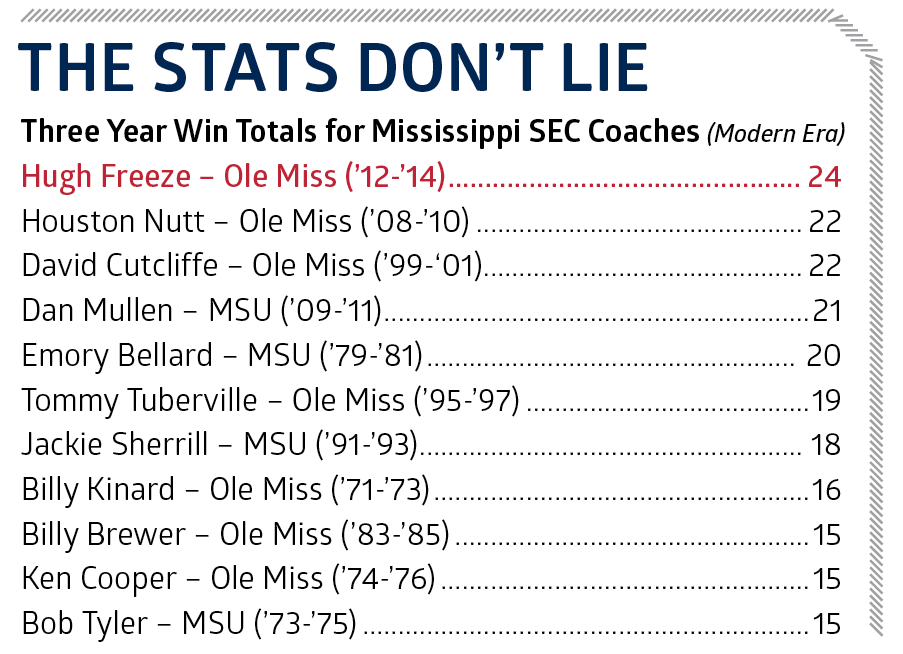 Today, few SEC coaches have to worry about their finances or paying their bills.  SEC coaching salaries are averaging around $3.5 million per year now, but even with the outlandish salaries and coaching talent in the league, few current SEC coaches have won more than Freeze.

All Les Miles had to do was roll the balls ot on the field when he took over LSU in 2005 for Nick Saban as he won 32 total games in his first three seasons.

Mark Richt took over Georgia in 2001 and won 32 games for the Dogs over his first three seasons and Kevin Sumlin, thanks to Johnny Manziel, won 28 games over the same period of time as Freeze.  Just for the record, two of Sumlin’s wins over Ole Miss were late, come-from-behind  victories or both Sumlin and Freeze would have 26 wins each.

At some point all coaches have to deal with a rebuilding year.  Unless you inherit depth like Les Miles you will have to work through a roster “bubble” and fill some position gaps.

Johnny Vaught, David Cutcliffe and Houston Nutt all had four win seasons at Ole Miss once their roster bubble popped.

2015 will see Ole Miss return 17 starters, which is the most in the SEC, but they will miss the experience of Bo Wallace, Senquez Golson and Cody Prewitt on next year’s team.

With the luxury of so many returning seniors, Freeze will have a chance to further separate himself from other coaches in the win column.  If he can find a serviceable replacement for Bo Wallace and win 8 games next season, Freeze will surpass Mehre for the all-time best start at Ole Miss after 4 years with 32 wins, and best in the state of Mississippi history in the modern era.

Allny McKeen had Mississippi State on a roll from 1939 to 1942 winning 34 games in four years before WW II put the program on hiatus.  McKeen’s 1941 team is the only MSU team to win an overall SEC football title in their entire 115 year history.

Mentioning Freeze’s name along with Johnny Vaught and other legendary head coaches may raise some eyebrows, but also consider that Vaught averaged 7.6 wins per year over his 25 year career.  Freeze is at an even 8 win average so far.

What is even more impressive in Hugh Freeze’s three year record is the state of the program when he took over.  Freeze did not have multiple future NFL players on the roster as when Coach Nutt took over in 2008.  Freeze inherited a team with low morale, over 20 kids at risk of failing out of school and no real glimpse of daylight for the fans.

Freeze entered Ole Miss with personal expectations that it might take a few years to get the program back on track.  But after back-to-back bowls in his first two seasons, Freeze’s off season narrative changed to try to tamper fans’ expectations.

At the Regions’ pro-am golf tournament last May, Freeze responded to the topic of being ahead of schedule.  He stated, “Actually way ahead for me.  Some fans might not say that.  I kind of thought year 3 we would be fighting to get to a bowl game,” he said. “Having gone to two and won two, I think we’re ahead of schedule.”1

He made it well known to the fan base and to the media that they were not quite ready for SEC championships.  His honesty plus nine wins this year has further engendered him to the Ole Miss fan base.
Athletic director Ross Bjork rewarded Freeze this year with a big salary increase to reflect his win total by making him the 4th highest paid coach in the SEC with over $4 million per year.

That is no longer the case.

With the recent success on the field, a current $150 million building campaign along with the existing facilities, Ole Miss is becoming a school that can legitimately compete for titles again.

It has been over 50 years since Ole Miss has won the SEC, but with the unique qualities of Hugh Freeze at the helm, Ole Miss is back in the national spotlight again. – RN

THIS IS JUST A SAMPLE OF THE TYPES OF STORIES YOU’LL READ IN EVERY ISSUE OF REBEL NATION MAGAZINE™. CLICK HERE TO SUBSCRIBE TODAY! May/June issue coming soon!