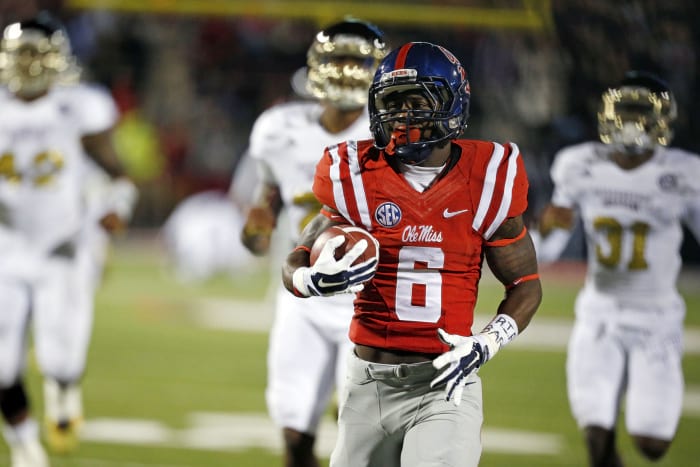 There have been numerous big plays in the 111 football meetings between Ole Miss and Mississippi State.
Whatever happens moving forward there’s no doubt that one of the rivalry’s biggest plays has been produced by one of its smallest participants.

Jaylen Walton’s 91-yard touchdown run didn’t seal the deal in the Rebels’ 31-17 win over the Bulldogs. That came later, requiring a halfback pass from Jordan Wilkins and a later goalline stand by the Rebels’ defense.

However, Walton’s run was huge. It gained separation.

It gave Ole Miss a two-touchdown lead for the first time, and suddenly a team struggling with injuries and the recent past of a 30-0 road loss the week before was fueled with adrenaline and playing with even more confidence.

The Rebels could feel a ninth regular season win – their most under head coach Hugh Freeze – within their grasp not to mention coveted Egg Bowl trophy that would come with it.

And Jaylen Walton was the catalyst for it all.

Left tackle Laremy Tunsil still isn’t sure it was real.

The play was going away from Tunsil. He chipped the MSU end at the outset, but when Walton reversed his field he had to run around Tunsil’s man in the backfield before turning up toward the south end zone. When he did he broke a tackle and picked up key blocks by Evan Engram first and Cody Core later to reach the end zone.

Tunsil knew the play was going way from him and thought he would be more of an on-looker than engaged participant.
Then the Bulldogs got penetration on the right side after Walton took the toss. That’s what caused Walton to rethink the original plan.

His ability to stop on a dime and change directions was a handy asset then. It’s why that MSU penetration didn’t touch him.
“I was like, ‘Man, I can’t believe this is happening,’” Tunsil said.
But it was.

Walton was off to the races as 60,000-plus sat stunned, most of them with very good feelings about what was unfolding before their eyes.

“Yeah, I’ve watched that a few times,” says Walton, offering a sly smile when asked he’s grown tired of watching video highlights of one of the game’s defining moments.

Walton has been no stranger to the end zone, but picking his way through the MSU defense for 91 yards was the crowning achievement, to date, for a player small in stature but not in drive.

Walton carries just 166 pounds on his 5-foot-8 frame, and his big plays have come less with break-away speed and more with great vision and field awareness.

As a high school standout The Memphis Commercial Appeal named Walton its Class 5A player of the year, but most recruiting services did not have him among their top 50 running backs nation-wide.

That was in spite of rushing for 2,584 yards and 33 touchdowns as a senior at Memphis’ Ridgeway High School.
Rivals rated Walton a three-star recruited and listed him as the nation’s No. 8 “all-purpose” back.

A member of Freeze’s abbreviated 2012 class, it didn’t take Walton long to distinguish himself at Ole Miss, but it did take him some time to distance himself from fellow 2012 signee I’Tavius Mathers.

Walton showed his versatility early with big plays in the passing game and on special teams.
He shined on the big stage as a rookie when Texas visited with a 51-yard touchdown catch-and-run and a 100-yard kick return touchdown, just the fifth in school history.

Walton continued to excel in the passing game his first three seasons. A comfort level developed between quarterback Bo Wallace and Walton on the wheel route. It often produced big plays, one of them the winning touchdown in the Rebels’ upset of coaches No. 1 Alabama in 2014.

Wallace spotted Walton open out of the backfield, and the 10-yard touchdown put Ole Miss in front with less than 3 minutes to play.

At the time Wallace was still a co-equal with Mathers in the backfield. That changed late in the year.

Freeze said one of the most important factors in the Rebels’ 206 rushing yards against MSU was scaling back the offense.
He picked out a handful of running plays that he felt worked best through the season and stuck with them. Most of them involved Walton.

“We did have some very solid runs, those 10-, 8- and 6-yard gainers that we looked really hard at looking over the course of the year and said, ‘Here’s what we did really, really successfully in the run game. We’re down to the last game let’s live and die with those.’ We probably we got a little smarter, but our kids executed it, and our running backs ran extremely hard that game too,” Freeze said.

Most of the execution was from Walton, who finished with 148 yards and the long touchdown run on 14 carries.
Subtract the 91-yard dagger, and Walton had 57 yards on 13, an average of 4.4 per carry.

Before Freeze called the play that became Walton’s long run he’d gotten an earful about it from offensive line coach and co-offensive coordinator Matt Luke.

“Matt wanted that play run, and as soon as he crossed the goalline I said on the headset, ‘That’s exactly the way you drew it up this week, Matt. He got a big kick out of that,’” Freeze said.

Discussions of Walton’s Egg Bowl role began during the week with running backs coach Derrick Nix. Freeze and Nix knew it was going to be a big one.

“Nix and I talked this week about Jaylen. We said, ‘We’re going to run him till his wheels come off.’ If we were having success running we were going to keep handing it to him.”

Play-calling gave the Rebels a boost too. Walton took the direct snap on a few of his runs, something he didn’t do during the regular season.

“We just spread it around the field, coming from back side to front and front to back. We gave them a look we hadn’t been doing,” Walton said.

Part of that look included Wilkins throwing a 31-yard touchdown pass to Core on a run-option play to the right side.
With 9:14 left in the game it regained a two-touchdown advantage for Ole Miss. MSU had climbed to within seven points back after Walton’s run made it a 24-10 game with 2:13 left in the third quarter.

Wilkins-to-Core would be the final points of the game.

While Freeze leaned on Walton down the stretch Wilkins seemed to position himself as the No. 2 back. He had more carries than Mathers in the final two regular season games, though that wasn’t the case in the Peach Bowl, a 42-3 loss to TCU.
Mathers carried seven times in Atlanta to Wilkins’ four.

Mathers has since left the program, transferring to Middle Tennessee State in his hometown of Murfreesboro.
Mark Dodson, a sophomore in 2014, has also transferred out of the program.

Walton says he’s comfortable with an increased role but just wants to make the most of his opportunities whenever and however they come.

The running backs picture looks different now. There will be new faces with in-coming freshmen, and junior college transfer Akeem Judd – at 220 pounds the biggest back on the roster – becomes available after a redshirt year.

The likelihood is that Freeze will favor his experienced senior when things get started. Walton welcomes the challenge.
“I think I can handle it pretty well,” he said. “Whenever a play needs to be made I just want to make it. Whenever it’s time for me to carry the ball for my team, I just want to make sure I get more yards after contact. I want to give 110 percent for my team.” – RN

THIS IS JUST A SAMPLE OF THE TYPES OF STORIES YOU’LL READ IN EVERY ISSUE OF REBEL NATION MAGAZINE™. CLICK HERE TO SUBSCRIBE TODAY! May/June issue hits stores on May 5!