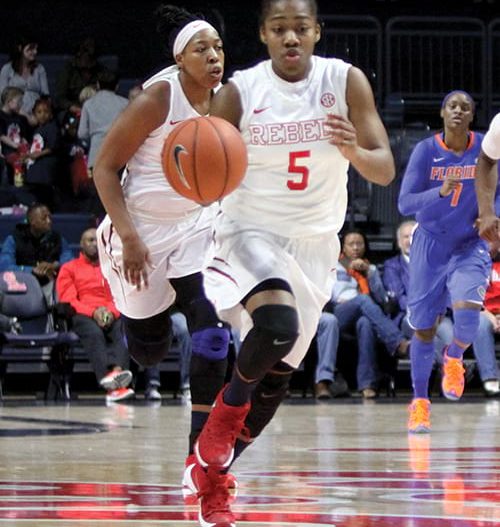 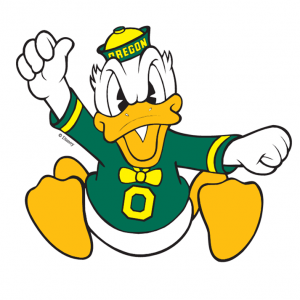 Ole Miss will take its 9-1 start out to the West Coast for a big road test at No. 9 Oregon (Dec. 17) and Portland State (Dec. 19) before taking nine days off for the holidays.

RANKED SHOWDOWN IN EUGENE
A big test looms for the Rebels in the Beaver State with a ranked showdown at No. 9 Oregon on Dec. 17 — the first ranked opponent of the year for Ole Miss.

Under Matt Insell, the Rebels have won four games vs. top-25 schools — including vs. No. 25 Oregon last season in Oxford (83-67). In that game, Ole Miss forced 17 turnovers and received big performances out of Taylor Manuel (22 points) and Madinah Muhammad (18). The win for Ole Miss was the first over a non-SEC ranked team since the Elite Eight 2006-07 team.

Ole Miss will take a day in between to travel up to Portland, where the Rebels will square off with Portland State on Dec. 19.

REBS ON FIRE
Ole Miss has bounced back from a tough loss to Saint Louis on a neutral court at DePaul’s Maggie Dixon Classic on Nov. 17 with an impressive seven-game winning streak, that 79-64 loss to the Billikens remaining as the lone blemish on a strong 9-1 Rebel resume thus far. The streak is the longest since Matt Insell’s first Rebel squad also won seven in a row in 2013-14.

LAST TIME OUT (vs. Southern Miss)
Southern Miss cut a 16-point deficit at the beginning of the fourth quarter in half, but the Rebels but in a resilient effort down the final stretch to hold on for a 68-59 win over the Lady Eagles on Dec. 12.

REBS INCHING CLOSER TO TOP-25
Ole Miss is starting to gain the attention of the national polls after jumping out to a 9-1 start. The Rebels have jumped up to a season-high No. 39 in the latest NCAA RPI rankings after sitting No. 44 after the first report.

The Rebels are also receiving eight votes in the latest USA Today/WBCA Coaches Poll released Dec. 12, doubling the four they received a week earlier. If Ole Miss is able to crack either the AP or USA Today polls, it would be the first time since the final poll of the 2006-07 Elite Eight season that the Rebels ranked in either poll. That year, Ole Miss finished the season No. 10 in both top-25 polls.

OUT OF THE BLOCKS
Fast starts have been a hallmark of head coach Matt Insell’s Rebel squads, and the 2017-18 team has been no different. However, this year’s squad is off to the best start since 2005-06 at 9-1 and are currently on a seven-game winning streak — the longest since Insell’s first Ole Miss squad won seven in a row in 2013-14.

Ole Miss is currently one of 13 teams nationally to be 9-1 or better through at least 10 games played.

FEARSOME DEFENSE
The Rebel defense has proved difficult to maneuver in the opening stages of the 2017-18 season, stifling opponents from the field. Ole Miss has held eight of its 10 opponents under 40 percent shooting, going 8-0 in such games. No Rebel opponent has eclipsed 50 percent shooting for a game, whereas Ole Miss has done so three times (going 3-0 in those games). Furthermore, the Rebels have held six of their 10 opponents to under 30 percent three-point shooting.

Ole Miss ranks as one of the top defenses nationally, sitting 14th in the NCAA in blocks per game (6.1) and 17 in opponent field goal percentage (.339).

THE BEST DEFENSE…
…is a good offense, and the Rebels possess a potent one — even without senior and Preseason Second-Team All-SEC member Shandricka Sessom. Ole Miss currently averages 77.4 points per game — the fourth-best average in the SEC and 47th-best in the NCAA at the moment — which includes 78.9 PPG in wins.

Furthermore, Ole Miss has a scoring margin of 16.7 PPG — an average that increases to 20.2 in wins this year. That 17.6 margin ranks fourth-best in the SEC and 37th best in the nation.

Junior guard Madinah Muhammad has accounted for 26.0 percent of all Rebel scoring by herself, and that number increases at home (27.0).

CAN’T-MISS
The Rebels have been money from the field, shooting the fifth-best clip in the SEC and 34th-best in the nation at .455. Helping that is an impressive 18 quarters (out of 40 total) where the Rebels are shooting 50 percent or better.

GETTING TO THE LINE
After only being able to get to the line a total of 66 times in the first four games of the season, the Rebels have visited the charity stripe an impressive 164 times in the following six games. The recent surge in trips to the free throw line began with 37 against Troy on Nov. 21 — the most since Ole Miss attempted 38 vs. Florida on Jan. 8, 2015. The Rebels also sank 29 of those 37 free throw attempts, the most conversions since hitting 25 that same game vs. Florida in 2014-15. Madinah Muhammad was 12-of-13 from the line in that game alone, the most in a game in the SEC this year and the most by a Rebel since Alissa Alston sank 12 vs. Auburn on Feb. 16, 2017.

After starting the year with just one game with 20 or more trips to the free throw line, the Rebels have gone on to to at least 20 times in each of the following six games.

BLOCK PARTY
Ole Miss has been a dominant force in shot blocking this season, thanks primarily to freshman center Promise Taylor. The Rebels rank 14th in the NCAA in blocks per game (6.1) and eighth in total blocks (61) — 31 of which come from Taylor, who ranks fifth in both total blocks and seventh in blocks per game (3.1). The Rebels have blocked at least five shots in all but but two games this season and have swatted seven or more on five different occasions.

Because of the surge in blocked shots, the Rebels — at 6.1 blocks per game — are currently on pace for 183 total blocks by season’s end, potentially destroying the current single-season record of 129 set in 1982-83.

RECORDS ARE MEANT TO BE BROKEN
Ole Miss put on a dazzling offensive spectacle against Delaware State on Nov. 18, putting up the third-most points in a game ever while re-writing several other records in the process. The Rebels held a 64-19 advantage at halftime, the largest scoring margin in any half in school history (+45) and the second-most points scored in any half. Ole Miss was also tied for the ninth-largest win margin at +52 at the 110-58 final.

#SplashSisters, PART DEUX?
With one half of the #SplashSisters, senior guard Shandricka Sessom, out for the season due to a torn ACL, it’s been junior point guard Alissa Alston that has picked up the slack and formed a formidable duo with fellow junior Madinah Muhammad.

At the time of her injury, both Sessom and Muhammad were scoring a combined 38.2 points per game — 45.7 percent of all Rebel scoring at that point. Since that game vs. Middle Tennessee, Alston has given Ole Miss a boost with 18.8 PPG in those four games — including a career-high 27 points vs. South Alabama.

Since Sessom’s injury, both Alston and Muhammad have combined for 38.3 PPG and are shooting a combined .430 from the field and .865 from the free throw line for 58 total free throws.

SLICE AND DICE
Junior point guard Alissa Alston has begun to shore up her scoring as a legitimate threat off the dribble this season. Alston has eclipsed the 20-point mark three times, most recently leading the way vs. South Alabama with a career-high 27 points on a near-perfect 10-of-11 shooting day from the field. Alston also owns a 26-point performance vs. Troy on Nov. 21 (then a career-high) and 22 points on national TV in a win vs. Middle Tennessee on Nov. 29.

She hasn’t given up on her bread-and-butter, though, leading Ole Miss and ranking fourth in the SEC with 5.1 assists per game. In her career, she has scored in double-digits and had at least five assists six times — including twice this season. Alston had a career-high 10 assists to her credit this year as well as the Rebels’ record-breaking victory vs. Delaware State on Nov. 18. In her career, Alston has 165 assists (2.5/game).

OH MY, SHE’S ON FIRE
Junior guard Madinah Muhammad has barely had a cold moment on the floor this season on the way to an incredible start as the top scorer for the Rebels.

Muhammad currently ranks second in the SEC and 33rd nationally at 20.1 points per game — an impressive feat despite going scoreless in an eight-minute outing at Temple on Nov. 25 while nursing an injury. Entering that game, she was the conference’s top scorer at 24.6 PPG.

Other than that game, Muhammad has been unable to be held under 13 points scored, and has set new career-highs three separate times. She opened the season with five straight games in double-digits, the second streak in her career of at least five in a row (her career-long streak is six from Jan. 22 to Feb. 12 last season). Muhammad also scored three straight games with at least 20 points for the first time in her Rebel career during that time.

SETTING MILESTONES
Madinah Muhammad is on pace to be one of the top scorers by the end of her Ole Miss career. The Chicago native needs only eight points to eclipse 800 for her Rebel career, currently sitting at 792 points. At her current season pace of 20.1 points per game, Muhammad is on pace to reach 1,194 by season’s end — putting her well within the realm of becoming the 29th Rebel to score 1,000 points in a career. If she does, she will become the second junior in as many years to do so (senior Shandricka Sessom did so in 2016-17), and the third in the last six seasons (Valencia McFarland, 2012-13).

DON’T STOP ME NOW
Madinah Muhammad did something no Rebel had done in two seasons against Arkansas State on Dec. 2, dropping 30 points on the Red Wolves for a new career high and the first Ole Miss 30-point game since current junior Torri Lewis lit the net on fire for 36 points on 10 threes vs. New Orleans as a freshman on Dec. 14, 2015.

THE KID CAN PLAY
True freshman Promise Taylor has wasted no time in cementing herself as a valuable piece of the Rebel puzzle this season. Taylor has earned SEC Freshman of the Week honors twice this year and has started all nine games at center.

Taylor has been dominant on both ends of the floor, currently leading the SEC in blocks (3.1 per game; 7th NCAA) and ranking as the conference’s top freshman in shooting percentage with aclip of .628, which ranks fourth overall.

ON PACE FOR GREATNESS
Freshman Promise Taylor is on pace to annihilate the single-season blocks record. At her current pace of 3.1 per game, Taylor would have 93 total blocks by season’s end — dismantling the previous record of 67 set by Shawn Goff in 2007-08.

HEARTBREAKING LOSS
Senior and Preseason Second-Team All-SEC member Shandricka Sessom tore her ACL during the closing minutes of the first quarter vs. Middle Tennessee on Wednesday, ending her season. Sessom, who was averaging 17.7 PPG entering Wednesday, will redshirt and return in 2018-19.

TOURNAMENT TEAMS ON THE DOCKET
Ole Miss plays 12 schools in 2017-18 that advanced to the NCAA Tournament in 2016-17. The Rebels came out victorious against the first, Troy (96-93), and won at Temple, 64-48. Next up for Ole Miss is No. 9 Oregon, who advanced to the Elite Eight in 2017 after the Rebels defeated them in Oxford during non-conference play.

Missouri (Jan. 18, at home)
2nd Round, lost to Florida State

Tennessee (Jan. 25, in Knoxville)
2nd Round, lost to Louisville