HOW TO LANDSHARK: FinsUp, with Jerrell Powe 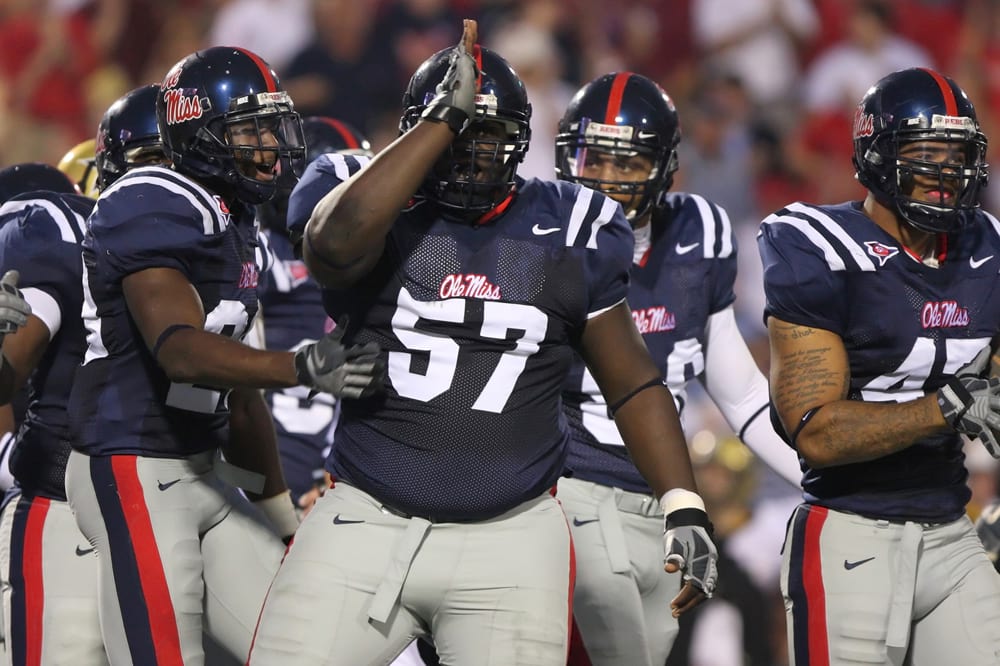 Jerrell Powe was one of the top nose tackles to ever play at Ole Miss. Not only that, but Powe was also in on the beginning of the phenomenon Ole Miss fans now call the “Landshark.” Now entering his 3rd season with the NFL’s Houston Texans, Powe returns to Oxford frequently during the off-season and remains a fan favorite. With the “Fins Up” movement taking off like it has we thought it would be fun to catch up with Powe and talk Ole Miss, Landsharks and the NFL.

RN: You went through some really tough times to become eligible to play at Ole Miss. Now that you’re a few years into your NFL career, how do you look back on that experience?

JP: It was a tough process, and there were a lot of obstacles to overcome.  But I committed to play at Ole Miss, and that was what was going to happen.  The most rewarding things come after the hardest work, and that’s definitely true.  But, looking back, the whole situation should never have happened.  I should have worked harder in high school, but then it ended up going way beyond that with other people getting involved.  I’ve been blessed, though.  Everyone has to deal with troubles in life, and those just happened to be mine.  Compared to so many others, I had it easy, and I am thankful for that.

RN: How does the NFL compare to the SEC from your perspective?

JP: I have to brag on the SEC.  You can’t look far in the NFL without finding SEC players, and we lead the League and the Draft just about every year.  But college and the NFL are really different.  In a lot of ways, college football is harder.  Not only do college players have to perform on the field, they have to go to class, maintain a certain GPA, go to study hall, and deal with all the pressures of being a player.  It is not easy, and it takes all your time.

Being in the NFL is a job.  It’s very demanding and takes all of your time as well, but it’s a one-track thing.  In college you’re having to walk across campus all day to do your duties, but in the NFL, your meetings and training are all in one spot.  In that way, it can be a better system.  If you treat it like a job, you can succeed.

RN: Do you remember the first time you did the Landshark?

JP: Of course, very well.  Let me tell you the story.  My sophomore year, 2008, I was backing up Peria Jerry at noseguard, and Tony Fein was backing up Jonathan Cornell at middle linebacker.  But our defense was really competitive at that time.  Tony and I pushed hard for playing time, and we wanted to go up against the first string defense all the time.

Tony and I were hanging out in one of our apartments after pre-season practice one day, and we were talking about fighting to play more. We decided we needed to come up with a celebration for when we got the tackles.  Just joking around, Tony threw up the fin on his head and said that was what he was going to do when he got tackles.  We didn’t have a name for it, and we were laughing talking about doing that.

It was about showing that we were there and ready to play.  We probably gave Coach Nix a pretty hard time about how hungry we were to play, and the fin during practice made our defense that much hungrier.
Then, I remember it clearly the first time the fin came out on the field.  It was 2008 against Vanderbilt. Vandy had a running back named Jared Hawkins. They had been bragging on him calling him “a bowling ball with butcher knives.”  Coach put me in, and we got to Hawkins.  TFL.

Right then, I threw up the fin; that was the first time it ever got used on field.  In that picture, I’m looking over at the sidelines staring right at our guys.  The crew in that picture was there to destroy.  You can see Tony, Greg [Hardy], me, and Johnny Brown.  The team struggled that year, but that Egg Bowl was the beginning of the feast.

We didn’t have a name for it then, but pretty soon the fans came up with Landshark.  We loved it.  Mississippi State didn’t love it, but we did.  45-0 will do that to you. 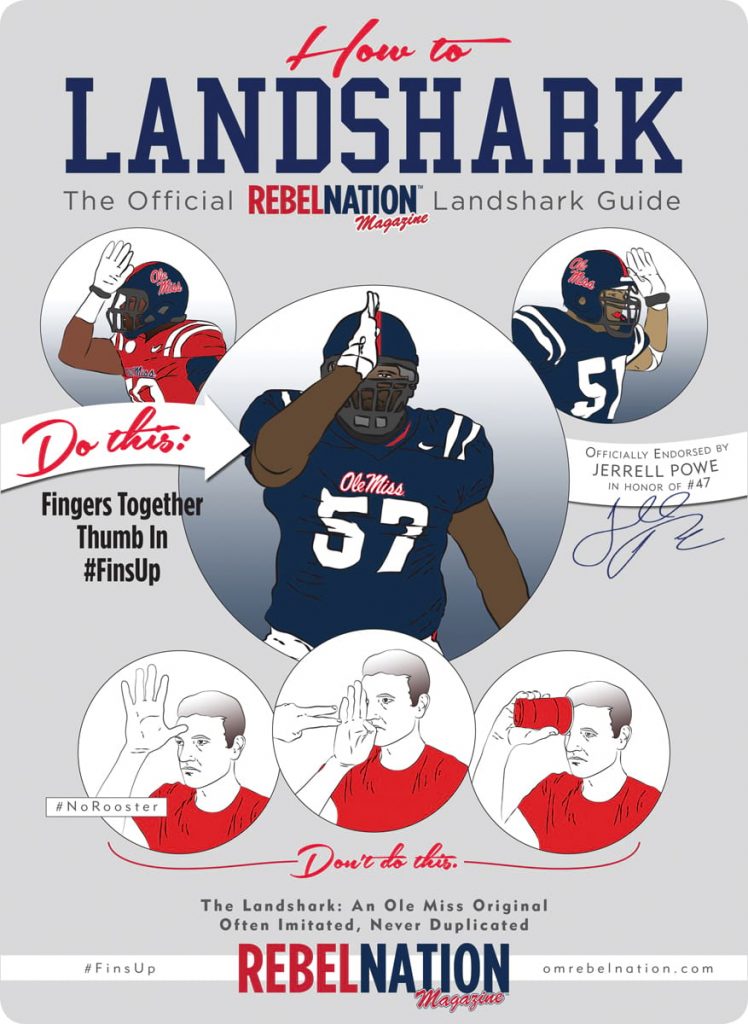 RN: Give us your guide to proper Landshark technique.

JP: Thumb in, fingers together, but I’m not going to come down on anyone for having their own style.

RN: How often do you come back to Oxford?

JP: If I come to Mississippi, I come to Oxford.  All the people who supported me all those years are really important to me, and, with the new culture building around here, I don’t miss it.  I try to end up in Oxford at least two or three times a year.

RN: What’s your relationship like with Coach Freeze and the current staff and players?

JP: Great!  Coach Freeze, Maurice [Harris], Barney [Farrar], Coach Nix… all those guys are great, and we always talk when I’m in town.  Coach Freeze always showers me with love, and they are all so positive, laughing and smiling.

We had a few years where things weren’t so good, and it’s exciting to see the change and think about the future.  I remember a couple of years ago even some Ole Miss fans making fun of me for speaking up, but you can’t mind those people.  They were just confused, but we’ve got it together now.

As for the players, I always try to give encouraging words to those guys and hopefully give them some useful advice on how to succeed in college.  Every player wants to go pro, but you’ve got to prove yourself in college before you even think about that.  Be the best at your position on your team first, then maybe the conference… one day at a time.  I’m also glad to see Coach Wommack’s defense lighting a fire.  I’ve known Denzel, and I’ve gotten to meet him and Robert together.  These tight groups are important for four strong quarters.  – RN