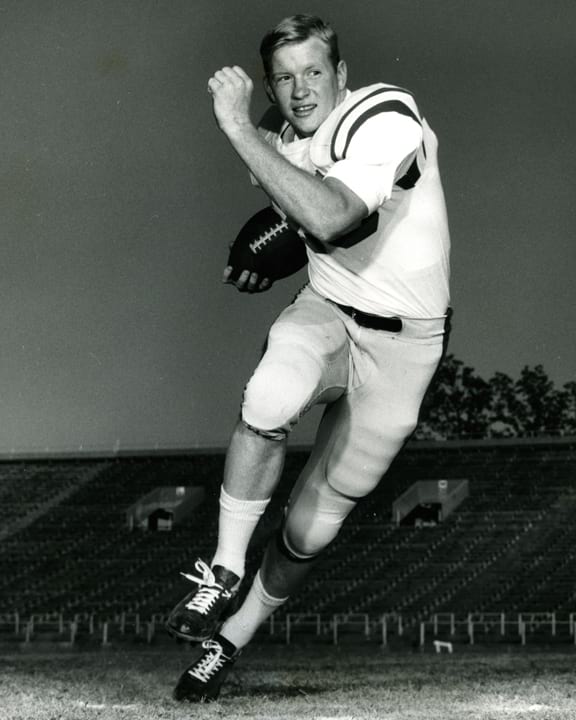 Mike Dennis will be inducted into the Mississippi Sports Hall of Fame, Saturday, August 1, 2015.

Coach Vaught had to fend off Alabama’s Bear Bryant, but in the end he got his man.

Football essentially shaped who Mike Dennis is. The former Ole Miss Rebel, and Jackson native, has literally made a living from football. His family was formed while he was a member of the Los Angeles Rams. His toughness and work ethic was set in motion by his high school coach, Jack Carlisle, and then improved through Johnny Vaught.

Along the way, football helped provide Dennis an education, not only at Ole Miss, but in dental school.  He played in the ‘Golden Age’ of pro football, when the competition between the NFL and AFL was fierce and the behind-the-scenes stories were even more colorful.

“I thought I was going to Alabama. That one weekend over there that summer really impressed me. Bear had sent his son, Paul Jr., over to all my home games my senior year,” said Dennis, who played fullback and outside linebacker at Murrah High. “Jack Carlisle got me ready for Ole Miss. He was tough. He came in before my senior year. We started the summer drills with 100 guys and we ended up with 38 at the end of the year. People like to tell stories about how tough Wobble Davidson was, but after Jack Carlisle, I was ready for Ole Miss.”

Dennis grew up and Ole Miss fan, admiring quarterback Jimmy Lear and Eagle Day, who ended up becoming a good friend to Dennis when he lived in Jackson.

“When I was a little guy, I would go into the backyard and throw the ball to myself, pretending I was Eagle Day. I was Ole Miss through and through. I got everything I needed at Ole Miss. I played on an SEC Championship team. But I was close to going to Alabama.”

Vaught ended up benefiting from Dennis signing with the Rebels in large part because his assistant, Brusier Kinard, was able to get to Murrah before Alabama and hide him out at the King Edward Hotel.

“I hadn’t made an announcement. I hadn’t really committed to Alabama. I had told them that I was probably coming there. There wasn’t all this committing back then, it was more word of mouth. Coach Bruiser came to my school a day before signing day and I had told them I was going to sign with Ole Miss, but I had not told Bear I wasn’t going to sign with Alabama,” Dennis said. “State was after me pretty hard, too. Anyway Bruiser came to school and told Carlisle that he was taking me out of school. My mother and daddy met us and then we went over to the hotel. Coach Vaught then came down from Oxford, at midnight, and signed me. Billy Clay, another guy that played with me, we were the two at the King Edward.”

Dennis said assistants from Alabama and Mississippi State were looking for him through the day, unable to figure out where he had disappeared. In essence, that was the first time he side-stepped and out-ran defenders in college.

“They knew I would be in school, but Ole Miss got me first and nobody knew where we were, except Coach Carlisle,” Dennis said with a laugh.

Vaught had plans for Dennis, his first big tailback, and those plans ended up providing all types of highlights once he got established.

“Coach Vaught signed 10 fullbacks in my class. A lot of good athletes that they put at a lot of different positions like guard or linebacker or safety,” Dennis said. “That’s one thing that Coach Vaught did. He recruited a lot of quarterbacks and fullbacks. I just had such a good time here.”

In the spring of 1963, Dennis had moved up to the role of the number two tailback. To start the season, Ole Miss traveled up to Memphis and Dennis had yet to play in a varsity game. That was until David Jennings tore his knee in the first quarter.

“Billy Summerall and I were the backs on the Blue team and I ended up playing in that first game. We ended up tying Memphis State 0-0. I wanted the ball down there at the goal line and we ended up doing a couple of quarterback sneaks at the 1-yard line. The next two games, we went to Houston and I caught two touchdown passes and then went to Tulane and I started to get in the flow,” Dennis said. “I got to be the tailback for three years and back then, that was a lot.”

The most memorable win for Dennis, who helped the Rebels win the Southeastern Conference title in 1963, came in 1965, in his final matchup with Mississippi State, a game the Rebels won 21-0 in Starkville.

“We had lost the year before when (quarterback Jimmy) Weatherly got hurt. Our backup quarterback had hurt his arm, so they moved Jimmy Hyland, a defensive back up to play quarterback and I ran the Blue unit as quarterback. I ran the half-back pass a lot. Coach Vaught thought I could throw the ball, but I really couldn’t or not very well,” Dennis said.

Another memorable game involved the Bulldogs in 1963, a game that ended with a 10-10 tie, but it kept the Rebels perfect in the SEC, allowing them to play in the Sugar Bowl against Alabama.

“I also had another game my sophomore year where Weatherly hit me with a pass on the sidelines and took it for a 30-yard touchdown. We were down 7-0 and the score ended up being 10-7 in State’s favor. Then we got down to the goal-line and Coach Vaught decided to tie the game with a field goal and I remember a lot of the guys not being happy,” Dennis said. “We felt like we could have scored and gotten the win. We tied them 10-10 and that won us the SEC. Alabama had lost a game, while we had not, so that tie got us the SEC Championship. That was the last SEC Championship we’ve won.”

Following his career with the Rebels, Dennis played professional football for the Rams. He was one of the last players to be drafted by both an AFL team — the Buffalo Bills — and NFL team — the Atlanta Falcons.

“That was the last year of the double draft and I was taken first by Buffalo. There were eight teams from the AFL and I was in the third round for the Falcons. The Falcons were a brand-new team, expansion team and as a running back, you didn’t want to go there,” Dennis said. “I told Buffalo I was signing with them and they were coming off an AFL Championship. The Rams were always the ones that were coming to talk with me and I thought I was going to be drafted by them. They called me and told me they had gotten my rights from Atlanta and that’s when we had a little wagering there between the Bills and the Rams.”

Los Angeles ultimately won out and Dennis was able to play for another legendary coach in George Allen. Dennis remembers being told by Hall of Famer, Elroy “Crazylegs” Hirsch that the Rams needed running backs and how he would fit in the Rams’ system.

Everything worked according to plan, until two days before the first preseason game when Dennis suffered his first injury in football.

“It was a long way from Mississippi, but it was a good deal for a running back looking to play. I was there five years. George, he wasn’t a rookie coach and football was his life. I worked hard my first year in training camp and I ended up being the starting tailback for the first pre-season game there,” Dennis said. “The game was going to be on a Friday night and Wednesday was the last day in pads and we were working on goal-line stuff and one of the defensive backs trying to make the team came flying in and one of the linebackers wasn’t going to take me down, but that corner hit and just rolled me. I had never missed a game at Ole Miss and run 30 times a game in high school. I tore my knee. They repaired my anterior cruciate, but I lost about a tenth in the 40 after that injury.”

The injury led Dennis to dental school and instead of recovering from his injury in Los Angeles, he was learning how to be a dentist. Dennis was finally able to earn Rookie of the Year in 1968, not long before his professional career melted in a career as a dentist.

Dennis has been in Oxford for a year, taking in athletic events of his grand kids and spending time with his extended family.

“Everything is just great, we all have so much fun and I just love being up here now,” Dennis said. – RN

*This is just a sample of some of the great stories you’ll find in EVERY issue of Rebel Nation Magazine™. The July/August 2015 Ole Miss Football Preview is now available by subscription and in stores all across MS, TN, AL, AR and LA. You can subscribe online here and receive every issue delivered right to your home of office. 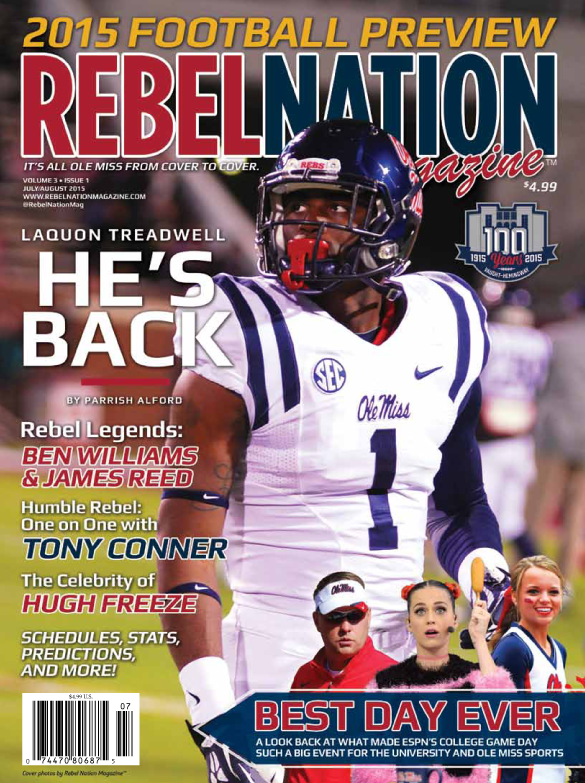