Official Release on the Passing of Justin Reed 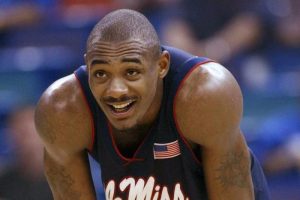 OXFORD, Miss. – Justin Reed, the first Rebel to earn All-SEC honors all four years and the first two-time Wooden Award candidate from a Mississippi college, passed away early Friday morning (October 20, 2017) at the age of 35 following a battle with angiosarcoma.

“We are deeply saddened to hear of the passing of an all-time Rebel great,” said Ole Miss men’s basketball head coach Andy Kennedy. “J. Reed epitomized the qualities of what it means to be an Ole Miss Rebel. Our thoughts and prayers go out to his family and to all those who mourn with us.”

A four-year starter during his time at Ole Miss (2001-04), Reed etched his name in the school record books. Along with becoming the first Rebel to be named All-SEC honors all four seasons, he ranks sixth all-time in scoring (1,785 points) and ninth in rebounds (766).

After four decorated seasons as a Rebel, Reed took his talents to the professional level. The forward from Jackson, Mississippi was the 40th overall pick in the 2004 NBA Draft, selected by the Boston Celtics with the 11th pick of the second round. He was the first SEC player drafted that season.

Reed led the Rebels in scoring and rebounding as a sophomore and junior as well. After averaging 14.6 ppg and 5.3 as a sophomore, he increased his scoring to 15.4 ppg and pulled down 6.6 rpg during his junior campaign.

Stepping on campus as a freshman for the 2000-01 season, Reed averaged 11.0 ppg to help the Rebels capture the SEC Western Division and advance to the Sweet Sixteen of the NCAA Tournament.