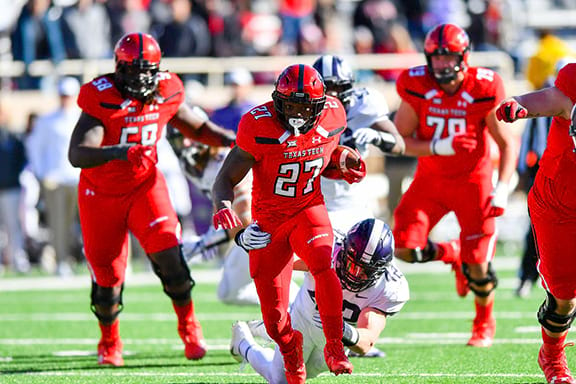 WHAT TO WATCH FOR…
• This game will kick off the 124th season of football at Ole Miss and the second under head coach Matt Luke … The Rebels boast an all-time record of 666-517-35 (.561 winning percentage) … Ole Miss did not field teams in 1897 due to an epidemic of yellow fever, and also in 1943 when football was abolished at all Mississippi state-supported institutions by the Board of Trustees.
• The Rebels are 91-27-5 (.760 winning percentage) in season openers and have taken 18 of the last 21.
• This is the sixth overall meeting between Ole Miss and Texas Tech … The Rebels are 14-12 all-time against the current members of the Big 12.
• Matt Luke is in his 11th season at Ole Miss and second season at the helm, taking the reins of his alma mater as the 38th head coach in program history.
• Ole Miss returns eight starters and 25 lettermen from last year’s offense that led the SEC in passing and ranked top 20 nationally in total offense, passing and red zone offense … The Rebels return seven starters and 27 lettermen from last year’s defense.
• Preseason All-American WR A.J. Brown is coming off a sophomore campaign that saw him set a new single-season program record in receiving yards (1,252).
• Ole Miss set 10 school records during the 2017 campaign.

TEXAS TECH HEAD COACH KLIFF KINGSBURY
Kliff Kingsbury (Texas Tech, 2003) enters his sixth season leading his alma mater and has tallied a 30-33 record during his time in Lubbock. Upon his hiring, Kingsbury became the first Red Raider to return as the program’s head coach. Since then, the Red Raiders have boasted an explosive offense that has annually ranked among the top units in the country. Tech has made three bowl appearances under Kingsbury with the most-recent trip coming at the 2017 Birmingham Bowl. Kingsbury also led Tech to the 2015 AdvoCare Texas Bowl and the 2013 National University Holiday Bowl where the Red Raiders topped No. 16 Arizona State.

TEXAS TECH SCOUTING REPORT
Texas Tech is coming off a 6-7 record in 2016, which included an appearance in the Birmingham Bowl. The Red Raiders began last season by winning three straight games, including a home win over Arizona State in week two, followed by a big road victory over Houston. Texas Tech faltered late down the stretch, losing six of their final eight games. The Red Raiders return 14 starters for 2017, including 10 from the defensive side of the ball. Texas Tech’s list of defensive returners accounts for 184 career starts among them, 154 of which come from the 10 defensive starters who will be back in scarlet and black next fall. Dakota Allen will enter the 2018 campaign ranked among the top players in the country after the senior linebacker led the Red Raiders with 102 tackles a year ago en route to earning All-Big 12 second team honors by the conference coaches. The Red Raiders will bolster an offensive line that has accounted for 83 career starts to be the main catalyst in an offense that will load to replace Nic Shimonek at QB.

OPENERS
The Rebels are 91-27-5 (.760 winning percentage) in season openers and have taken 18 of the last 21. This is the third time in the last five year that Ole Miss has opened the season in a neutral site contest. In 2014, the Rebels defeated Boise State 35-13 in Atlanta but lost to Florida State 45-35 in Orlando to open the 2016 season just two years ago.

WATCH LIST REBELS
Ole Miss players have garnered a bunch of preseason honors this year, including several players tabbed Preseason All-America and Preseason All-SEC by media outlets. The following Rebels have been recognized on watch lists for some of the biggest awards in college football:

LONGO LOADED WITH WEAPONS IN SECOND SEASON AS OC
Offensive coordinator Phil Longo returns for his second season spearheading the Ole Miss offense and has a bevy of weapons at his disposal. Junior All-American and Conerly Trophy winner A.J. Brown returns after setting the Ole Miss single-season record with 1,252 yards. DaMarkus Lodge and D.K. Metcalf join Brown to form one of the most explosive receiving corps in the country. The trio combined for 25 touchdowns last season and make up the only receiving corps in the country that returns three receivers who tallied seven or more touchdown catches during the 2017 season.

Signal-caller Jordan Ta’amu will man the QB spot for the Rebels after starting the last five games behind center. Ta’amu averaged 320.8 yards passing per game during his starts while accounting for 15 touchdowns; 11 through the air and four on the ground. After passing for 418 yards in the win over Louisiana during week 11, Ta’amu became only the second-ever Ole Miss QB in program history to throw for 350 or more yards in three straight games. Ta’amu’s 418 passing yards vs. the Ragin’ Cajuns was the sixth-best passing performance in Ole Miss history. Ta’amu completed more than 66 percent of his passes and threw for 1,682 yards and 11 TDs. including three straight 365-plus yard performances to begin his Ole Miss career.

The Rebels return four of their five starters on the offensive line in Greg Little, Javon Patterson, Sean Rawlings and Alex Givens, as well as Jordan Sims who appeared in 11 contests during the 2016 campaign. The five veteran offensive linemen have a combined 103 starts between them.

NEW BLOOD
On the defensive side of the ball, Wesley McGriff returns seven starters, but the Rebels will have some big shoes to fill with the loss of all-conference performers Marquis Haynes and Breeland Speaks. Haynes, Ole Miss’ modern-era leader in both sacks and tackles for loss, graduated and Speaks decided to forgo his senior season to enter the NFL Draft. The duo combined to record 115 tackles and accounted for more than half of Ole Miss’ 29 sacks.

Also gone is DeMarquis Gates, who led the Rebels in tackles for three straight seasons. Gates’ 114 tackles in 2017 were the most by any Rebel defender since Patrick Willis recorded 137 in 2006.

Defensive tackles Josiah Coatney and Benito Jones, as well as defensive backs Zedrick Woods, Myles Hartsfield, Jaylon Jones and Ken Webster, are all returning starters who will look to anchor the Rebel defense in 2018.

Mac Brown will step in to replace Gleeson, who is sixth all-time in Ole Miss history with 180 punts and manned the position for the last four years. Brown punted five times in 2017 and averaged 42.2 yards per punt.

Junior Jaylon Jones, a preseason All-SEC kick returner by Athlon, will handle kick return duties again in 2018 after finishing third in the SEC with 25.0 yards per return last season.

nWo PRIMED FOR MONSTER SEASON IN 2018
The Ole Miss receiving corps, or the Nasty Wideouts (NWO), returns its top three weapons from 2017 and is primed for a historic 2018 season.

• A.J. Brown, a preseason All-America selection by most major publications, totaled 75 catches for an Ole Miss single-season record 1,252 yards.
• DaMarkus Lodge caught 41 balls for 698 yards and seven touchdowns. Lodge tallied two multiple touchdown games and went over the 100-yard receiving mark twice.
• D.K. Metcalf tallied 39 catches for 646 yards and seven touchdowns on his way to earning SEC All-Freshman honors.
• Ole Miss is the only team in the country with three returning receivers who hauled in seven or more touchdowns during the 2017 season.
• Sophomore Braylon Sanders and seniors Alex Weber and Floyd Allen also return for the Rebels.
• Elijah Moore and Miles Battle are incoming freshmen that will join a talented receiving corps in 2018 and could make a quick impact as true freshmen.

124TH SEASON OF OLE MISS FOOTBALL
This game will kick off the 124th season of football at Ole Miss and the second under head coach Matt Luke. The Rebels boast an all-time record of 666-517-35 (.561 winning percentage). Ole Miss did not field teams in 1897 due to an epidemic of yellow fever, and also in 1943 when football was abolished at all Mississippi state-supported institutions by the Board of Trustees. Ole Miss’ first-ever victory came in a 56-0 drubbing of Southwestern Baptist University (Union University) in Oxford back in 1893.

LUKE’S WEEKLY RADIO SHOW ON TUESDAYS
RebTalk, the official weekly radio show of Ole Miss Athletics, is moving to a new day and location for this season. Beginning Aug. 28, RebTalk will be broadcast each Tuesday this fall at Bouré in downtown Oxford from 7-8 p.m. The show, which is hosted by the “Voice of the Rebels” David Kellum and includes special guests, will air live on the Ole Miss IMG Sports Network. Ole Miss Football head coach Matt Luke and select players will join the broadcast each Tuesday throughout the 2018 season. There is no show scheduled for Oct. 23, the Rebels’ bye week.

Roots of the Landshark at Ole Miss date back to 2008. After four straight losing seasons, the Rebel football team returned to national prominence with a 9-4 record and a victory over 7th-ranked Texas Tech in the Cotton Bowl. Leading the charge was a defensive squad that ranked fourth in the nation in rushing defense and included All-American Peria Jerry and eventual All-SEC standout Jerrell Powe. – RN

Don’t miss an issue of Rebel Nation Magazine™! It’s All Ole Miss from Cover to Cover! Click here to subscribe.