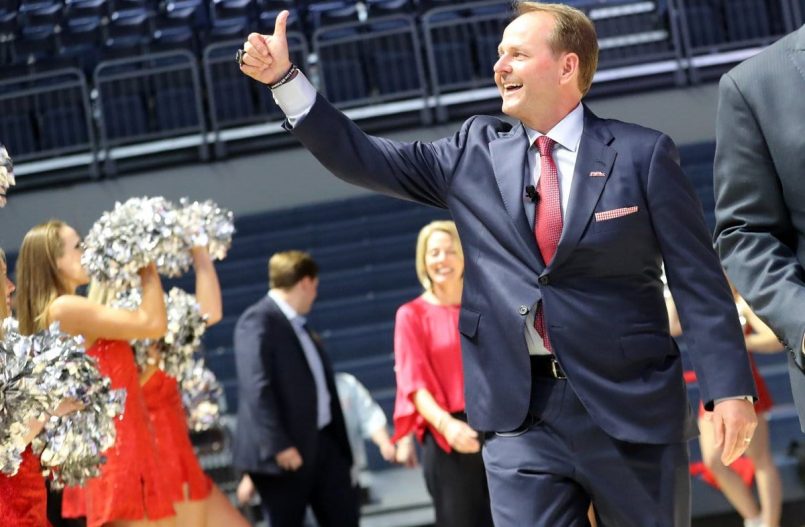 OXFORD, Miss. – The Ole Miss men’s basketball team released its non-conference slate for the 2018-19 season Tuesday afternoon. Seven of the Rebels’ 13 non-conference games will be played at home, starting with the season opener versus Western Michigan (Nov. 10).

“We feel there are some great opportunities with our non-conference schedule this season,” said Ole Miss head men’s basketball coach Kermit Davis. “Facing the likes of Baylor, Butler, Iowa State and possibly Cincinnati, we’ll go up against some excellent Power 5 teams and balance that with some high-quality mid-major teams that can make the NCAA Tournament. Also, I’m looking forward to our game in Jackson and taking Ole Miss Basketball on the road to our great fan base in the state’s capital.”

Ole Miss will face at least six non-conference foes that made postseason play last year. Along with the seven games taking place at The Pavilion at Ole Miss, the Rebels will play four neutral-site games and two road games. All game times are still to be determined and will be announced at a later date.

After lifting the lid on the 2018-19 campaign at home versus the Western Michigan, the Rebels head to Indianapolis for a matchup against Butler (Nov. 16). Nicholls makes the trip to The Pavilion (Nov. 20) before Ole Miss heads to Destin, Florida for the Emerald Coast Classic (Nov. 23-24). The Rebels will begin basketball on the beach versus Baylor (Nov. 23) before battling either Cincinnati or George Mason (Nov. 24). Ole Miss rounds out the opening month of the season by hosting San Diego (Nov. 28).

Kicking off December, the Rebels welcome the Warhawks of ULM to The Pavilion before traveling to Illinois State one week later (Dec. 8). For the first time since the 2007-08 campaign, Ole Miss will play a game in Jackson, Mississippi. The Rebels will square off against Southeastern Louisiana at Mississippi Coliseum (Dec. 12) for a midweek matchup. Three days later, the Rebels host Chattanooga for the final home game prior to Christmas.

Ole Miss will face Coach Davis’ former team, Middle Tennessee, at Bridgestone Arena in Nashville, Tennessee for a neutral site contest (Dec. 21). Closing out the 2018 calendar year, the Rebels will play Florida Gulf Coast at The Pavilion (Dec. 29). The only other non-conference game will take place Jan. 26 as Ole Miss hosts for the SEC/Big 12 Challenge.

The Rebels return five players from last year’s squad that played in all 32 games, including three that averaged double figures in scoring. Terence Davis, the team’s leading scorer at 13.8 ppg, is back for his senior season. Bruce Stevens and Breein Tyree return as well after averaging 10.8 ppg apiece during the 2017-18 season. After their first season as Rebels, Dominik Olejniczak and Devontae Shuler bring experience to the court as well.