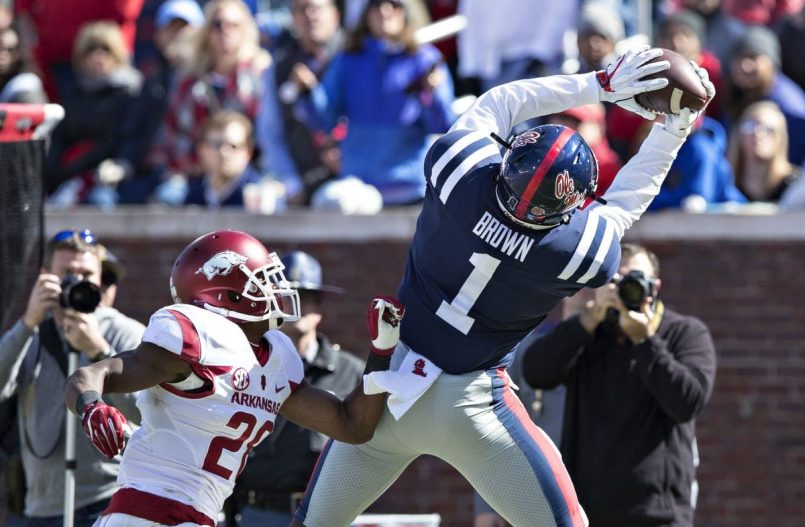 WHAT TO WATCH FOR
• Ole Miss and Arkansas will be meeting for the 65th time in a series that dates back to 1908.
• Ole Miss records show the Rebels trailing the series 28-35-1, while Arkansas’ records indicate a 36-27-1 advantage for the Razorbacks … Arkansas claims a forfeit victory in a 1914 game that Ole Miss won 13-7.
• Arkansas holds a 16-10 edge since it joined the SEC in 1992.
• Ole Miss leads 8-6-1 in games played in Little Rock, including three straight in the state capital.
• This is the first meeting in Little Rock since 2012 and just the second at War Memorial Stadium since 1993.
• The Ole Miss defense has forced at least two turnovers in five straight games for the first time since 2014.
• The Rebels lead the SEC and rank 11th nationally in red zone offense (.957).
• Ole Miss has converted 80 percent of its fourth down attempts, which ranks second in the SEC and ninth in the NCAA.
• QB Jordan Ta’amu leads the SEC and ranks amongst the top 10 in the NCAA in passing yards (1,911) and passing yards per game (318.5) … Ta’amu ranks sixth nationally with 15.93 yards per completion.
• RB Scottie Phillips leads the SEC and ranks seventh nationally in both rushing touchdowns (eight) and total TDs … Phillips’ 637 yards rushing is third in the conference and 11th in the NCAA.
• WRs A.J. Brown (586), D.K. Metcalf (520), DaMarkus Lodge (386) rank first, third and sixth respectively in the SEC in receiving yards.
• Ole Miss is the only team in the country to have three receivers to average 75 or more receiving yards per game.

ARKANSAS HEAD COACH CHAD MORRIS
Chad Morris (Texas A&M, 1992) is in his first year as Arkansas’ head coach and comes into Saturday’s game with a 1-5 record to start his head coaching campaign in Fayetteville, Arkansas. Morris, who owns a 15-27 overall coaching record, was head coach at SMU from 2015-17 after a four-year stint as the offensive coordinator at Clemson. During his three seasons at SMU, Morris took the Mustangs from a 1-11 campaign in 2013 before he took over to the program’s first bowl bid since 2012 with a 7-5 mark last season. Morris inherited an offense that ranked last (128th) in the FBS in scoring in 2014 (11.8) and turned it into the nation’s eighth-highest scoring offense (40.1) in 2017. The 2017 SMU offense marked the fourth time and third different program that Morris has either been the head coach or offensive coordinator of that has finished in the top 10 in the FBS in scoring average at more than 40 points per game. During his four years at Clemson as offensive coordinator, Morris helped the Tigers post a 41-11 record and two BCS Orange Bowl appearances. He spent 16 years as a high school head coach in Texas, winning three state titles and earning Coach of the Year honors 11 times.

ARKANSAS SCOUTING REPORT
The Arkansas Razorbacks currently sit at 1-5 overall and 0-3 in the SEC. Arkansas is coming off a 65-31 conference loss to top-ranked Alabama on Saturday. The Razorbacks won their season opener vs. Eastern Illinois, 55-20, but have dropped five straight as they host the Rebels in Little Rock, Arkansas. Arkansas is last in the SEC, averaging just over 350 yards of total offense per game. The Razorbacks do most of its damage on offense through the air, averaging 211 passing yards compared to 146 yards rushing per game, which ranks last in the SEC. Junior quarterback Ty Storey has started four games for Arkansas, including the last three. Storey has completed 69-of-126 passes on the season for 861 yards and six touchdowns. He is coming off a 230-yard performance against Alabama. La’Michael Pettway leads all Arkansas receivers with 200 yards receiving and three touchdowns. Junior college transfer and former A&M running back Rakeem Boyd has taken over duties in the backfield after Devwah Whaley, a preseason All-SEC selection, was injured earlier in the year. Boyd has responded with several good games, including a 102-yard rushing effort vs. Alabama. It was the first time a Razorback has rushed for 100+ yards against Alabama since Darren McFadden in 2007. Arkansas’ defense has allowed 405.7 yards of total offense per game including 271 yards through the air. Junior linebacker De’Jon Harris leads the SEC and ranks 18th nationally with 10.7 tackles per game. Senior defensive lineman Armon Watts is ninth in the SEC with 0.67 sacks per game.

SCOTTIE TODDY
RB Scottie Phillips is quickly becoming a force to be reckoned with in the Ole Miss backfield. The junior college transfer is top three in the SEC and top 20 nationally in nearly every rushing category. Phillips ranks first in the SEC in rushing touchdowns (eight), yards per carry (7.08), total points (60) and total touchdowns (10). His 637 rushing yards ranks third in the conference and 11th nationally. Phillips has recorded at least one rushing TD in five of the Rebels’ six contests this season.

SWITCHING THINGS UP
Headed into the season, a majority of Ole Miss’ experience on the defensive side of the ball was in the secondary. Season-ending injuries to three Rebel defensive backs (Montrell Custis, Jaylon Jones, C.J. Moore) have forced Ole Miss to make several changes to its defense. Armani Linton and Tylan Knight, who have both seen time at running back in 2018, both switched to defense prior to the Rebels’ game vs. ULM. Linton, who played DB for his first two years at Ole Miss, finished second on the team with six tackles against the Warhawks, playing all over the Ole Miss secondary. Linton also posted one sack, 1.5 tackles for loss and one QB pressure. Playing in his first collegiate game on the defensive side of the ball, Knight tallied three total tackles with a half tackle for loss and one quarterback hurry.

REMEMBER THE NAME
Despite the fact that he’s just made 11 career starts in a Rebel uniform, QB Jordan Ta’amu is quickly etching his name in the Ole Miss record books. Against ULM on Saturday, he completed 21-of-24 passes for 374 yards and three TDs. Ta’amu also rushed for 63 yards and two TDs on the ground. Ta’amu’s 437 yards of total offense were the ninth most in school history, despite not even playing in the second half. He now has four of the top 10 total offense  single-game performances in program history, the most ever by any Ole Miss player. Ta’amu’s three 400-yard passing games are also the most by any Rebel quarterback in school history. Ta’amu currently ranks 12th all-time in career passing yards at Ole Miss with 3,593.

PATTERSON’S FOOTLOCKER
Seeing a need in his community, OL Javon Patterson, along with other members of Ole Miss’ Student-Athlete Advisory Committee (SAAC), has started Patterson’s Footlocker, a collection effort to gather new socks for homeless shelters in Mississippi, on Oct. 15, 16 and 20. Donations can be dropped off at Vaught-Hemingway Stadium’s visitor bus parking area on Oct. 15 from 5 until 6:30 p.m. and again on Oct. 16 from 11:30 a.m. till 1:30 p.m. Fans can also bring items to Ole Miss’ Oct. 20 game vs. Auburn, gates yet to be determined. Besides new socks, gently used shoes will also be accepted. Since arriving in Oxford, Patterson has led with a spirit of compassion, volunteering for multiple community service activities such as Hope to Dream, Rebelthon and reading to local elementary students.

OFFENSIVE EXPLOSION
In its 70-21 win over ULM, Ole Miss set a school record in both total offense (826) and passing yards (517). The 826 total yards were the second-most ever by an SEC team and are the most by any FBS team this season. Ole Miss offense scored touchdowns on its first nine drives of the game. The 49 first half points are the most in a half in the modern era (since 1958); the previous best was 42 in the second half vs. Houston in 1958. The 536 yards in the first half were the most first half yards by an SEC team over the last 15 years. It marked the second time this season Ole Miss has scored more than 70 points. It’s just the second time in school history that the Rebels have tallied 70 or more points twice in a season.

A ‘SPECIAL’ WEAPON
Replacing Ole Miss’ all-time leading scorer and leader in almost every kicking category (Gary Wunderlich) is no easy task, but through the season’s first six games, K Luke Logan is proving that he’s worthy of that challenge. Logan is 8-of-9 on the season in field goal attempts including a career-long 40-yard field goal at No. 5 LSU. The sophomore currently ranks second in the SEC and 14th nationally in field goal percentage (.889). Logan is fifth in the conference in scoring with 9.0 points per game.

GONE IN 60 SECONDS
The Ole Miss offense ranks fifth in the country with nine scoring drives this season that have been under one minute, including seven drives of two plays or less. Those nine scoring drives under a minute have averaged just under 32 seconds and 67 yards per drive.

HOT IN THE RED ZONE
The Rebels rank second 11th in the country with a red zone scoring percentage of 95.7. The Rebels have converted 22-of-23 chances from inside the 20, including 15 TDs. Eleven of the 15 Ole Miss red zone touchdowns have come on the ground.

124TH SEASON OF OLE MISS FOOTBALL
It’s the 124th season of football at Ole Miss and the second under head coach Matt Luke. The Rebels boast an all-time record of 670-519-35 (.566 winning percentage). Ole Miss did not field teams in 1897 due to an epidemic of yellow fever, and also in 1943 when football was abolished at all Mississippi state-supported institutions by the Board of Trustees.