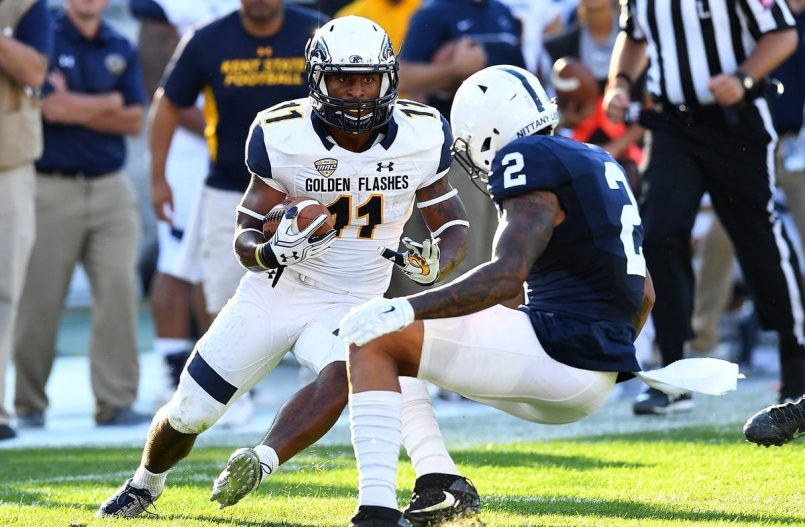 WHAT TO WATCH FOR:
• Ole Miss wraps up its three-game home stand this week when it hosts Kent State in a non-conference tilt.
• This is the first all-time meeting between Ole Miss and Kent State … The Rebels are 2-0 against current members of the MAC.
• Ole Miss is 117-40-6 (.736 winning pct.) all-time versus non-conference opponents during the month.
• Ole Miss is 103-33-3 (.752 winning pct.) in September home games (including home contests played in Memphis and Jackson), including a 77-20-2 (.788 winning percentage) mark in September games played in Oxford.
• Ole Miss is 164-87-7 (.649 winning pct.) all-time during the month of September.
• The Ole Miss defense has forced at least two turnovers in back-to-back games for the first time since 2016.
• QB Jordan Ta’amu is second in the SEC in multiple categories, including: passing yards (917), passing yards per game (305.7) and passing yards per completion (17.63) … Ta’amu ranks third in the SEC in passing TDs (8) and fourth in passing efficiency (174.1).
• RB Scottie Phillips leads the SEC with four rushing touchdowns … He ranks third in total rushing yards (355).
• Phillips is averaging 8.26 yards per carry, second in the SEC and sixth in the NCAA.
• Two true freshmen led Ole Miss in tackles vs. Alabama … LB Jacquez Jones had a game-high nine tackles to lead the Ole Miss defense, while fellow freshman Keidron Smith was second on the team with seven tackles.
• DB Zedrick Woods and LB Mohamed Sanogo both rank eighth in the SEC with 6.7 tackles per game.

KENT STATE HEAD COACH SEAN LEWIS
Sean Lewis (Kent State, 1973) is in his first season at the helm for Kent State and has started his career with a 1-2 record in Kent, Ohio. Lewis came to the Golden Flashes after serving as the co-offensive coordinator and quarterbacks coach under Dino Babers at Syracuse. His background stretches from his four-year playing career at the University of Wisconsin under Barry Alvarez, to winning the 2015 Mid-American Conference (MAC) Championship as the co-offensive coordinator at Bowling Green. That ascension led Lewis to becoming the youngest Football Bowl Subdivision (FBS) head coach in the nation at the age of 31. That distinction was previously held by the University of Oklahoma’s Lincoln Riley at age 34. Lewis spent his previous six seasons alongside head coach Babers at Syracuse (2016-17), Bowling Green (2014-15) and Eastern Illinois (2012-13). A tight end and quarterback at Wisconsin, Lewis was a two-time Academic All-Big Ten selection under Alvarez. Current Wisconsin Badger head coach Paul Chryst served as his offensive coordinator and position coach.

KENT STATE SCOUTING REPORT
Under first-year head coach Sean Lewis, Kent State has started the 2018 campaign 1-2, with both its losses coming against Power Five opponents, Illinois and Penn State. Kent State’s Week 2 54-14 win over Howard was largest margin of victory for the Golden Flashes since 2004. Kent State is averaging 395 yards of offense per game, including 193 yards on the ground and 202 through the air. Their 355 yards rushing against Howard were the most for the Golden Flashes since 2012. Kent State is led by sophomore Woody Barrett. Barrett is averaging 200.7 yards passing and 39.0 yards on the ground, with six total TDs. Running backs Justin Rankin and Jo-el Shaw have been sharing the workload in the Kent State backfield with both backs averaging over 60 yards per game and more than 5.8 yards per carry. In his first FBS game, Shaw rushed for 105 yards and three touchdowns against Howard, including a 15-yard TD on his first carry. Fifth-year linebacker Matt Bahr leads Kent State with 27 total tackles, including two quarterback hurries and a forced fumble. Next to Bahr is first team All-MAC selection Jim Jones. Jones finished the 2017 season with 98 tackles and eight tackles-for-loss.

SCOTTIE TODDY
RB Scottie Phillips has quickly burst onto the scene for Ole Miss and has been a key component in an Ole Miss offense that averages 43.3 points per game and over 480 yards in total offense per game. Phillips, a junior college transfer from Jones County CC, is top three in the SEC in rushing yards (355), rushing TDs (4) and yards per carry (8.26). Phillips debuted with a historic 200-yard game against Texas Tech and then rushed for 107 yards and two touchdown against Southern Illinois in Week 2. His 204 rushing yards during the season opener were the second-most during College Football’s opening weekend and are the most by an Ole Miss running back making his debut. Phillips became just the eighth running back to run for over 200 yards in a game.

YOUNG REBELS
Taking on top-ranked Alabama in their first marquee game of their college careers, three true freshmen shined for the Rebels. Three of Ole Miss’ top four tacklers against the Crimson Tide were freshmen. LB Jacquez Jones had a game-high nine tackles to lead the Ole Miss defense, while fellow freshman Keidron Smith was second on the team with seven tackles, including a team-high five solo tackles. After missing last week’s game vs. Southern Illinois, LB Kevontae’ Ruggs recorded four tackles to finish fourth on the team in that category.

The Ole Miss offense ranks third in the country with six scoring drives this season that have been under one minute, including four drives of two plays or less. Those six scoring drives under a minute have averaged just over 32 seconds and 69 yards per drive.

OLE MISS OFFENSE OFF TO FAST START
• Ole Miss is a perfect 9-for-9 in redzone opportunities, with five touchdowns and four field goals.
• The Rebels are just one of three teams in the nation to have six or more scorings drives under a minute.
• Through the first three games, the Rebels have recorded 21 or more points in a quarter three times this season.
• RB Scottie Phillips is not only amongst the top SEC running backs statistically, but he’s top 20 in the nation in multiple
• QB Jordan Ta’amu is second in the SEC in passing yards (917), passing yards per game (305.7) and passing yards per completion (17.63) … Ta’amu’s eight passing TDs are third in the conference.
• Ta’amu is now 15th on Ole Miss’ all-time charts in career passing yardage with 2,599.
• WRs A.J Brown and D.K. Metcalf are tied for second in the SEC with three receiving touchdowns.

124TH SEASON OF OLE MISS FOOTBALL
It’s the 124th season of football at Ole Miss and the second under head coach Matt Luke. The Rebels boast an all-time record of 667-517-35 (.562 winning percentage). Ole Miss did not field teams in 1897 due to an epidemic of yellow fever, and also in 1943 when football was abolished at all Mississippi state-supported institutions by the Board of Trustees.

RebTalk, the official weekly radio show of Ole Miss Athletics, is moving to a new day and location for this season. Beginning Aug. 28, RebTalk will be broadcast each Tuesday this fall at Bouré in downtown Oxford from 7-8 p.m. The show, which is hosted by the “Voice of the Rebels” David Kellum and includes special guests, will air live on the Ole Miss IMG Sports Network. Ole Miss Football head coach Matt Luke and select players will join the broadcast each Tuesday throughout the 2018 season. There is no show scheduled for Oct. 23, the Rebels’ bye week.

At Ole Miss, Landshark is a term that was first adopted by the Rebel football team’s defensive unit. As part of that identity, defensive players celebrate big plays by putting a hand to their forehead in the shape of a shark fin. A battle cry of “Fins Up” also contributes to the players’ persona. With the popularity of both the players and the hand gesture, Ole Miss fans and student-athletes from other sports embraced the spirit of the Landshark, and in October 2017, the university announced the Landshark as the official mascot of the Ole Miss Rebels. – RN