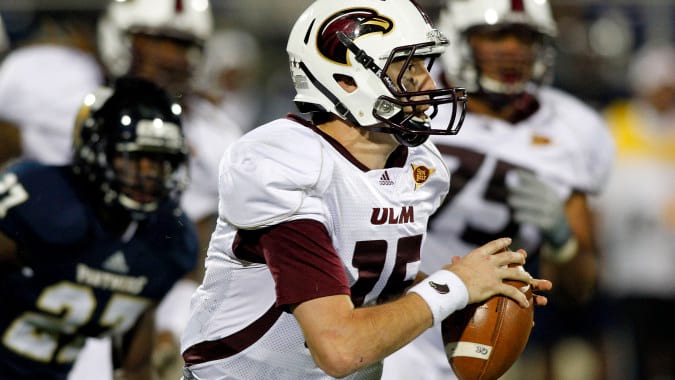 ULM HEAD COACH MATT VIATOR
Matt Viator (McNeese State, 1986) is in his third year as ULM’s head coach and owns a 10-19 record for the Warhawks. Viator has posted back-to-back 4-8 seasons in Monroe. Viator, 88-52 overall in 13 overall seasons as a head coach, arrived at ULM in 2015 after spending the previous 10 years as head coach at McNeese State. During his 10 seasons at the helm of the McNeese State football program, he posted a 78-33 record (.703 winning percentage) and tied for most all-time wins in program history. Over the course of his 10 seasons at McNeese, Viator averaged just under eight wins per season and never had a losing season. He coached three different teams to 10-win seasons. He also finished with a 54-18 mark in Southland Conference play during his 10 seasons. His 54 league wins are the most in league history. In 2015, Viator led the Cowboys to a 10-0 regular season record and an appearance in the second round of the FCS Playoffs against Sam Houston State. Viator, who led the Cowboys to a perfect 9-0 record in Southland Conference play, was named the league’s coach of the year. He also was a finalist for both the Eddie Robinson National Coach of the Year award as well as the STATS FCS National Coach of the Year award.

ULM SCOUTING REPORT
The ULM Warhawks currently sit at 2-3 overall and 0-2 in the Sun Belt Conference. ULM is coming off a 46-14 conference loss to Georgia State on Saturday. The Warhawks opened the 2018 season 2-0 following wins over Southeastern Louisiana and Southern Miss, but have dropped three straight as they head into Oxford. ULM averages just over 400 yards of total offense per game. Their passing attack ranks third in the Sun Belt with 238.6 yards per game and a rushing attack that averages 163.4 yards on the ground. Dual-threat quarterback Caleb Evans is second in the Sun Belt in passing yards (238.4 per game) and total offense (291.2 ypg.). His 22.6 pass completions per game is ranked 15th in the NCAA. Evans leads the Warhawks on the ground as well, rushing for 264 yards and three rushing TDs, averaging nearly five yards per carry. Evans favorite target through the air is senior wideout Marucs Green. Green, a Pontotoc, Mississippi, native, has hauled in 19 catches for 332 yards and a conference-best four receiving TDs on the season. Junior RJ Turner is right behind Green with 18 catches in 2018 for 211 yards. The Warhawks’ offensive line is ranked second in the Sun Belt, only allowing 1.4 sacks per game. ULM’s defense has allowed 471.8 yards of total offense per game including 300 yards through the air. The Warhawks have allowed 325 or more passing yards in three of their first five games. Senior safety Collin Turner leads ULM with 37 total tackles on the season.

SCOTTIE TODDY
RB Scottie Phillips has quickly burst onto the scene for Ole Miss and has been a key component in the Rebels’ offense that averages 36.8 points per game and over 483 yards in total offense per game, which ranks 24th in the NCAA. Phillips, a junior college transfer from Jones County CC, has rushed for 100 yards or more in three of his first five games in an Ole Miss uniform. Phillips is third in the SEC in rushing yards (563) and second in rushing TDs (six). His 122.2 all purpose yards per game ranks third in the SEC. Phillips is averaging 7.22 yards per carry, which currently leads the SEC and ranks 10th nationally. Phillips has scored at least one touchdown in all but one game this season.

TACKLING MACHINE
LB Mohamed Sanogo is coming off a game which saw him tally a career-high 12 tackles vs. LSU. The sophomore from Plano, Texas, ranks fifth in the SEC with 7.8 tackles per game and has led the Rebels in tackles in three of the last four contests. Sanogo has also been a large part in turnovers for an Ole Miss defense that has forced at least two turnovers in four straight games for the first time since 2014. He has forced a fumble in back-to-back games for the Rebels.

A ‘SPECIAL’ WEAPON
Replacing Ole Miss’ all-time leading scorer and leader in almost every kicking category is no easy task, but through the season’s first five games, K Luke Logan is proving that he’s worthy of that challenge. Logan is 8-of-9 on the season in field goal attempts including a career-long 40-yard make on Saturday at No. 5 LSU. The sophomore currently ranks second in the SEC in field goal percentage (.889) and third in field goals per game (1.6). Logan leads the Rebels in scoring with 8.8 points per game.

GONE IN 60 SECONDS
The Ole Miss offense ranks sixth in the country with seven scoring drives this season that have been under one minute, including five drives of two plays or less. Those seven scoring drives under a minute have averaged just over 32 seconds and 69 yards per drive.

HOT IN THE RED ZONE
The Rebels rank second 19th in the country with a red zone scoring percentage of 94.1. The Rebels have converted 16-of-17 chances from inside the 20, including nine TDs. Eight of the nine Ole Miss red zone touchdowns have come on the ground.