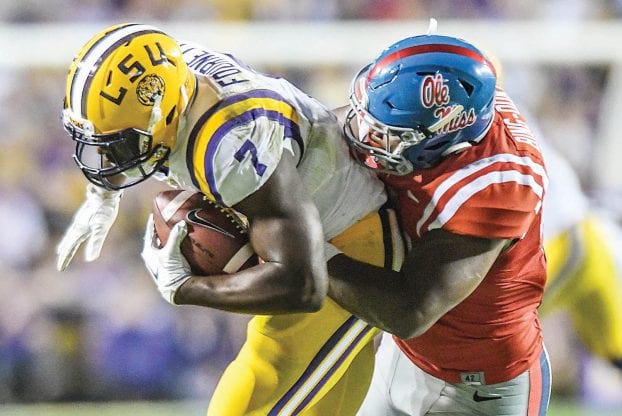 WHAT TO WATCH FOR
• This game marks the 107th all-time meeting between the Ole Miss Rebels and LSU Tigers dating back to 1894.
• LSU is Ole Miss’ second-most played opponent behind Mississippi State, whom the Rebels will play for the 115th time on Nov. 22.
• LSU holds a 61-41-4 advantage in the series, 40-24-1 in Baton Rouge.
• The home team has won five of the last six meetings.
• Since the rivals started playing for the Magnolia Bowl trophy in 2008, LSU holds a 6-4 edge.
• Ole Miss is 165-87-7 (.651 winning pct.) all-time during the month of September.
• The Ole Miss defense has forced at least two turnovers in three straight games for the first time since 2014.
• QB Jordan Ta’amu is top 10 nationally in multiple categories, including: passing yards (1,359), passing yards per game (339.8) and passing yards per completion (16.99) … Ta’amu ranks 15th in the NCAA in passing TDs (10) and 14th in passing efficiency (176.9).
• RB Scottie Phillips ranks second in the SEC and 12th nationally with five rushing touchdowns … He ranks 11th in the NCAA in total rushing yards (467).
• Phillips is averaging 7.53 yards per carry, first in the SEC and 10th in the NCAA.
• DE Markel Winters ranks second in the SEC and seventh nationally with 1.17 sacks per game.
• DB Zedrick Woods and LB Mohamed Sanogo both rank ninth in the SEC with 6.8 tackles per game.

LSU HEAD COACH ED ORGERON
Ed Orgeron (Northwestern State, 1984) is in his third year – second full year – as LSU’s head coach and has a 19-6 record with the Tigers, including a 4-0 mark so far this season. Orgeron, who led the Tigers to a 9-4 record last season and a 5-2 mark as interim coach over the final two months of the 2016 season, was named LSU’s permanent head football coach on Nov. 26, 2016. Orgeron, a native of Larose, Louisiana, is LSU’s 33rd head football coach, and the first Louisiana native to serve as head coach of the Tigers since West Monroe native Jerry Stovall held the position for three seasons in the early 1980s. Orgeron, who has also served as head coach at Ole Miss and Southern Cal, is 20-6 in his past 26 games as a head coach. Overall, Orgeron has a 35-33 overall mark as a collegiate head coach, including a 10-25 mark with the Rebels from 2005-07. Of LSU’s six losses under Orgeron, three have come by six points or less and two others came against the nation’s No. 1 ranked team. Furthermore, of Orgeron’s 19 LSU wins, 11 have come against SEC foes and 15 have been by double-digits.

LSU SCOUTING REPORT
The LSU Tigers currently sit at 4-0 overall, 1-0 in SEC play and are ranked No. 5 in the AP Poll and No. 6 in the Coaches Poll. LSU is coming off a 38-21 win over Louisiana Tech in which saw the Tigers rush for 218 yards and five TDs on the ground. Two of LSU’s four wins have come against teams ranked in the top 10, including a 22-21 win at No. 7 Auburn to open SEC play. The Tigers opened the 2018 season with a 33-17 victory over No. 8 Miami at AT&T Stadium in Arlington, Texas. The LSU offense averages 352.5 yards of offense per game, with 169.8 yards coming on the ground and 182.8 through the air. Joe Burrow, a transfer from Ohio State, will lead the Tiger offense under center. Burrow has thrown for 751 yards (182.8 ypg) yards and a completion rate of 49.1 percent, with three touchdowns and no interceptions. Burrow’s favorite target is sophomore wideout Justin Jefferson. On the season, Jefferson has hauled in 13 catches for 195 yards. Nick Brossette leads the way for a dangerous Tiger rushing attack. Brossette has rushed 83 times for 409 yards and five touchdowns on the ground. Clyde Edwards-Helaire has also rushed for 208 yards and four scores on the season. On the other side of the ball, LSU ranks eighth in the SEC in total defense (335.3) and second in the SEC and ninth nationally in rush defense (91.3). Sophomore CB Greddy Williams leads the SEC and ranks 10th nationally with two interceptions on the season. Outside linebacker Michael Divinity, Jr. is third in the SEC with 1.7 tackles for loss per game.  Kicker Cole Tracy is 9-of-10 in field goal attempts, including two makes of 50 yards or more. Sophomore punter Zach Von Rosenberg ranks third in the NCAA with 48.0 yards per punt.

400-YARD PASSING GAMES
Ole Miss quarterback  Jordan Ta’amu had a monster game Saturday vs. Kent State in a 38-17 win over the Golden Flashes. Ta’amu, a senior from Pearl City, Hawaii, completed 28-of-38 for 442 yards and two touchdowns through the air. Ta’amu also tallied his fourth career rushing TD, first this season. It was Ta’amu’s third 400-yard passing effort of his career, the most by an Ole Miss quarterback in program history. Four other Ole Miss quarterbacks have surpassed the 400-yard mark twice in their career. Ta’amu has already accomplished that feat twice this season, in just four games.

SACK ATTACK
Coming into Saturday’s contest vs. Kent State, Ole Miss had just two sacks through three games; that quickly changed vs. the Golden Flashes. The Rebels recorded seven sacks vs. Kent State and tallied 15 tackles for loss in a 38-17 win. Defensive end Markel Winters became just the third Rebel since 2010 to get three sacks in a single game joining Marquis Haynes (2017) and Jonathan Cornell (2010). Sophomore end Charles Wiley also recorded a career-high 2.5 sacks in the victory over Kent State.

SCOTTIE TODDY
RB Scottie Phillips has quickly burst onto the scene for Ole Miss and has been a key component in the Rebels’ offense that averages 42.0 points per game and over 520 yards in total offense per game, which ranks 14th in the NCAA. Phillips, a junior college transfer from Jones County CC, has rushed for 100 yards or more in three of his first four games in an Ole Miss uniform. Phillips is second in the SEC in rushing yards (467), rushing TDs (five), all purpose yareds per game (128.75) and total TDs (six). His 7.53 yards per carry leads the SEC and ranks 10th nationally. Phillips has scored at least twice in three games this season.

MOORE TURNOVERS
The Ole Miss defense has forced at least two turnovers in three straight games for the first time since 2014 and senior defensive back C.J. Moore has been a large part of that equation. Moore has tallied back-to-back games in which he’s recovered a fumble recovery. He also recorded an interception two weeks ago against top-ranked Alabama. His two fumble recoveries lead the SEC and rank third in the NCAA.

GONE IN 60 SECONDS
The Ole Miss offense ranks fourth in the country with seven scoring drives this season that have been under one minute, including five drives of two plays or less. Those seven scoring drives under a minute have averaged just over 32 seconds and 69 yards per drive.

HOT IN THE RED ZONE
The Rebels rank second 24th in the country with a red zone scoring percentage of 92.9. The Rebels have converted 13-of-14 chances from inside the 20, including eight TDs. Seven of the eight Ole Miss red zone touchdowns have come on the ground.

VS. KENT STATE: BEYOND THE NUMBERS
• QB Jordan Ta’amu has played several good games this year but his performance vs Kent State was the best of his season thus far. Ta’amu’s overall grade of 91.6 was the fourth highest in the nation among QBs this week. Ta’amu was only under pressure on 16% of his dropbacks which helped him record a season-high adjusted completion percentage of 80.6%. Ta’amu was at his best when utilizing play action. Ta’amu used play action on 44% of his dropbacks in Week 4 (16th highest rate in the nation). With play action vs Kent State: 14.4 yards per attempt + a passer rating of 132.6. Without play action: 9.4 yards per attempt + a passer rating of 100.6. Ta’amu’s overall passer rating with play action 2018 of 136.1 ranks #2 in the SEC (behind Jake Fromm) + his 14.2 yards per attempt are also #2 in the confernce to Fromm. Ta’amu’s completion rate is four percent higher with play action vs without it this season.
• WR DK Metcalf hauled in five of his six targets vs Kent State for 102 yards (45 yards AFTER the catch), one TD and a perfect passer rating when targeted of 158.3. Metcalf has a reception of 40+ yards in all four games played this season and has scored a TD in 5 straight dating back to last year. Metcalf’s 225 deep pass receiving yards in 2018 rank him second among WRs in the SEC currently. Metcalf and fellow WR AJ Brown are two of the four SEC WRs this season with three deep pass TDs.
• DT Charles Wiley had a breakout game vs Kent State. Wiley recorded five total tackles, three sacks and two hurries while logging an NCAA career-high 42 defensive snaps. Wiley’s five QB pressures were tied for the most among interior defenders in the SEC this past week and his pass rush productivity of 13.5 ranked fifth. Wiley has nearly played as many snaps this season (79) as he did all of last year (98).
• Ole Miss now currently boasts two of the top five pass blocking offensive tackles in the SEC. Greg Little (98.8) and Alex Givens (98.6) are both ranked in the top five among all SEC offensive tackles in pass block efficiency. Givens has allowed just one sack and one hurry on 129 pass blocks while Little has surrendered zero sacks, no QB hits and just two hurries on 122 pass blocks. Little has also not been called for a single penalty this season after being flagged for four last year. – RN