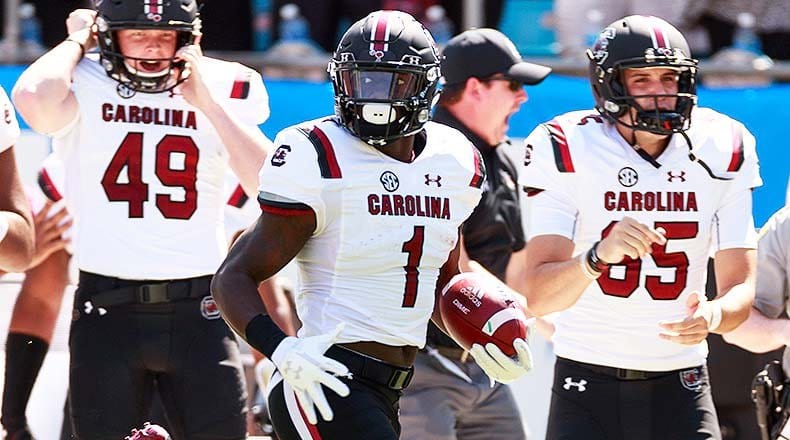 WHAT TO WATCH FOR
• This will be the 16th meeting between Ole Miss and South Carolina dating back to 1947, and the seventh since the Gamecocks joined the SEC in 1992.
• The Rebels lead the series 8-7 and have won five of the last seven meetings … Ole Miss is 3-2 in games played in Oxford.
• Ole Miss is first in the SEC in passing (349.1 ypg), second in total offense (537.9) and third in scoring (38.4 ppg).
• The Rebels have only lost two fumbles all season long, which ranks fifth in the NCAA.
• Ole Miss has thrown for 300 or more yards in six of its eight games this season, including two games of 400 or more yards.
• DT Mohamed Sanogo tallied a career-high 16 tackles in Ole Miss’ last contest … It was the most by an Ole Miss defender in 11 years.
• QB Jordan Ta’amu leads the SEC and ranks amongst the top five in the NCAA in passing yards (2,622) and passing yards per game (327.8) … Ta’amu ranks fifth nationally with 15.16 yards per completion.
• Ta’amu ranks 10th in program history with 4,304 career passing yards.
• RB Scottie Phillips ranks second in the SEC and sixth nationally in rushing touchdowns (nine) and eighth in the NCAA in total TDs (11) … Phillips’ 782 yards rushing is third in the conference.
• WR A.J. Brown ranks 10th nationally in the NCAA in receiving yards (805).
• Brown’s 2,469 career receiving yards rank third in program history.
• WR DaMarkus Lodge is fifth in the SEC in receiving yards with 550.

SOUTH CAROLINA HEAD COACH WILL MUSCHAMP
Will Muschamp (Georgia, 1994) is in his third season as the South Carolina head coach and is 4-3 in 2018. He owns a 19-14 record as the Gamecocks’ head man and a 47-35 mark in seven seasons as a college head coach overall. In his first season in Columbia, Muschamp guided the Gamecocks to a 6-7 mark and a spot in the Birmingham Bowl. The Gamecocks doubled their win total from the previous season while increasing their SEC wins from one to three. His second season brought more success, as the team won nine games for just the seventh time in school history, was the only Power 5 school to have a multiple win total increase in each of the last two seasons, finished second in the SEC East and earned a second-straight bowl appearance. Muschamp previously served as head coach at Florida where he posted a 28-21 record from 2011-14.

SOUTH CAROLINA SCOUTING REPORT
South Carolina is 4-3 overall and 3-3 in conference play entering this week’s game with Ole Miss. The Gamecocks are averaging 400 yards of total offense per game, with 236 coming through the air and 163 yards per game on the ground. Junior signal-caller Jake Bentley is completing 61.2 percent of his passes for 1,303 yards on the season, with 11 TDs and eight interceptions. Bentley has spread the ball around nicely with receivers Deebo Samuel and Bryan Edwards both hauling in 36 and 31 receptions respectively on the season. The duo has 10 of the Gamecocks’ 16 TD receptions this season. Junior Rico Dowdle leads South Carolina on the ground, averaging 70.1 yards rushing per game. Defensively, the Gamecocks are allowing just under 375 yards per game, giving up just 200 passing yards per game. Cornerback Rashad Fenton is tied for second in the SEC with three interceptions on the season. Linebacker T.J. Brunson leads the Gamecocks and is 13th in the SEC with seven tackles per game.

OLE MISS HONORS VETERANS WITH MILITARY APPRECIATION GAME
The Ole Miss vs. South Carolina game will honor the men and women who served and have served this great nation in military service Saturday with its annual Military Appreciation game. The Ole Miss athletics department has scheduled numerous military-themed events throughout the week, in conjunction with the University’s Veteran and Military Services, as part of Warrior Week. Military personnel were provided with free tickets for the football game, as well as the basketball doubleheader held Friday at The Pavilion. Student Veterans and ROTC members will serve as honorary captains, participate in the coin toss and lead the Rebels as they run onto the field, waving various military service flags. Military branch and POW flags will also fly around Vaught-Hemingway Stadium.

LITTLE EARNS MIDSEASON ALL-AMERICA ACCOLADES
OL Greg Little was named a Midseason All-American by four publications last week, as well as earning Midseason All-SEC second-team honors by Pro Football Focus. Little was named second-team All-American at the midway point by Sports Illustrated, USA Today, Associated Press and Athlon. Little has anchored the Ole Miss offensive line, appearing in every game at left tackle for the last three seasons. Heralded as one of the top NFL Draft prospects for 2019, Little earned six preseason All-America nods and is also on the Outland Trophy and Earl Campbell Tyler Rose Award watch lists. Little anchors an Ole Miss offensive line that ranks No. 5 in the nation in total offense and fourth in passing offense. The Allen, Texas, native has the third-highest pass blocking grade in the NCAA at 90.2. He’s allowed just four pressures in 311 passing attempts so far this season.

CHASING THE 300-YARD MARK
Quarterback Jordan Ta’amu has thrown for 300 or more yards six times this season, including surpassing the 300-yard mark in three straight contests. He’s just two games short of tying the program record of eight set by Chad Kelly in 2015. His nine career 300-yard games ranks fourth in program history and are just three short of the school record held by Kelly.

SCOTTIE TODDY
RB Scottie Phillips is quickly becoming a force to be reckoned with in the Ole Miss backfield. The junior college transfer is top three in the SEC and top 20 nationally in several rushing categories. Phillips ranks first in the SEC in total touchdowns (11) and second in rushing touchdowns (nine). His 782 rushing yards rank third in the conference and 23rd nationally. Phillips has recorded at least one rushing TD in six of the Rebels’ seven contests this season.

BROWN RAISES OVER 50K FOR ALS
When he was in seventh grade, Ole Miss punter Mac Brown had a modest goal of raising $500 for a childhood friend’s dad who had been diagnosed with ALS. Along with a group of neighborhood friends, Brown started a lemonade stand, Awesome Lemonade Stand, in Eden Prairie, Minnesota, to help his friend’s family. Seven years later, that $500 goal has ballooned to over $50,000 raised by Brown and his friends for ALS research. The Awesome Lemonade Stand is held on a late day in June and this year’s fundraiser raised more than $15,000 alone.

WHAT CAN BROWN DO FOR YOU?
Wide receiver A.J. Brown leads the Southeastern Conference in receiving yards (805) and receptions per game (7.5). The junior wideout from Starkville, Mississippi, has three 100-yard receiving games this season, including two straight. Brown is the only Ole Miss receiver in program history to record 60 or more receptions in back-to-back seasons. He currently ranks third in program history with 2,469 receiving yards, just 178 yards short of passing Shay Hodge for the top spot.

REMEMBER THE NAME
Despite the fact that he’s just made 13 career starts in a Rebel uniform, QB Jordan Ta’amu is quickly etching his name in the Ole Miss record books. In Ole Miss’ road win over Arkansas, Ta’amu completed 26-of-35 passes for 387 yards and two TDs through the air and 141 yards and one TD on the ground. The 141 rushing yards were the most fourth-most rushing yards by an Ole Miss quarterback and the most since 1979 (John Fourcade, 169). Ta’amu’s 528 total yards is the second-most in school history, only behind Archie Manning 540 total yards against Alabama in 1969. He now has five of the top 10 total offense single-game performances in program history, including four this season, the most ever by an Ole Miss player. Ta’amu currently ranks 10th all-time in career passing yards at Ole Miss with 4,304 yards.

TACKLIN’ FUEL
DT Mohamed Sanogo tallied a career-high 16 tackles in the Rebels’ last outing. The 16 tackles were the most by an Ole Miss defender in 11 years when Tony Fein tallied 16 total tackles vs. Auburn in 2007. It was the fourth time this season that Sanogo has led the Rebels in tackles. Sanogo ranks eighth in the SEC with 8.1 tackles per game.

GONE IN 60 SECONDS
The Ole Miss offense has nine scoring drives this season that has been under one minute, including seven drives of two plays or less. Those nine scoring drives under a minute have averaged just under 32 seconds and 67 yards per drive.

NEW MEMBERS OF nWo?
Ole Miss is well known for the explosive and dangerous members of its receiving corps, dubbed nWo (Nasty Wideouts), but Rebel tight ends Dawson Knox and Octavious Cooley had quite the performances of their own in the Rebels’ win over Arkansas earlier in the season. Knox and Cooley combined to for 150 yards and one touchdown in the Rebels’ 37-33 comeback victory in Little Rock. Coming into that game, the duo had combined for just five catches and 101 yards through the first half of the season prior to breaking out vs. the Razorbacks.

SWITCHING THINGS UP
Headed into the season, a majority of Ole Miss’ experience on the defensive side of the ball was in the secondary. Season-ending injuries to three Rebel defensive backs (Montrell Custis, Jaylon Jones, C.J. Moore) have forced Ole Miss to make several changes to its defense. Armani Linton and Tylan Knight, who have both seen time at running back in 2018, both switched to the defense prior to the Rebels’ game vs. ULM. Linton, who played DB for his first two years at Ole Miss, got his first career start at strong safety vs. Arkansas and has made nine total tackles since the switch.

REB ZONE
The Rebels lead the SEC and rank 10th in the country with a red zone scoring percentage of 93.9. The Rebels have converted 31-of-33 chances from inside the 20, including 20 TDs. Fourteen of the 20 Ole Miss red zone touchdowns have come on the ground.

124TH SEASON OF OLE MISS FOOTBALL
It’s the 124th season of football at Ole Miss and the second under head coach Matt Luke. The Rebels boast an all-time record of 671-520-35 (.562 winning percentage). Ole Miss did not field teams in 1897 due to an epidemic of yellow fever, and also in 1943 when football was abolished at all Mississippi state-supported institutions by the Board of Trustees.