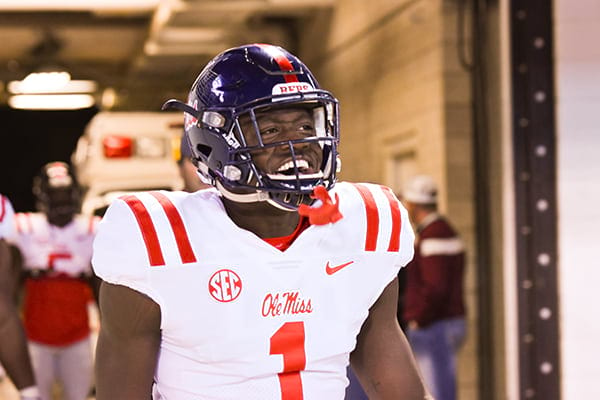 The C Spire Conerly Trophy, which goes to the most outstanding college football player in Mississippi, will be presented Nov. 28 at the Hilton Jackson.

Brown, a sophomore from Starkville, Mississippi, leads the SEC and ranks seventh nationally in receiving yards per game (98.6) and is tops in the SEC in touchdowns (10). Brown’s 1,085 receiving yards currently ranks third all-time in a single season for an Ole Miss receiver, just 68 yards behind 2015 Biletnikoff Award finalist Laquon Treadwell’s mark of 1,153 yards set in 2015.

Earlier in the year, the Starkville, Mississippi, native hauled in eight receptions for 233 yards and two scores vs. South Alabama, breaking Eddie Small’s Ole Miss record of 210 receiving yards set versus Vanderbilt in 1993. Brown’s total of 233 yards also tied Pharoh Cooper of South Carolina for the 13th most receiving yards in a game in SEC history. His two TD catches of 71 and 77 yards also marked the first time in school history a receiver posted two 70-plus yard touchdowns in the same game.

A panel of sports media select the winner after a six-day online fan vote conducted by C Spire at www.csopavoting.com. Fan voting begins Tuesday, Nov. 21 at 8:30 a.m. and continues through Sunday, Nov. 26 at 5 p.m. Fans can vote daily through Facebook, Twitter or text message

This year the C Spire Conerly Trophy will be presented at the Hilton Jackson in Jackson, Mississippi, on Tuesday, Nov. 28. A reception begins at 5:30 p.m. with the program beginning at 6:30. Tickets are available online at www.msfame.com or at the Hall of Fame offices. For a list of previous C Spire Conerly winners, visit www.msfame.com/events.