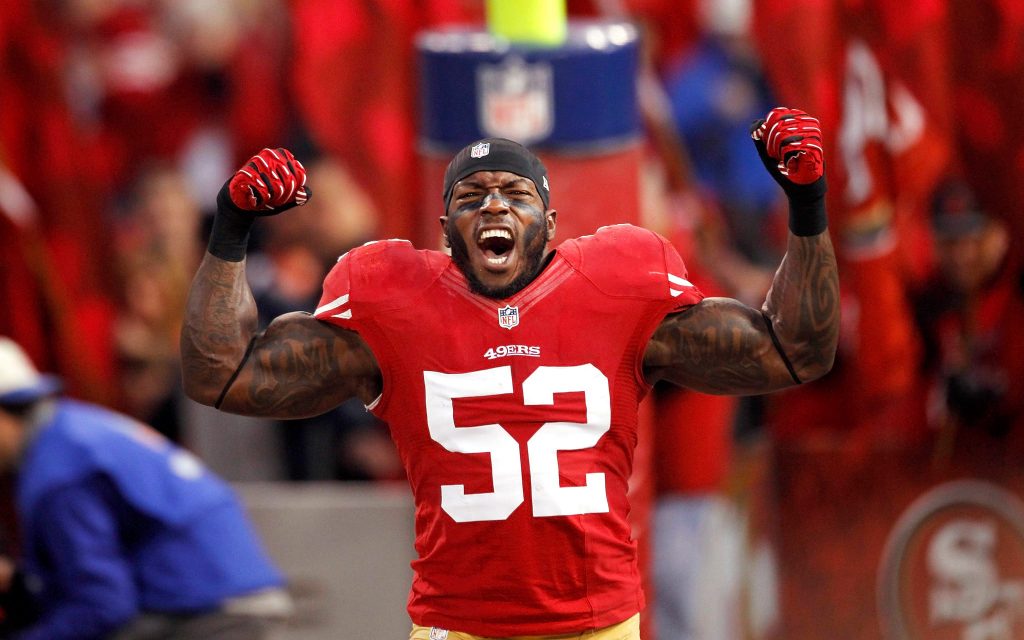 IRVING, Texas – Patrick Willis, who starred as an Ole Miss linebacker a decade ago, is among 75 former FBS standouts named Thursday to the 2018 College Football Hall of Fame ballot by the National Football Foundation (NFF) & College Hall of Fame.

Willis, the 11th overall selection of the 2007 NFL draft, is one of the most decorated defensive players in Ole Miss football history and was a consensus All-American in 2006 when he won the Butkus Award and Lambert Trophy as the nation’s best linebacker. He twice led the Southeastern Conference in tackles and was selected to the most first team All-American squads (13) ever by a Rebel player in a single season. A first team All-American in 2005 and 2006, he was also a two-time SEC Defensive Player of the Year.

After winning NFL Defensive Rookie of the Year in his 2007 debut season with the San Francisco 49ers, Willis went on to enjoy an eight-year NFL career in which he made seven Pro Bowls and was voted All-Pro five times. One of the best defensive players of his era, he finished with career totals of 950 combined tackles (732 solo, 218 assists), 20.5 sacks, 16 forced fumbles, five fumbles recovered, eight interceptions and two defensive TDs.

“It’s an enormous honor to just be on the ballot when you think that more than 5.19 million people have played college football and only 987 players have been inducted,” said NFF President & CEO Steve Hatchell. “The Hall’s requirement of being a first team All-American creates a much smaller pool of only 1,500 individuals who are even eligible. So being in today’s elite group means an individual is truly among the greatest to ever have played the game, and we are extremely proud to announce their names. We look forward to revealing the 2018 Class prior to the CFP National Championship in Atlanta, the esteemed home of the College Football Hall of Fame.”

Ole Miss has 11 representatives in the College Football Hall of Fame, including the most recent inductee Wesley Walls in 2014.

Ole Miss in the College Football Hall of Fame

* Kenna was inducted as an Army player; was on the 1941 Ole Miss freshman team with fellow hall of famers Conerly and Poole

This year’s ballot was emailed to the more than 12,000 NFF members and current Hall of Famers whose votes will be tabulated and submitted to the NFF’s Honors Courts, which will deliberate and select the class. The FBS Honors Court, chaired by NFF Board Member and College Football Hall of Famer Archie Griffin from Ohio State, and the Divisional Honors Court, chaired by former Marshall head coach, longtime athletics director and NFF Board Member Jack Lengyel, include an elite and geographically diverse pool of athletic administrators, Hall of Famers and members of the media.

“Having a ballot and a voice in the selection of the inductees is one of the most cherished NFF member benefits,” said NFF Chairman Archie Manning, a 1989 Hall of Fame inductee and Ole Miss legend. “There is no group more knowledgeable or passionate about college football than our membership, and the tradition of the ballot helps us engage them in the lofty responsibility of selecting those who have reached the pinnacle of achievement in our sport.”

The announcement of the 2018 Class will be made Monday, Jan. 8, 2018, in Atlanta. The city is serving as the host for the CFP National Championship, which will be played later that day at Mercedes-Benz Stadium. Some of the inductees will be on site during the announcement to represent the class and share their thoughts on being elected. The Jan. 8 announcement will be televised live, and specific viewing information will be available as the date draws near. A few inductees will also participate in the pregame festivities and the coin toss before the championship game.

“We cannot thank CFP Executive Director Bill Hancock and his staff enough for the opportunity to continue the tradition of announcing our Hall of Fame Class in conjunction with the National Championship,” said Hatchell. “Our presence at the title game has significantly raised the profile of the announcement, allowing us to shine a much brighter light on the accomplishments of our game’s greatest legends.”

The 2018 class will officially be inducted during the 61st NFF Annual Awards Dinner Dec. 4, 2018, at the New York Hilton Midtown. The inductees will be permanently enshrined at the College Football Hall of Fame in Atlanta later that December and honored on the field during the 14th Annual National Hall of Fame Salute during the Chick-fil-A Peach Bowl. They will also be honored at their respective schools at an NFF Hall of Fame On-Campus Salute, presented by Fidelity Investments, during the 2018 season.

The criteria for Hall of Fame consideration include:

*Players who do not comply with the 50-year rule may still be eligible for consideration by the Football Bowl Subdivision and Divisional Veterans Committees.

Once nominated for consideration, all player candidates are submitted to one of eight District Screening Committees, depending on their school’s geographic location, which conducts a vote to determine who will appear on the ballot and represent their respective districts. Each year, approximately 15 candidates, who are not selected for the Hall of Fame, will be named automatic holdovers and will bypass the district screening process and automatically appear on the ballot the following year. Additionally, the Veterans Committee may make recommendations to the Honors Court for exceptions that allow for the induction of players who played more than 50 years ago.

Of the 5.19 million individuals who have played college football since Princeton first battled Rutgers on Nov. 6, 1869, only 987 players, including the 2017 class, have earned induction into the College Football Hall of Fame, or less than two ten-thousandths (.0002) of one percent of those who have played the game during the past 149 years. From the coaching ranks, 214 individuals have achieved Hall of Fame distinction. Click here for a complete list of players and coaches in the Hall.