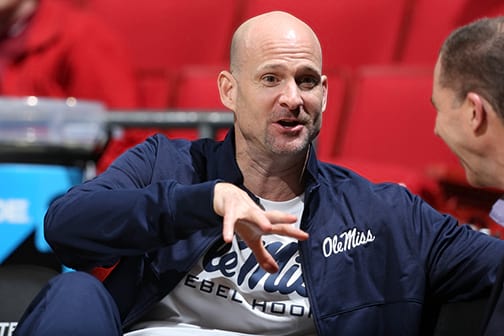 Deandre Burnett can’t quite place his finger on it. He’s not sure what exactly is leading to some of the lapses Ole Miss has had in close games this season, but he knows he and the Rebels need to fix it moving forward.

“I can’t really say,” Burnett said before practice on Monday. “We have got to come out with energy. I don’t think we have brought our own energy sometimes. We pride ourselves on focus and toughness, but not from the jump. We have to bring it from the beginning.”

Burnett and the Rebels are in the midst of a three-game losing streak that started with back-to-back overtime losses at home to South Dakota State and followed with a loss at Middle Tennessee to push Ole Miss’ record to 4-4 on the season.

Ole Miss isn’t getting blown out of games, and have undoubtedly had opportunities to win in each of its four losses. The Rebels led Middle Tennessee at halftime. They held a lead in the final two minutes against South Dakota State and led 37 of 45 minutes against Virginia Tech.

The team has shown flashes of what it would like to be, but those moments have come with lapses in between.

“Every game is a life in and of itself,” head coach Andy Kennedy said. “It is a combination of a number of different things. When you play against quality competition those things bite you. That is what has happened to us.”

It is the first time in Kennedy’s tenure that Ole Miss has lost three non-conference games in a row. And though he couldn’t revert back to previous seasons as experience for adverse stretches like this, the 13th-year head coach knows the sense of urgency from his guys needs to be elevated.

“I think that in-game adversity seems to bother us,” Kennedy said. “When you lose two heartbreakers at home, we have never lost back-to-back non-conference at home and never lost three in a row. When you go into a hostile environment against a quality team and you hit a little bit of adversity, we haven’t had the fortitude to push through it. Hopefully that will change quickly.”

He’s looking towards the veterans on this team to right the ship in that regard, guys like Burnett, Marcanvis Hymon and Markel Crawford.

“I think it is a lack of focus,” Hymon echoed. “Everyone is not engaged for 40 minutes. We come out with the right intentions, but we relax for a couple of minutes and they get us.”

It has shown at times. Ole Miss has had quality and efficient stretches during the course of every game, it just hasn’t been able to put it together for long enough to put away some of the tougher opponents it has faced in the early part of its schedule.

Kennedy said on Monday this team has learned a lot about itself in the last three games. He believes they have diagnosed some things they need to improve on as SEC play nears. First and foremost is the focus level he expects from his entire team and particularly the upperclassmen.

“Their urgency should be second only to mine,” Kennedy said. “I expect those guys to have a real understanding of every opportunity we don’t take advantage of is one less for them as the clock ticks on their careers.”

Other factors have contributed to the team’s recent struggles. Kennedy noted the decision making from his veteran backcourt has not been what it needs to be and that center Dominik Olejniczak has yet to find his footing.  Hymon went through struggles last year similar to those of Olejniczak. He’s trying to help the seven-foot transfer through what he believes is a temporary stretch.

“I talk to him a lot about mental state,” Hymon said. “That is what I went through, a lot of mental things last year and how you can get unfocused mentally. Things can happen and you get paralyzed while your season goes not how you want it. He will learn. He works hard and loves to listen. He will learn and be good for us.”

Olejniczak was out of basketball for over a year while transferring from Drake to Ole Miss. The speed of the game is something he is still adjusting to. Kennedy has seen the rim-protecting potential in his sophomore center, citing his defensive play in the first two games of the season.

“We have to get him back to being the presence that he is,” Kennedy said.

Ole Miss has played less than a third of its schedule. It is barely into the second week of December. There is still time. It has four straight home games in the next 10 days before Christmas. SEC play comes after that on New Year’s Eve.

“We know we have a long season,” Burnett said.” We are 4-4 with more than 20 games left. We have time, and we are still a very confident group.”

Kennedy said he is viewing these next four game as a “mini season” of sorts and hopes his group will be able to put together four complete games. Ole Miss needs a shot of confidence and the upcoming schedule provides an opportunity for that to happen.

“It is a long season,” Hymon said. “I have been through it all. We just have to get in here and work today.”

The Rebels return to The Pavilion to face Sam Houston State on Wednesday night. Tipoff is set for 7 p.m.