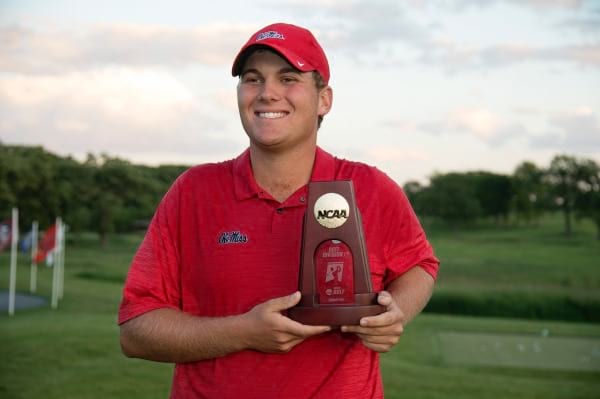 Sophomore Braden Thornberry fired a final round 1-under 71 to capture the NCAA Arnold Palmer Individual National Championship at the Rich Farms Harvest Golf Club Monday. Thornberry cruised to a four-shot victory over Arkansas’ Mason Overstreet with a four round total of 11-under par.

“It means a lot to be the champion,” Thornberry said. “It was a really special week. Really just from the start, got off to a great start, 6-under through the first 12 of the week, that got me started off on the right foot. The lead kept kind of creeping up. I tried to just stay in position until today and play a good round, and I was right there.”

“I think it validates everything that we’ve said since Coach (Kyle) Ellis and I got the job a few years back,” said Ole Miss head coach Chris Malloy. “All I heard was you couldn’t win a national championship at Ole Miss, and we’re going to go to this other school because we want to win national championships and we want to get on the Tour. He’s proven you can do that here.

“I think for Braden, the confidence piece is huge,” Malloy added. “What it does for him and the rest of his teammates, it will help boost those guys up to not only get the same trophy next year but get that team trophy, as well.

The Olive Branch, Mississippi native erased a three-shot deficit heading into the fourth-and-final round to win Ole Miss’ first golf national title. Texas’ Scottie Scheffler, who opened the day with a three-stroke advantage, stumbled out of the gate with a bogey and triple bogey to crack the door for Thornberry. The sophomore quickly seized control of the leaderboard with a birdie on the par-3 third and an eagle on at the 376-yard sixth to take a four-shot lead heading into the back nine.

Back-to-back pars on Nos. 16 and 17 and a birdie on the 18th clinched the national championship for Thornberry with a final total of 11 under 66-71-69-71—277. His opening round 66 tied the Rich Harvest Farms collegiate record and his four-shot victory was the largest since 2006. He joins a list of former NCAA individual champions including Ben Crenshaw, Luke Donald, Tom Kite, Justin Leonard, Phil Michelson, Jack Nicklaus and Tiger Woods.

“It’s cool knowing the past champions of this tournament, so to add your name to that obviously means a lot,” Thornberry said. “I’m just a huge fan of just going out there and having fun. I think a lot of people get too caught up in swings instead of just going out there and playing golf and having fun, so I try to keep that mindset. I try to remember that it’s still a game, and you’re just trying to have fun.”

“I think it’s going to open some doors,” said Malloy. “The funny thing about Ole Miss and our sell is once we get guys on campus and they see what we’re about, it’s a pretty easy sell. It’s just the first hurdle in getting them to campus and seeing what we’re about. All this coverage today, what Braden has done, the success this team has had this year, I think that’s going to help get some guys on campus, and I think after that it’s going to be pretty easy.”

The victory was Thornberry’s fifth of the season, which is the most in school history, and the seventh of his young career, which ties Dave Peege atop the Ole Miss record book.

Thornberry’s national title is the first in Ole Miss Golf history and the highest finish in the NCAA Championships for a Rebel, besting Darren Cole’s fifth-place finish in 1985. It marks the 20th individual NCAA title in school history along with two in men’s tennis and 17 in track and field.