The Recipe for SEC Greatness 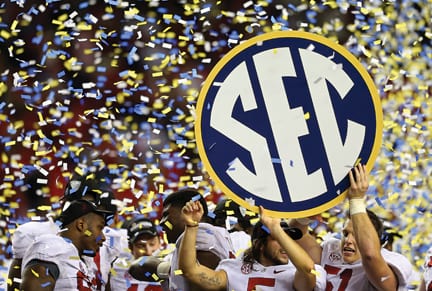 What is a top tier SEC program? Who are the top tier programs? How can you define it? More importantly for Ole Miss, there’s the question of how – if at all – one can become a “top half” program.

For years, if pressed to name the “top half” of the once 12-team SEC, rational fans would spout out what historical data supports: Florida, Alabama, Tennessee, Georgia, LSU and Auburn.

Three schools per division, with all six holding every one of the conference’s national titles since the BCS was created before the 1998 season (of the six, only UGA is missing a crystal football).

Nowadays – and at critical moments in recent years – that list of six might look different depending on the year. But for hard, statistical proof, we counted up every single SEC record from 1992 (the year of expansion to 12 teams and the creation of the East and West Divisions) through the 2012 season, using an old-fashioned calculator and notepad. Here’s the evidence:

A few quick notes:
Only conference games were counted. With the vast difference in quality of opponent between schools’ non-conference schedules, including those games would muddy up our math.

The list doesn’t include the W/L totals for SEC newcomers Texas A&M (6-2) and Missouri (2-6), for reasons of perspective. However, wins and losses against these teams in 2012 do count towards the total above.

Probation and vacated wins were ignored. This is a cheating league, and retroactive changes mean about as much as the math on an Alabama t-shirt.

What stands out? After that top six, the bottom six can be defined by three sets of pairs – the Class of   ’92 entrants South Carolina and Arkansas, Ole Miss and MSU (separated by a measly half game!) and basement dwellers Kentucky and Vanderbilt.

But these “top six” are the SEC programs that define not only the conference but college football. They’re perennial national title contenders, bowl teams (good bowls, mind you) and recruiting titans. With the push to 14 teams and thanks to two rather opposite freshmen seasons, you could tentatively add Texas A&M to that top pile and Missouri to that bottom one.
But no matter how you judge it – empirically, emotionally, numerically, religiously – Ole Miss is not among this level of conference “elite.”

In simple terms, a plan on how to reverse this fortune and join the upper-level of the SEC involves an increase in everything – really, everything: ticket sales, stadium size, state population, university enrollment, state education test scores, merchandise sales, marketing buys in out-of-state TV markets, you name it.

And that’s not to mention the obtuse measurement of plain old hope, because every other program in the conference is fast at work either maintaining their dominance in these categories or trying to build past those currently above them.
But let’s look at that simple set of standings. It’s agreeable, but it’s deceptive. And good news for Ole Miss: It’s possible to jump and be jumped.

1. You need the right coach
Certainly the SEC is home to storied programs that provide perennial winners, but nothing lasts forever, and anyone can be awful for three or four years.

Now, let’s take the remaining 13 seasons, from 2000 through last year, and rank them. Why divide them between 1999 and 2000? Because that’s when a certain coach from Michigan State arrived:

Notice anything, like, say, Nick Saban? Saban’s influence on LSU is stunning, and marks the most notable ascension of any SEC program in the modern era. The Tigers’ winning percentage from Saban’s arrival until today is .721, or as it’s known around Baton Rogue, “The New Golden Age.”

Pre-Saban, the Tigers were only a half-game better than Ole Miss through eight years. Afterwards? They’re one of the most powerful programs in the nation. Through his ability to unite the talent-rich state of Louisiana in recruiting and rally for massive facility overhauls to ability to coach up players and strategize in key moments of big games, Nick Saban alone is a program-maker. Just ask Alabama.

2. You can win in either division, but an easier one helps
It takes really bad teams to make really great ones. Notice that Florida and the Volunteers were the only schools to win 50 or more SEC games (and two national titles) in the 1990s timeframe. One reason? The fact that their SEC East neighbors Vandy, Kentucky and South Carolina coughed up 141 conference losses combined.

Therefore, the SEC West – not the SEC – created the league’s famous parity. Save for Georgia at No. 5, the entire SEC West ranks below the Vols and Gators, yet above the rest of the East. In half of these seasons, the West was represented by a team with two or more losses in the title game.

When the SEC West – namely LSU, Auburn and Alabama – rose to greater power than Florida and Tennessee in the 2000’s, it wasn’t by picking off one quality division opponent but rather grinding out a survival strategy in the brutal West, where, as the standings above illustrate, the worst is still better than most of the East.

What can be done about this? Not much, but it’s worth noting that the two 2013 newcomers both hailed from the western side of the country. If there was ever a push for a more geographically inclined divisional structure, you can bet the Rebels would prefer Missouri over any number of eastern leaning schools (Alabama, Auburn). 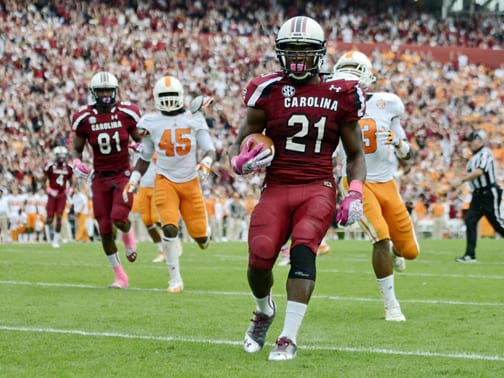 3. Some team has to get worse for you to get better
Ask a friend at a tailgate in 2013 for their top SEC teams, and they’d likely pick South Carolina instead of Tennessee. It’s the most notable swap between the top and bottom since the ’92 expansion.

In the 7-team SEC West, Ole Miss should narrow its focus. Call this the Carolina approach. For most of their early time as SEC members, the Gamecocks were dangerously skidding towards levels of Kentucky and Vanderbilt irrelevance. Steve Spurrier helped push through that glass ceiling thanks to Lou Holtz (both are great examples of our No. 1 point).

Spurrier is 35-29 at South Carolina. That’s not a remarkable number, but it’s come just as former titan Tennessee has fallen on its hardest times. In the last three seasons, South Carolina has 17 SEC wins and a division title. In the same time frame under Derek Dooley, the Vols have five.

How does this translate for the Rebels? Auburn and Arkansas, quite frankly – both are programs above Ole Miss, both have suffered different but entirely similar structural failures in the last year, and the Rebels built a 7-win 2012 season by beating both.

Simply put, Ole Miss can’t advance unless one of these stumbling former successes stays down on the mat, or recuperates on a bended knee long enough for the Rebels to build up some momentum.

When it comes to recruiting, consistency is as important as ratings.

Remember the experiment that was Ed Orgeron’s recruiting classes and Houston Nutt’s coaching? It caught fire for about three fourths of a single season, and then steadily declined.

Ask a Rebel fan at the moment why they feel confident about the Hugh Freeze era and they’ll tell you it’s his highly touted 2013 Signing Class, because Freeze can bring talent that could play for any SEC school to Oxford.

That’s half the answer. Going back to South Carolina, you’ll find nothing as impressive as Freeze’s 2013 class in Spurrier’s first two seasons in Columbia. But after landing the No. 6 ranked class nationally (per Rivals) in 2007, the Gamecocks began to build through consistency.

In fact, South Carolina didn’t break nine wins until 2010, when that ‘07 class was in its senior season. That year USC won the Eastern Division for the first time with recruiting classes ranked (chronologically) 6th, 22nd, 12th and 24th on the field.

It’s important to note this because it’s highly unlikely Freeze can pull a 2013-sized coup every single Signing Day. Frankly, he doesn’t have to for the Rebels to be competitive.

The bigger picture here is that it’s less about the number you earn in February and more about the consistency of the system – that the same staff bringing in class after class establishes quality depth and that no large scale attrition occurs thanks to a transitioning coaching staff or a wholesale scheme change.

The ‘Cocks are 31-9 overall in the last three seasons, and entering 2013 Carolina is a favorite to win their division. Keep in mind, that’s a team primarily made up of classes ranked 24th, 18th, 19th and 16th.

4. Mascots do matter, especially ones that sell
A 2012 ranking by the Collegiate Licensing ranked the top schools in the country by official merchandise sold. Compare this ranking to the W/L standings, and you’ll notice a trend:
1. Texas
2. Alabama
3. Kentucky
4. Florida
5. Michigan
6. LSU
7. North Carolina
8. Georgia
9. Notre Dame
10. Oklahoma

Four of the aforementioned “top half” SEC football schools show up here, plus Kentucky (who along with North Carolina make the list almost purely for basketball reasons).

It pays to have merchandise in the market, both literally and theoretically. It’s not just as simple as the old idea of “Free Advertising” because college sports fans are far more passionate and detailed about their loyalties. Apparel – be it bumper stickers or sweatshirts – is sported by living, breathing brand ambassadors.

That’s why the long-running battle of Colonel Rebel does in fact hurt Ole Miss Athletics. Regardless of your side in the debate, not having a marketable logo that’s accepted in every culture and marketplace prevents branding and exposure, which in turn lessens revenue.

5. YOU matter most: Why volume is fuel for great programs
Ole Miss has one of the smallest athletic budgets in the SEC, depending on the year ($42.9 million in reported revenue in the 2011’-12 academic year. The SEC leader, Alabama, reported $124.1 million in the same time-frame).

The same bleak news goes for attendance. Ole Miss averaged 57,066 at home games in 2012, ahead of only Mississippi State, Kentucky and Vanderbilt. Even newcomer Missouri, often stigmatized as being in a region of the country not as passionate about football, averaged over 10,000 more fans a home game during a lousy 5-7 year.

Because of the complexities that go into maintaining a successful college sports program, there’s a variety of must-haves in vastly different areas. However, the sole unifying factor in the breakdown of any consistently good or great SEC football program is unwavering fan loyalty.

That means it’s up to each Ole Miss fan to do as much as possible:

• Attend as many home athletic events, especially football games, as you can. When you go, buy your tickets through official university channels.
• Buy officially licensed apparel and accessories. Wear it. As much as possible. Ubiquity is the key, especially when it comes to impressing teenage recruits.

6. Recruit. Whoa, hang on, let’s clarify: recruit FANS. Bodies in seats means money in coffers. Find anyone in the South (it’s rare, but Yankees migrate everyday) who isn’t dedicated to a particular team and send them to the Grove Support academics. Giving money to athletics is sorely needed to compete with Alabama, but academics make alumni, not football games. Alumni give more on average than fans with no official university connections.

Don’t waiver. Coaches notice. Recruits notice. When those Gamecocks went 0-16 in the SEC in 1998-’99, they sold out every home game. When Nick Saban lobbied for better athletic facilities to compete to recruit nationally, he had the support of 90k-plus in Tiger Stadium behind him.

Nothing is impossible. There are major games and BCS bids won in Boise, Idaho. South Carolina was an ACC reject for two decades and could very well win a national title in football soon.