The Right Choice for Evan Engram

Evan Engram announced his presence when he twisted his upper body to make a catch over the middle at Vanderbilt three years ago.

There were many in the Ole Miss signing class of 2013 that didn’t need to announce their presence. Their reputations arrived ahead of them, guys like Robert Nkemdiche, Laquon Treadwell, and Laremy Tunsil.

Engram was a three-star signee from Powder Springs, Georgia, attracting attention from the service academics, the MAC and some FCS schools, but there was scant notice from SEC schools or other FBS programs.

He attracted much more attention in camp at Ole Miss.

Engram played off the bench in that Vanderbilt game, but he played a lot finishing with five catches for 61 yards.

Ole Miss would eventually win that game on the strength of a lengthy late touchdown run by Jeff Scott.

Engram’s contributions in his college debut were significant, but the biggest thing he did was to begin building a relationship of trust with Ole Miss coach Hugh Freeze.

The trust from Freeze continues, but the trust with quarterback Chad Kelly is stronger than ever, and that’s allowing Engram to finish his college career with a bang. He currently has more catches and receiving yards than any other tight end in the nation.
However, the trust with Kelly didn’t happen overnight.

Engram had a slow start to 2015 when both players were juniors. Treadwell was Kelly’s primary target, and Engram two catches over the first two games, just ten over the first five.

Kelly has spread the ball around to a number of players this season. If any of his targets has approached the Treadwell role, it’s been, Engram.

The comfort level between the two is a product of off-season work.

“Chad is a big confidence guy. He likes to believe in his guys. He wants to trust his receivers, and that’s what we worked on a lot as a corp as an offense this off-season. So I think it has really grown confidence-wise and just showing that we make big plays,” Engram said. “We’ll make a big play in practice, big plays in camp plays that we like for him to call and he feels comfortable putting the ball out there for us to go get it. That all comes with repetition, and that comes with confidence.”


Engram averaged 16 yards a catch and 95.8 yards a game through five games.

He’s been more than that tight end that drags across the field just beyond the line of scrimmage. He’s getting open down-field and making plays.

Though he had a slow start to his junior season, he finished with 38 catches, second on the team, for 464 yards and two scores.

This season has mirrored Engram’s sophomore campaign when Bo Wallace consistently found him with a match-up advantage on deep routes.

Engram had 38 catches then, but his 17.4 yards per catch led the nation’s tight ends.

“I definitely see more action downfield. The chemistry’s really good with Chad,” Engram said. “I just go out there, and if my name is called to make a big play, I try to do that. That’s a big part of  being a leader for the team, leading by example.” – EVAN ENGRAM

Getting open to make big plays is a team effort.

“We all know him, and we’ve seen him. It’s the play of those other guys. Damore’ea Stringfellow, Quincy Adeboyejo, DaMarkus Lodge. What are you going to do? The only way you can bracket him is to put a backer and a safety inside out, but that means somebody is one-on-one,” Freeze said.

Of course, the run game plays a part in helping free Engram too.

The once-deep running back position has been devastated with unexpected losses.

Redshirt freshman Eric Swinney, for whom big things were expected, was lost to a torn ACL in the season opener against Florida State.

Before that Jordan Wilkins, a junior who was running with strength and power at the end of 2015, was lost to an administrative error within his academics.

Akeem Judd and Eugene Brazley had shouldered most of the load, both rushing for more than 100 yards in the Rebels’ 48-28 win over Memphis.

Freshman D’Vaughn Pennamon has made strides as well, though Pennamon sat out that game with an injury.
Lots of players right now are playing a part in Engram’s opportunities.

“The run game helps, and of course give Evan credit, he’s really talented, but if you didn’t have other people …” Freeze said. “If you have better people around you, on the other side of the field or inside, you’re going to get a lot more chances to get open.”
That’s what Freeze is selling in recruiting, for prospects to come and be a part of a big group.

The next stretch-the-field tight end may already be on the roster. Maybe it’s Octavious Cooley. Maybe it’s Jacob Mathis.
Cooley is the heavier of the two. Mathis, who is red-shirting this season, has a body type more similar to Engram’s.


At 6-foot-3, 235 Engram has added weight to his frame through the years. He’s worked to become a better blocker and takes pride in that part of his game. The fact is, Engram’s role in the offense is more pass-catcher than a blocker.

It’s the receiving skills that make Engram special; that gave him a choice to make at the end of last season.

He and Kelly both could have opted early for the NFL draft.

“Towards the end of last season, we had our talks about what this year could be like and what could happen. It’s definitely what we see now,” Engram said. “It’s really been just work. After we decided we were coming back, it’s all been about work from then to the start of the season.”

Engram was encouraged to return to school by the NFL Advisory Committee, and now scouts have told Freeze that Engram has definitely helped his potential draft stock by coming back. No doubt Kelly has too.

NFLDraftScout.com currently ranks Engram the third-best of 105 available tight ends in the Class of 17.

CBSSports.com says Engram has “elite short-area quickness” and his quickness off the line of scrimmage and agile feet allow him to gain separation out of his breaks and make defenders miss.

Engram may not be a first-round guy like the Big 3 underclassman departures who joined him as Ole Miss freshmen in 2013, but he’s expected to be gone in the early rounds.

He may be a tight end in name, but many in the NFL project him as a big slot receiver. Engram, in that role, could easily create match-up issues for defenders used to covering smaller guys on the interior of the field.

Receiving is what he’s done most of his college career, and he’s done it better than any other Ole Miss tight end as Engram will approach 150 career catches and 2,000 yards if he remains healthy this season.

All from a guy who was overlooked by his home state school, Georgia, in the recruiting process and needed big plays to announce his presence to Ole Miss fans.

This year a deeper bond with his quarterback and an increased role in the offense are helping him play some of the best football of his career.

“I definitely see more action down-field. The chemistry’s really good with Chad,” Engram said. “I just go out there, and if my name is called to make a big play, I try to do that. That’s a big part of being a leader for the team, leading by example.” – RN

This is just small sample of the types of feature stories you’ll find in every issue of Rebel Nation Magazine™. The January/February 2017 issue is now available. Subscribe online at rebelnationmagazine.com and have every issue delivered straight to your home or office. A perfect addition to your home and family. 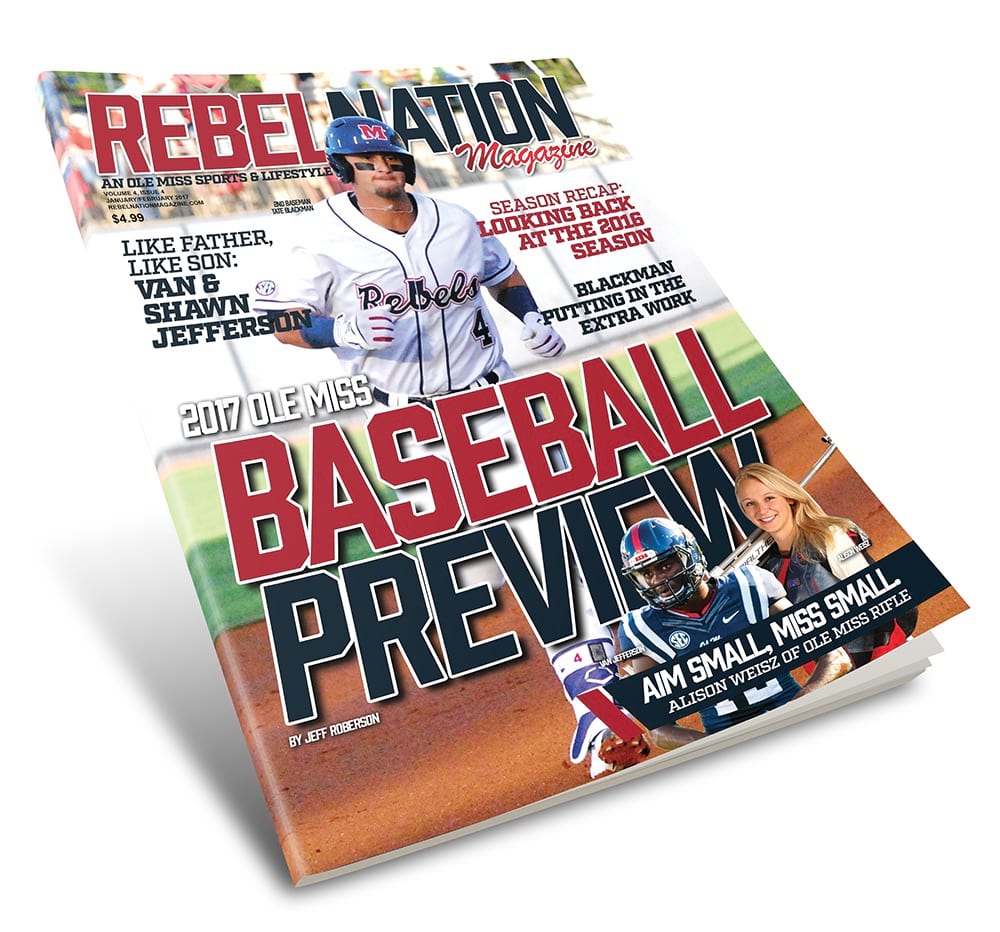