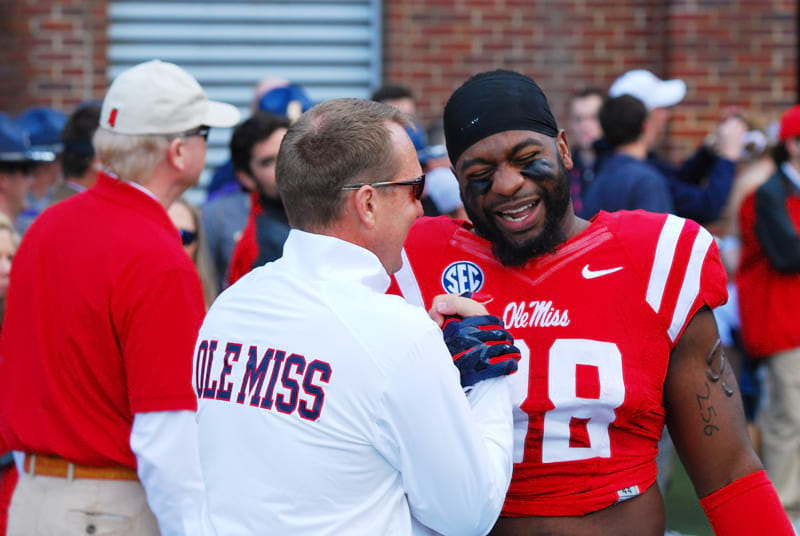 It would be easy to paint a mental picture of a slow walk, gentle descent from the top of the whirlpool bath, settling carefully to the bottom and soaking in the warmth and reviving tired muscles.

In truth, there’s some of that with D.T. Shackelford.

As pictures are worth a thousand words, however, the image Shackelford hopes to leave for Ole Miss fans – after receiving a sixth season of eligibility from the NCAA – is one of relentless pursuit and big strikes from the middle linebacker position he was recruited to play.

After two knee surgeries and two years away from the game a little bit of the first picture is inevitable, especially on mornings after the wear and tear of a college football game.

“I have a little soreness,” he admits. “A little extra time in the training room never hurts.”
It’s a small price to pay for Shackelford as he savors every play of a career many thought would never resume.

In April 2011 he pounded the indoor practice field turf with his fists knowing the pain he felt in his knee was no minor injury.

He’d suffered no season-ending injury previously in his football career, but football players know. The body doesn’t lie. There were tests to run and results to find, but Shackelford knew.

Surgery that same spring would follow, and when rehab wasn’t working there was more surgery in the winter. 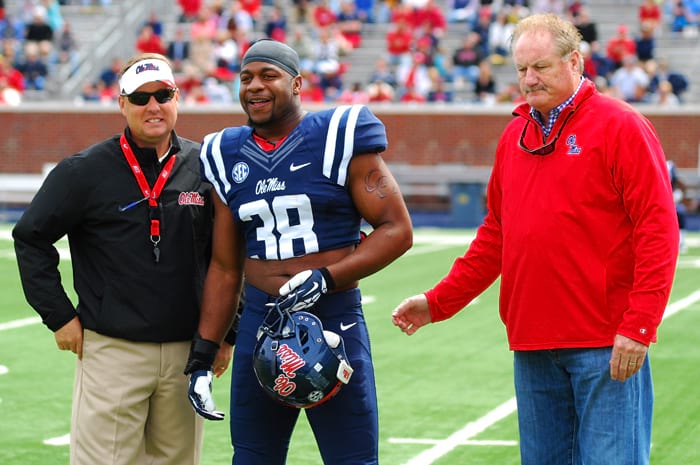 Through it all Shackelford has turned 24 years old. He’s begun to go by his birth name, Deterrian, though most people around him still call him “D.T.”

He’s pursuing a second master’s degree with hopes of one day becoming a superintendent of schools.

And he continues to pursue opposing ball-carriers.

“At the end of last year he really got more confidence in his knee. I know he did from my standpoint. Maybe he was faster with that than I was,” defensive coordinator Dave Wommack said.

There we plenty of opportunities to quit along the way, especially for a guy who had achieved academically as Shackelford already had.

He’d already had two seasons of college football in the bank as well. It wasn’t like he hadn’t achieved on the field.

He had a promising start to his college career with 20 tackles in 11 games and an interception returned for a touchdown. He was named to the SEC’s all-freshman team as a linebacker in 2009.

He played some defensive end as a sophomore finishing with nine tackles for loss and five sacks, as Houston Nutt was trying to rebuild the talent base that helped the Rebels win back-to-back Cotton Bowls.

Big things were expected for Shackelford in 2011 before the knee gave out in spring practice.

Players often follow a routine schedule – routine but long – and return to perform at high levels after an ACL tear. That schedule doesn’t budget surgery two times. Shackelford had to budget it twice and kept pushing.

“It’s just my drive. I’ve never had a quit-type attitude,” he said. “When people look up to you, they see a certain way in which you present yourself. I want to be that guy.”

He couldn’t walk away and still be that guy.

While Shackelford was cleared to play for the 2013 season it took a while for him to earn his way back into a significant role.

When injuries reshuffled the lineup Shackelford got his only two starts of 2013 in the season’s final games – against Mississippi State and Georgia Tech – and responded with 12 tackles, 3 1-2 tackles for loss, a sack and three pressures over the two games.

He played with an explosiveness that caught his coaches’ eyes.

“I felt like I was fast the whole season, but I got an opportunity,” Shackelford said. “Some things happened on defense. Its football. Sometimes people get injured. I was able to come in and be a boost for the defense.”

Shackelford played in each game last year and had 44 tackles with 7 1-2 tackles for loss and two sacks.

His end-of-season play earned him a chance to replace Mike Marry at middle linebacker.

He held off a spring-time challenge from Christian Russell, a new signee who was rated the No. 1 junior college linebacker in the nation by Scout and ESPN.

As days fly off the calendar in his final season Shackelford finds himself firmly entrenched at middle linebacker.

With 15 tackles and a sack through three games he’s showing the production he did as a much younger player, the one who was rated among the top 20 linebackers in the country by Rivals.com and ESPN coming out of Decatur, Ala.’s Austin High School.

Coaches believe big things will come from Russell and freshman DeMarquis Gates, but the light hasn’t come on for those guys yet. 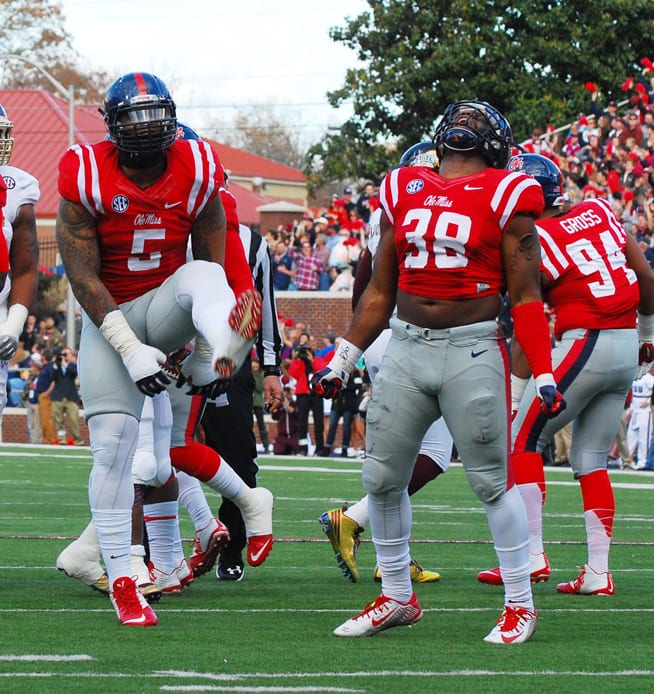 Ole Miss coach Hugh Freeze was a little uncertain of where Shackelford would fit in 2013, but that wasn’t the case this season.

“He’s definitely healthier this go-round than he has been. He still has a little hitch in his giddy-up so to speak,” Freeze said. “We have our fingers crossed that he has a healthy, successful year.”

So far Shackelford has been those things and has been very consistent too. He had five tackles on opening night against Boise State and six more against Louisiana-Lafayette in Week 3.

Even while he wasn’t playing Shackelford was a constant positive vibe for the Rebels.
He’s a two-time winner of the school’s Chucky Mullins Award which goes to a player who exemplifies courage and emotional strength as well as athletic success.

In 2013 Shackelford was a National Football Foundation scholar-athlete semifinalist and was nominated a second time for the Wuerffel Trophy which honors community service along with academic and athletic achievement.

He’s participated in numerous community endeavors and mission trips, and recently was one of 22 college football players named to the Good Works Team chosen by All-State Insurance and the American Football Coaches Association.

“He’s very mature and one of the leaders in our locker room,” Freeze said. “He’s a great model of the student-athlete.”

That leadership has come into play as Shackelford has spoken with new teammates about how to handle success and stay on track for team goals.

He’s determined to help the Rebels better handle a fast start to the season than they did a year ago when they were unbeaten and coming off an impressive blowout win at Texas.
The Rebels followed a 3-0 start with three-straight losses.

So even if the hot tub means a little more to D.T. Shackelford than it does the rest of the Rebels, that’s OK. He can withstand the good-natured ribbing.

Shackelford is comfortable with younger teammates and confident in his role on and off the field to help a rising program take another step in the ultra-competitive SEC.

He could have walked away – hobbled perhaps on a bad knee – but he’s glad he didn’t.
“I’m a firm believer in Jesus Christ. Whatever happened to me was His plan,” he said. “I feel great, and I feel like this team can do great things.” – RR

THIS IS JUST A SAMPLE OF THE TYPES OF STORIES YOU’LL READ IN EVERY ISSU REBEL RAGS MAGAZINE™. DON’T MISS AN ISSUE!!!! CLICK HERE TO SUBSCRIBE TODAY! March/April issue coming soon!