Coach Derrick Nix Is A Survivor 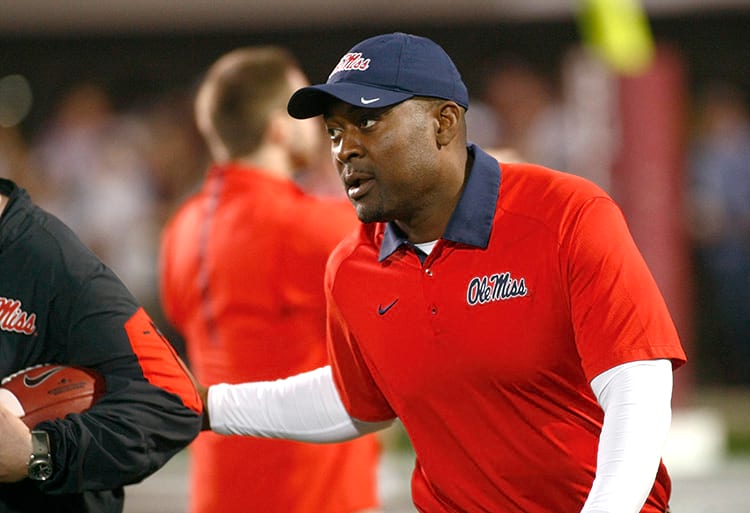 With the help of his brother, Coach Derrick Nix is still in the Game

Nix, now the running backs coach at Ole Miss heading into his ninth season in Oxford, spent his college years at Southern Mississippi,

“I would say he was kind of a man’s man. He was old school in a lot of things. He demanded your best on and off the field. He wanted you to display great character,” Nix said. “That’s one of the reasons I was able to get hired as fast as I was, not because I knew anything more than any of the other candidates, just that he knew what he was getting.”

Nix was a freshman All-American in 1998 and helped lead the Golden Eagles to a conference championship in 1999 where Southern Miss finished number 13 in the country, the best ranking in school history.

The Golden Eagles would play in bowl games every year Nix played in Hattiesburg, a feat that he takes extreme pride in, but the Alabama native didn’t know what was next. Nobody did. Nobody expected he’d have kidney failure that would cost him a chance to play NFL football. Nobody.

In 2000 Nix played a game against the University of Memphis, a team he dominated throughout his college career. He sprained his ankle and tried to come back quickly.

During that process, his uninjured ankle started swelling. He gained weight out of nowhere, and eventually, tests showed that he was losing protein out of a kidney. They thought it was treatable.
Nix was 20. He wasn’t interested in the diagnosis. He thought he was just overeating. He was 20. He was invincible. 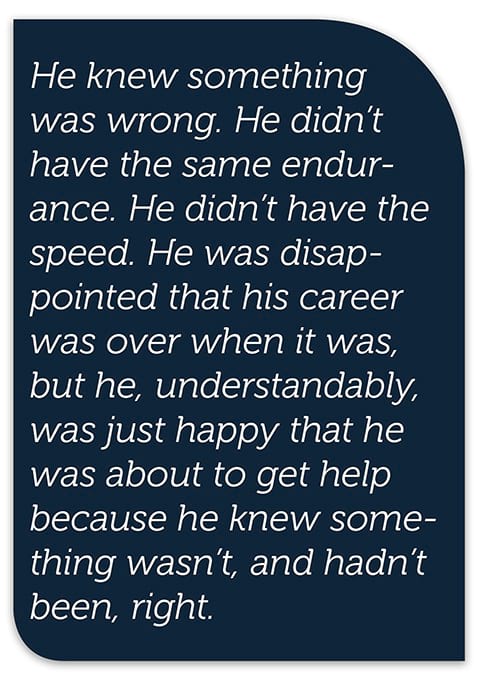 Nix redshirted his junior season in 2001 to handle all the medical issues that arose. He played in 2002, and he performed well enough to get invites to the senior bowl and the NFL combine.
He remembers having 104 yards vs. East Carolina in his last game. He then remembers being on dialysis a week later with kidney problems.

“The next spring everybody was going to the draft. I wasn’t doing anything but going to class and dialysis. Everything changed. From a potential first round to third round pick to dialysis every other day.”

Nix had a match for a kidney. He had signed up and gone through the process of finding someone that would match him. He found him in his household, his brother Marcus. Nix felt brand new again.
Nix is now an organ donor because he realized the importance of it and how much he relies on it.

“I became that after I had realized how dependent I am on it,” Nix said. “I just had a child born three months ago. When you think about your health, you want to be around to see them grow up. It just hit me that when I was going through this that if something did happen to me and I’m not able to live the life I plan on living then I want to help somebody else.”

“As Coach Nix said, organ donation is very important. Especially to the families that are waiting for an organ transplant. It has a huge impact on these people’s lives. It improves their lives. It saves their lives,” President of the Mississippi Organ Recovery Agency Kevin Stump said.

To become an organ donor, a person would need to go to donatelifems.org and register through the computer access port.

Ole Miss had just come off a 2007 season where they had won zero conference games and had to relieve Ed Orgeron of his duties.

When Nix took the job in January of 2008, he remembers the staff was scrambling to put a semblance of a recruiting class together. Nix remembered one guy in particular that wasn’t being heavily recruited, but that he knew would be, and frankly had to be, a focal point of the Ole Miss class that year.

“I remember looking at film of Brandon Bolden. We’re talking about a three-star guy that didn’t have a lot of offers, but I couldn’t believe he was still available,” Nix said. “His size-speed ratio was good and was something that I thought he could have success on our level with. “

The Rebels eventually garnered Bolden’s signature, and the Louisiana native rushed for over 500 yards during his first year as a Rebel. Nix also signed the number one prep-school running back in the country in the 2008 class in Enrique Davis.

“I felt like I was on top of the world. I had just started my coaching career four years ago and all of a sudden I’m getting one of the top running backs in the country, and I feel like I’m getting a steal in Brandon Bolden. “

During Nutt’s first two seasons in Oxford, Ole Miss enjoyed two of the better years the program had seen in modern history. 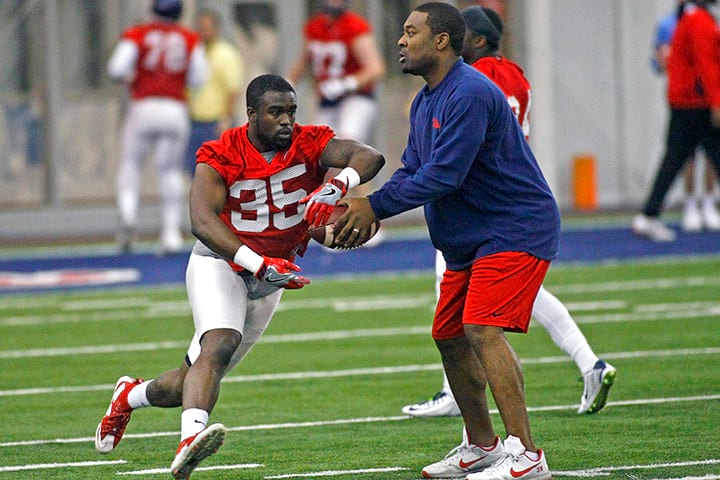 In the 2008 season, the Rebels surprised everyone knocking off Florida and LSU on the road on the way to their first bowl appearance in five seasons.

“We felt like we had good players, but we didn’t know how to win. Guys had not chased success yet. We had that win in the Swamp. Those guys played as hard as they could. That gave us some confidence for the rest of the year where we played in the big-time game in the Cotton Bowl.”
Nix was allowed to enjoy the pleasure of coaching with his brother Tyrone, Ole Miss’ defensive coordinator under Houston Nutt when he came to Oxford.

“That was a great time. It was something that rarely happens in this profession,” Nix said. “I owe a lot to Coach Nutt for him to do that. It was funny because he had his brother on the staff too with Danny Nutt. All of a sudden I wasn’t Coach Nix anymore. I was coach D-Nix.”

While Ole Miss had some success during the 2009 season, the Rebels didn’t live up to the preseason hype that they had placed on their shoulders. Everything came crashing down on a Thursday night in Columbia, South Carolina where the fourth-ranked Rebels fell 16-10

Then it went badly, quickly. Ole Miss won six games in total during the 2010-2011 seasons, and only won one conference game during that period. Nutt had to go. Ole Miss had to move in another direction, or their program would be left behind in a conference that getting left behind isn’t an option.

Ole Miss hired Hugh Freeze in December of 2011, replacing Nutt. Freeze took his time with his assistant coaching hires, but eventually decided to retain Nix to be a part of attempting to turn Ole Miss’ football program around.

“I knew that there was some young talent here, but I knew things had to change,” Nix said of the situation when Freeze took over. “Coach Freeze came in with a brand new attitude, and he really held their feet to the fire to a different standard. We didn’t know if we could win a game or not. We knew the time we were going to put in. We knew how hard we were going to work. We knew we had some kids that were tired of losing. We signed some guys that fit our new mentality here, but we didn’t know.”

Nix said that the 2012 season became a confidence thing, with Ole Miss getting back to their first bowl game in four years. Bowl games have become the norm under Freeze, as he’s taken the Rebels to a bowl game consecutively for four years now.

“I remember beating Auburn for our first conference win in years and beating Arkansas, and we just started to believe,” Nix said “That’s catapulted now to the recruiting we’ve done. The whole attitude now has just changed. We have guys that fit our character that we have in this program. Guys here want to do something great.”

Ole Miss is different now. The Rebels are signing highly ranked recruiting classes. They’re winning football games at a level that the program hasn’t seen since John Vaught was roaming the sidelines. Things aren’t, and likely never will be, the same at Ole Miss as before with Freeze on the sidelines.
“I think the mental approach is so different. When Coach Freeze came in here, he knew we had a lot of great things to sell, and that’s all we had to do. We just had to sell the positives about Ole Miss,” Nix said.

“We’re a family here no matter what the scoreboard says,” Nix said. “That’s why we have a job, but that’s not what defines us as a program.”

Ole Miss lost Jaylen Walton after the 2015 season. Walton served as a stable back for the program, and even considering his size disadvantage, the Memphis native was able to give Ole Miss solid production at the position.

This year, the Rebels return junior Jordan Wilkins and senior Akeem Judd to the mix, along with adding redshirt freshman Eric Swinney who is coming off a stress fracture injury he acquired in his first summer in Oxford.

“I’m excited about getting to work with him. Jaylen did a lot when he was here with catching the ball out of the backfield and helping with special teams,” Nix said. “But I think for the first time since 2009 when we had Enrique and Brandon and Cordera Eason that we have three guys that are 200 plus backs. We’ve got that combination of size and speed that’s ideal for that position. “

Nix is going into his ninth season at Ole Miss. Most coaches at the Division-1 level don’t stay at a place that long, whether it’s for a promotion, a firing, or other circumstances. Nix is different. He considers Oxford home now. After so long here he said he had to.

“It feels like home. In this profession you’d never think you’d be in one spot this long just because of the nature of our business,” Nix said. “We’ve been coming back to this place since ‘08. My wife and I were talking about how I’ve been here in Oxford just as long as I was in Hattiesburg as a player and a coach. It’s become home to us. We enjoy it. We love it. It’s been very good to us.” – RN

Don’t miss an issue of Rebel Nation Magazine™. The September/October 2016 issue is now available. Subscribe online at rebelnationmagazine.com or pick up a copy at a store near you. Click here to find a store location in your area.