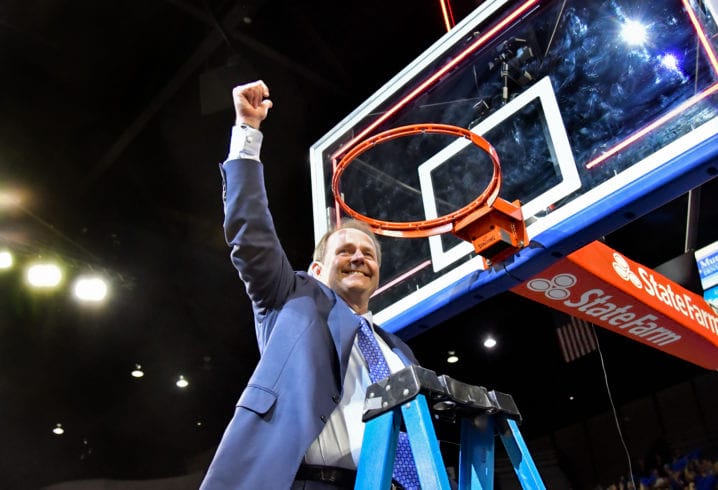 OXFORD, Miss. – After leading Middle Tennessee to conference championships and NCAA Tournament runs, Kermit Davis is returning to his home state as the 22nd head coach of the Ole Miss basketball program, as announced Thursday by Vice Chancellor for Intercollegiate Athletics Ross Bjork.

Davis will be publicly introduced Monday, March 19 at 5:30 p.m. CT at The Pavilion at Ole Miss. Complimentary t-shirts and food will available to fans who attend. Doors will open at 5 p.m. for the event, and there will be open parking in the garage.

“After assessing the entire landscape of college basketball and speaking to basketball experts across the country to determine the greatest fit for Ole Miss Basketball, the answer was clear – Kermit Davis is the best coach and best leader to take our program to the next level in the SEC and NCAA,” Bjork said. “Combining his brand of play and his proven ability to build a model basketball program, Coach Davis has established himself as a leader and winner in college basketball. Over the last several weeks, we consistently heard that other coaches `never want to play his team,’ and his record confirms that. Coach Davis also possesses a great sense of purpose for his program and does it the right way off the court. During the process, Coach Davis’ energy, drive, and vision for our program was unmatched, and we can’t wait to welcome him and his family back to the great state of Mississippi and into the Ole Miss family.”

An eight-time conference coach of the year, Davis is 34th among active Division I head coaches with 403 career wins, including stints at Middle Tennessee, Idaho and Texas A&M. He ranks 10th nationally in winning percentage over the last three years and 13th over the last seven.

With a 25-7 record this season, Middle Tennessee reached the 24-win mark for the sixth time in the last seven seasons, which in turn led to six postseason appearances. While shattering attendance records, he coached 25 all-conference players and five players of the year in Murfreesboro and signed five top-25 recruiting classes, including the No. 11 class in 2004.