The Start of the Journey: Year One Under Hugh Freeze 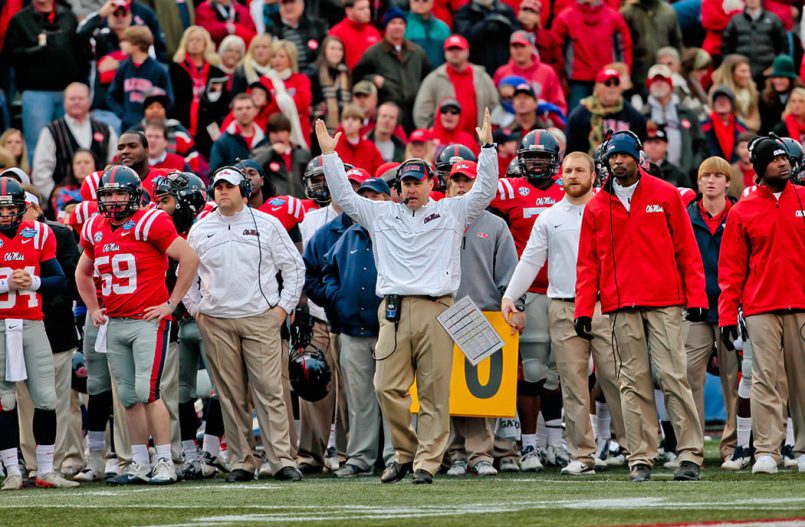 Nobody at Ole Miss expected the 2016 football team to go 5-7. Everyone thought that they’d build off a Sugar Bowl win, and likely end up in a bowl game somewhere in Florida. That was the thought. That was the mindset.

That didn’t happen. The Rebels went 5-7 and weren’t competitive with Vanderbilt and Mississippi State to end the season. The program is as low as it has ever been under Hugh Freeze, but the program as a whole is better off than it has been in an inordinate amount of time.

The 2011 season at its best was a disaster, and at its worst was an abomination. Ole Miss won two games that year, and they were lucky. Fresno State had Ole Miss on the ropes, and Southern Illinois took the Rebels into the fourth quarter. Alabama ran Ole Miss off their own field, and LSU took knees with six minutes left so to not score again.

“That year was so hard,” former Ole Miss defensive end C.J. Johnson said. “Some of us thought about transferring, but Coach (Houston) Nutt told us to give the new guy a chance. We did, and we all liked Coach Freeze and decided to stay.”

They fired Houston Nutt and paid him six million dollars to go away, and then they hired the first-year head coach from Arkansas State, Hugh Freeze.

Freeze’s hire had criticism, sure. He had only coached at the FBS level for one year, and the only other head coaching position he had been offered, supposedly, was Memphis.

“We didn’t know what we were looking at when Coach Freeze came to town,” Ole Miss running backs coach Derrick Nix said. “We knew that we had some young talent, but we weren’t sure if we knew how to win yet.”

Then Texas came to town, and so did somewhere around 1 million more people.  Ole Miss was promptly run off the football field quickly and immediately. They lost by 35 that night, and it wasn’t that close. Ole Miss fans, at that point, needed a reminder of where the program was, and they got it cloudy.

After beating Tulane and falling in a hard-fought game at Alabama, they came home to play eventual Heisman-trophy winner Johny Manziel. They had Manziel, and the Aggies beat until they didn’t. They blew it. They gave up a 98-yard touchdown drive, and Bo Wallace threw a costly interception. They lost, but for the first time in a while, Ole Miss fans had a reason to believe. The past few years when they had lost, the game was over by the third quarter. It wasn’t this time. They were in it.

They snapped that SEC losing streak the next week when Auburn came to town. Jeff Scott had an acrobatic touchdown run, and Mike Marry intercepted an Auburn pass to put the game away. The losing streak that had lingered over that program for years was gone. They weren’t back, but for that day and that moment, it felt like they were.

“That Auburn game just changed the mindset of everyone on the team,” Johnson said. “We knew that we were good enough but when we got that first win, it was just a relief, and it was like the pressure had jumped off our shoulders, and that now we could go out and win more.”

They went to Arkansas the next week, who wasn’t good but was likely better than Ole Miss. It didn’t matter. Ole Miss wanted it more, and even after they blew a second-half lead, Bo Wallace engineered one of the better drives of his career, and the Rebels knocked home a game-winning field goal to give them a second consecutive win in the SEC and put them one game away from bowl eligibility.

Ole Miss was sloppy early, turning the football over three times in the first half. They were tied at 17 going into the locker room for halftime. They found their footing in the second half and ran Mississippi State back to Starkville as they won 41-24. Ole Miss was going bowling, and it was a program that needed that more than anything.

They played Pittsburgh in the BBVA Compas Bowl in Birmingham. It was the most meaningless bowl game of the SEC slate, but for Rebel fans, it was manna from Heaven. Ole Miss took 40,000 fans to Birmingham that day to see the Rebels knock off Pittsburgh. They wanted to see the reward that the kids that weren’t supposed to win many games reaped because they did win games, they won far more than most people expected.

Ole Miss parlayed that success into the best signing class that the school had ever seen, a class that likely wasn’t going to happen if the Rebels didn’t show marked improvement during the 2012 football season. They did just that. They not only showed improvement, they not only played hard, but they also won, and they won at a level that not many expected them to.

Ole Miss has had better years since, and likely will have better years in the future than they had in 2012, but that team and that success brought upon the change to a culture of the program that will likely be felt for years to come.