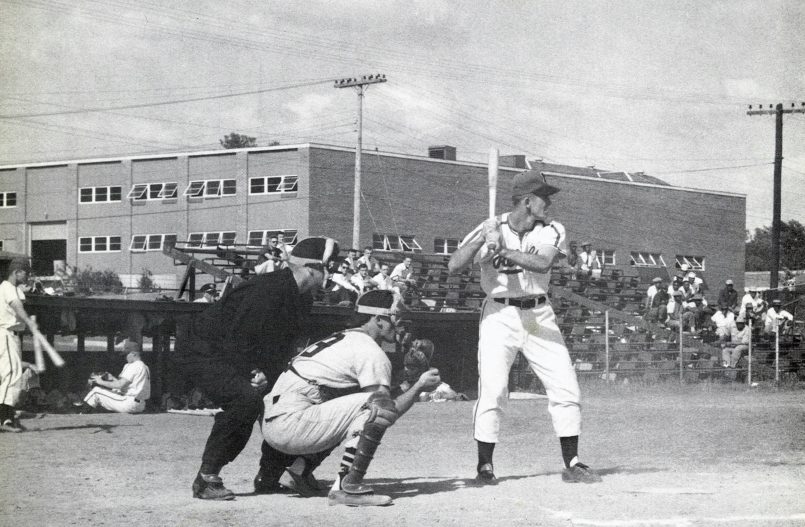 Each one bled red and blue. The Ole Miss family lost two prominent members this summer as Edward (Eddie) S. Crawford III and Larry Grantham both passed away. Crawford was the school’s last three-sport letterman and had worked at Ole Miss for 54 years. Grantham used his football talents to parlay a professional career replete with a Super Bowl ring with the New York Jets.

Grantham – a gritty linebacker – played for Coach Johnny Vaught from 1957 through 1959 and played on the Ole Miss baseball team in 1958.

Crawford, a Jackson, Tennessee native, spent nearly six decades in Oxford. From 1954-1956, Crawford participated in football, basketball, and baseball for three seasons and was on the track team for one.

“Eddie Crawford has given more than he received,” said University of Mississippi Chancellor Emeritus Robert Khayat. “As an unofficial ambassador for Ole Miss for more than 60 years, he served our university in virtually every capacity. He and his beloved wife, Shirley, were always friends of students, representatives of the university at weddings, funerals and social events and at state and national sports events.”

Known as the “Rebel Clipper,” Crawford – a left halfback, lead Coach John Vaught’s Rebels to back-to-back Southeastern Conference titles in 1954 and 1955. He also had a three-year career rushing average of 6.4 yards per carry and averaged 31.0 yards per kickoff return – remains a school record.

A two-way player, he also played a vital role in the Rebels leading the SEC in total defense in 1954 and 1956. He still holds places in the record books as he ranks in a tie for third among Ole Miss single-game scoring leaders with his 24-point performance against LSU in 1956. He scored once rushing, twice on pass receptions and once on an interception. Little did he know at the time, Crawford’s four-TD performance in Baton Rouge would turn out to be a life-changing event.

Crawford had worked tirelessly pursuing the heart of a certain Ole Miss head cheerleader, Shirley Wagner, who had brushed him off. But once his four TDs hit the record book, Wagner agreed to a first date. When they were finally married, it was a love affair which lasted 60 years.

Crawford was involved in numerous big plays on both sides of the ball during his Ole Miss career, but none bigger than his interception against TCU in the final minutes of the 1956 Cotton Bowl, which sealed the 14-13 win over the No. 5 ranked and Southwest Conference Champion Horned Frogs.

Crawford was most proud serving as a husband, father, Pap and lovingly known as “Coach” by many. He is survived by his wife of 60 years, the former Shirley Wagner of Grenada, Mississippi, and two children, Kim (Brett) Sidelmann of Van Alstyne, Texas, and Kip (Whitney) Crawford of Oxford as well as two grandsons, Slater and Logan. 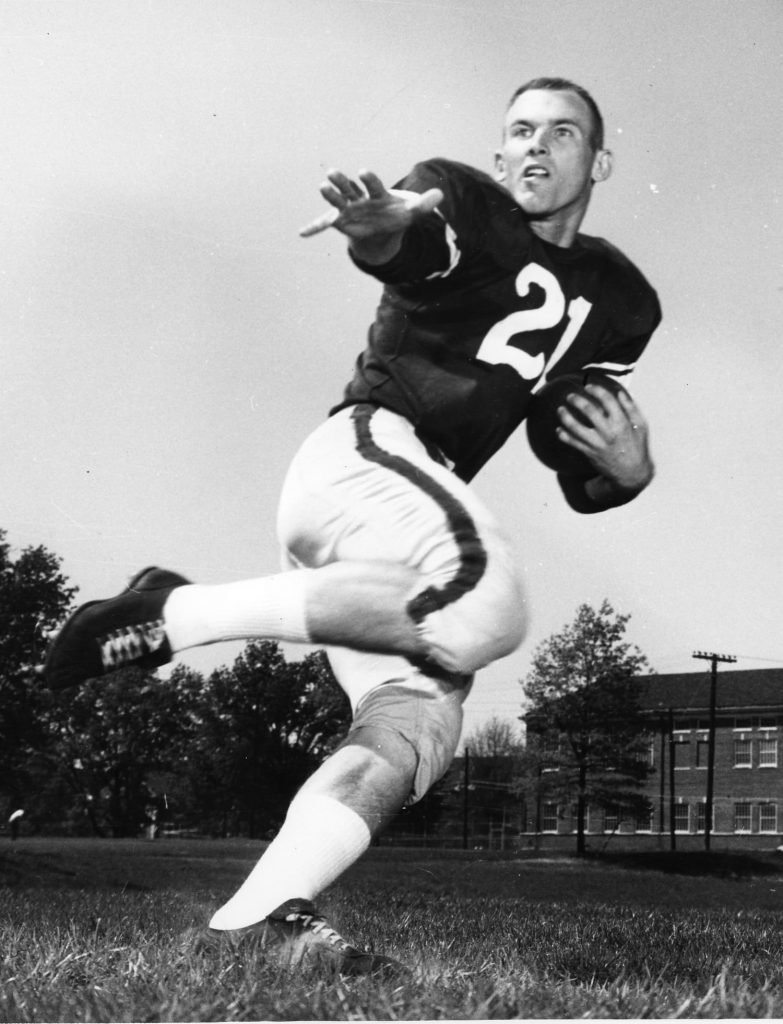 After serving five years as associate director of the Foundation, Crawford was elevated to the position of director. Crawford joined the athletics department in June of 1962 as the head basketball coach, freshman football assistant coach, and varsity scout. He was head basketball coach from 1962-63 to 1967-68, posting a 4697 record. His football duties included coaching the offensive backfield and receivers before taking on full-time recruiting responsibilities in 1977. Following the 1979 season, Crawford joined the Foundation.

Crawford’s influence was spread out beyond the field and court. Former Colonel Rebel mascot, Barry Kruger, and his wife, former cheerleader Judy (Spear), were impacted by Crawford.

“A great man,” Kruger said. “He was one of the men during our time at Ole Miss that was kind to Judy and me and steered us towards success. Proud to know this family and we grieve with you but celebrate his life.”

Langston Rogers, former Ole Miss Sports Information Director, worked with Crawford for decades. The three-sport star on the field was an All-Star off the field and behind the scenes.

“During his 54 years serving Ole Miss, Eddie Crawford, without a doubt, helped more people than anybody I’ve known during my time at the University,” Rogers said. “Alumni and friends of Ole Miss knew they could depend on Eddie for results when they had questions concerning things like game tickets, parking, fund-raising, recruiting contacts and general athletics policies. Eddie and Shirley Crawford must have held the record when it came to attending Ole Miss family weddings and funerals. He also made certain that the Ole Miss Athletics Foundation sent flowers to families who had lost loved ones. Ole Miss lost one of its greatest with the passing of Eddie Crawford. He is truly missed.”

As a member of the Rebel basketball team, he started at forward for Coach B.L. “Country” Graham. He practiced late at night after football practices and in the spring had to focus on football first before baseball where he was an All-SEC center fielder in 1956 when he led the SEC in home runs. The diamond Rebels won the SEC West and NCAA District III titles and made it to the College World Series. Participating in so many sports at such a high level was a difficult task for Crawford.

“It was the hardest thing I had to do,” Crawford recalled for a Clarion-Ledger story which appeared just before his induction into the Mississippi Sports Hall of Fame. Although he enjoyed participating in other sports, football always remained his priority.

His baseball skills nearly landed him a professional contract via the St. Louis Cardinals, but he decided to become a Rebel instead.

“I was in the dugout in a Cardinals uniform (as a high school player) and between innings would throw in the outfield in place of Stan Musial,” he said. Crawford declined the opportunity to sign with St. Louis to enroll at Ole Miss on a football scholarship. The Brooklyn Dodgers also tried to sign him before his senior season at Ole Miss, but he came back to Oxford.

He was drafted by the NFL’s New York Giants and was a first-string defensive back and offensive flanker but a shoulder injury cut short his pro career. He then coached high school football in MS and TN before coming back to Ole Miss.

Before enrolling as a freshman at Ole Miss, Crawford earned All-Tennessee honors as an end in football and a center in basketball while playing at Jackson (Tenn.) High School. He earned four letters in football, four in basketball and two in baseball during his prep career and served as captain of the 1952 Jackson High baseball team. Crawford also played in the 1952 All-America high school football game in Memphis, Tennessee.

Grantham passed away on June 17 at the age of 78. He was a member of the famed 1959 Rebel gridiron team that earned a share of the National Championship with a 10-1 record.

The 1959 team, which finished 10-1 and earned a share of the national championship, is considered one of the best in Ole Miss football history. The defense shut out eight opponents that year, and Grantham was a key to its success. The only blemish that season was the infamous Billy Cannon punt return TD on Halloween night that gave the Tigers a 7-3 win. In the post-season, Grantham shadowed Cannon in the rematch in the Sugar Bowl and trounced the Tigers, 21-0. Cannon had eight rushing yards. Grantham not only helped shut down Cannon but caught an 18-yard TD in the game.

Grantham was drafted in 1960 by the New York Titans/Jets of the American Football League and the Baltimore Colts of the National Football League. He chose to sign with the Titans and quickly established himself as one of the keys to a Jets defense that made the playoffs in 1968 and 1969, winning the AFL Championship in 1968 and then defeating the Baltimore Colts, 16-7, in Super Bowl III. He was credited with three tackles, and two pass defenses in the win over the Colts, a game which Jets quarterback Joe Namath had guaranteed a New York victory.

“Rest in peace Larry Grantham, you were one of the greats,” Namath posted on Facebook when he learned of Grantham’s passing.

Grantham helped take the upstart AFL team from worst to first over nine years. In today’s NFL, his 6-foot frame with only 210 pounds would barely be a safety, but Grantham was named an AFL All-Star five times in his 13-year career (1960-1972.) He was inducted into the New York Jets Ring of Honor in 2011.

Grantham played in 175 AFL/NFL career games, and his defensive totals included 43 individual takeaways – still a franchise record. He recovered two fumbles for TDs. Grantham played one last season in 1974 for the Florida Blazers of the World Football League.

After his pro career, Grantham spent time broadcasting Jets games on the radio and was involved in business and banking. He remained close to the Ole Miss family and served as a sideline reporter on the Ole Miss radio football network (1980-82).

Rogers noted, “Ole Miss has been blessed to have had many outstanding athletes, and Larry Grantham stands near the top of that list. Larry’s former Ole Miss and New York Jets teammates often speak of his toughness, especially for a player considered undersized for a linebacker. Larry Grantham cared about people, and it showed. Larry organized a golf tournament and got his Super Bowl III teammates to participate, which has now raised more than $1.5 million for Freedom House, an alcohol-treatment center in Glen Gardner, New Jersey.”

Born September 16, 1938, in Crystal Springs, Grantham earned two letters in football, two in basketball and three in baseball while playing at Crystal Springs High School. He was captain of the 1955 football squad, gaining all-star mention.