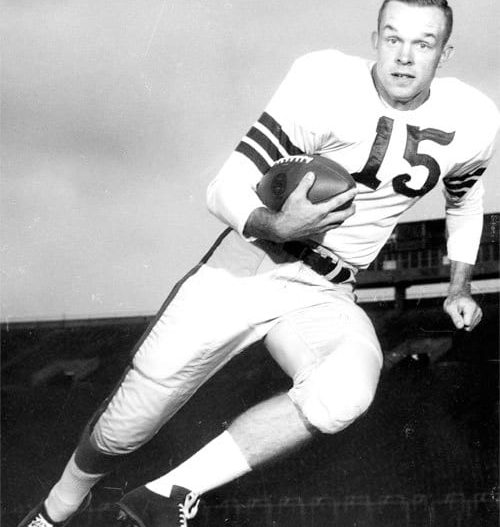 OXFORD, Miss. – Ole Miss lost one of its greatest athletes Christmas Day with the unexpected passing of Raymond Lloyd (Ray) Brown, 81, of Pascagoula and Gautier, Mississippi.

Born July 7, 1936, in Clarksdale, Mississippi, Brown’s death came a week prior to his induction as a Charter Member of the Sugar Bowl Hall of Fame.  Brown was to have been in New Orleans next Monday for the ceremony where he would have joined another Rebel, Archie Manning, in the Class of 2018.

Brown, who had already been selected to the All-Time Sugar Bowl team (1955-62), was inducted into Ole Miss Ath­letic Hall of Fame in 1988 and the Mississippi Sports Hall of Fame in 2005.

A strong-running, triple-threat player, Brown earned three letters (1955-56-57) for legendary Coach John Vaught’s Rebels and helped lead Ole Miss to the 1955 Southeastern Conference Championship and a three-year record of 26-5-1, including a 14-13 victory over TCU in the 1956 Cotton Bowl and a 39-7 win over Texas in the 1958 Sugar Bowl. He was selected first-team All-SEC by United Press International in 1957, while also being a second-team All-SEC pick of The Associated Press and International News Service.

Brown’s play against Texas in the 1958 Sugar Bowl is considered by many to have been the greatest all-around performance in Sugar Bowl history when he rushed for a first-quarter touchdown, passed for a second-quarter score and also was outstanding on defense with a Sugar Bowl-record three pass interceptions. Against the Longhorns, Brown led the Rebels with 157 yards rushing on 15 carries and also completed three of eight passes for another 58 yards.  His three pass interceptions still remains an Ole Miss single-game record shared by eight Rebels.

However, his most memorable moment came late in the contest when he dropped back to punt from his own end zone. Under heavy pressure and facing a possibility of having his effort blocked, Brown raced down the sideline 103 yards for a touchdown, a play which was officially 92 yards and still the longest in Sugar Bowl history.

When the ballots were counted for the 1958 Sugar Bowl Outstanding Player, Brown was the unanimous choice, the first-ever in Sugar Bowl history.

His 92-yard run against Texas still ranks second in the Ole Miss record book for longest rush from scrimmage, having held the school record until 997 when John Avery had a 97-yard rush against Arkansas.

Including his 1958 Sugar Bowl game against Texas, Brown accounted for 1,998 career yards, averaging 5.98 yards per play, was responsible for 30 career touchdowns (17 rushing TDs, 12 TD passes, 1 TD pass interception return), 10 pass interceptions for 139 yards and one TD and 16 punt returns for 122 yards, an average of 7.6 yards per punt return. He also averaged 36.5 yards on 64 career punts (2,333 yards) and his senior season saw 12 punts carry 50-plus yards from the line of scrimmage.

Brown also lettered as a third baseman in baseball at Ole Miss, playing for another Ole Miss legend, Tom Swayze, and was a member of the 1956 NCAA District III champions, which advanced to the College World Series where the Rebels defeated New Hampshire and Bradley before losing to Minnesota and Arizona.

Following his Ole Miss career Brown participa­ted in the 1958 Chicago All-Star Game and the Senior Bowl. After earning his B.B.A. degree from Ole Miss, he was selected in the fifth round (50th overall pick) of the 1958 National Football League Draft by the Baltimore Colts.

He played defensive back, quarterback, punter and kick-holder three years (1958-59-60) with the Colts and was a member of Baltimore’s NFL Championship teams of 1958 and 1959.

In 1958, he was the only rookie starting for either team in the NFL Championship Game as Baltimore defeated the New York Giants, 23-17 in overtime, in what has been called one of the greatest NFL games ever played. Brown was joined on the field that day by two Ole Miss greats playing for the Giants, quarterback Charlie Conerly and defensive back Jimmy Patton.

Brown played safety in 36 NFL games and had 13 pass interceptions for 238 yards. He also had 95 career punts, averaging 39.3 yards per punt, recovered one fumble, completed eight of 19 passes for 78 yards and one TD, and had 20 yards rushing on five carries.

As a prep star at Greenville High School, Brown won the Big Eight Conference’s Outstanding Player Award in 1953, the season he led Greenville to the conference championship. He was a two-time high school All-America and All-State selection, while also being captain of his high school football team. He earned 11 high school letters as he notched Wigwam Wiseman All-America and Scholastic honors and a first-team All-Southern pick.  Brown earned All-Big Eight Conference honors in four different sports.

Brown was active and a leader in the community and in his profession.  He was a member of the First United Methodist Church in Pascagoula, where he served as Chairman of the Board of Trustees, among other positions.