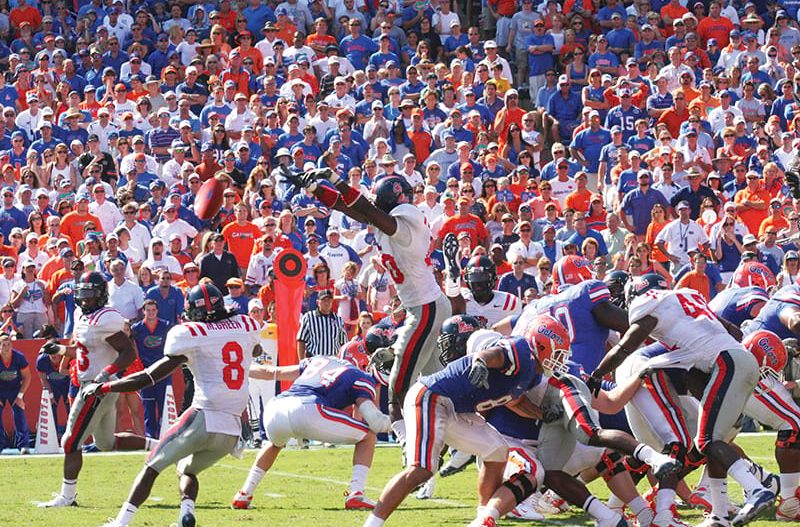 Ben Hill Griffin Stadium can be one of the most intimidating football stadiums in the country on a hot Saturday afternoon. Thousands upon thousands of screaming fans doing a primitive version of an alligator rapidly closing its jaws. The intimidation factor grows tenfold when the Florida Gators are playing their best football of the year. They hosted the Rebels while ranked 4th the nation.

However, according to Ole Miss Rebel great Kentrell Lockett, he remembers the stadium going deathly quiet. “It got so quiet at that point. So, so quiet. It was almost like you could hear street lights changing.” He vividly remembers that moment because he was the cause of the silence.

Kentrell Lockett has had a lot of good things happen in his life, but wherever he goes people want to know about one thing, the blocked extra point. By his wry laugh and excited tone of his voice, I can tell he doesn’t mind re-telling the story.

Before the story of the blocked kick, he recalls the Tim Tebow press conference after the game. “I remember the speech,” he says. Then he starts, “Gator Nation, I vow to be the hardest working quarterback the Gators have ever seen. I will be the first one at practice…I had the speech just about memorized back then.”

For those who are unaware of the moment, here is the simple version. The Rebels were trying to hold on to a 31-24 lead with just over three minutes remaining. However, former Gator Percy Harvin scored on a 15-yard run to make it 31-30. They were one extra point away from tying the game. This is where Lockett comes in. He says, “Justin Smith blew the guard up, and he made it that much easier for me to slip through there.”

Lockett slipped in and got his hands on the extra point. That’s when the silence fell. All that can be heard was the contingent of Rebel fans and Lockett yelling while running off the field with his helmet in the air.

That kind of excitement and intensity is what Kentrell Lockett brought to the field every Saturday. The Hahnville, La. native remains a fan favorite with the Ole Miss faithful. Plus, he keeps himself wrapped in the Rebels happenings. He spends some of his time with Ben Garrett doing the “Talk of Champions” podcast.

Lockett is the perfect microcosm of the recent history of the Ole Miss football program. He was coached by both Coaches Ed Orgeron and Houston Nutt. He also reminded me of his connection to Hugh Freeze. “I experience Hugh Freeze, too. Coach Freeze was an assistant under Coach O,” he stated.

Through that swing of coaches, he experienced the lows of Coach O’s seasons. He also felt the ups of back-to-back Cotton Bowls and the sickening feeling of a 2-10 season during the Houston Nutt regime. He also survived the two completely different coaching styles of those two men.

When talking about Orgeron, Lockett said, “Coach O is always at the pinnacle when it comes to football intensity. He’s always at 1000%,” Lockett pointed out. He gives Orgeron credit for improving his game. “I give credit to Coach O for a lot of things that make me the man I am today.”

Lockett enjoyed his years with Coach O, but the lack of winning took its toll. As much as they enjoy the spirit of Orgeron, losing is all that matters. It is definitely all that matters to the University. O was out.

In marched Houston Nutt. Lockett said he was different. He quotes Nutt from the first team meeting, “Men, we’re going to have fun. You know how you define fun? W. I. N. It had been so bad for us that it couldn’t get any worse. It was only up from there. Just like a train going to the top,” Lockett stated.

Back to back Cotton Bowl wins led Rebel Nation to believe that the good times were going to last. However, the next season was a 4-8 year. Then the 2011 debacle of a 2-10 season happened, and people were looking for someone else to blame.

“After the 4-8 season people were looking to point fingers, looking for a black sheep to blame it on,” Lockett said. “I spoke out about things that other players were afraid to. If I’m the captain and you have this issue, I’m going to say it. They say I was a troublemaker. But I wasn’t trying to cause trouble. I was just calling them out on some things that I thought wasn’t right and what other players said was wrong.”

“But when we were in the 2-10 season, Coach Nutt ordered a drug test every Monday morning. So, whoever failed, that’s who he blamed it on that we were losing. Even if the person wasn’t playing.” Lockett goes even deeper. “He was looking for something actually to say; besides the lack of coaching, the lack of not being in tune to Ole Miss and not wanting to man the ship of the Rebels no more he was looking for a scapegoat.”

Kentrell Lockett rode the wave of Ole Miss football. He suffered an ACL injury in 2010 that hampered a potential professional career. However, that has not stopped him in his desire to continue to be active in the Rebel family. “I’ve got a lot of stuff, man. It’s just about pulling the trigger and executing.” He adds, “Because I don’t like to fail, I don’t like to lose, I don’t like to be embarrassed. So, until I know I can put 1000% toward what I’m doing, I’m not going to do it.”

It’s that kind of attitude that made him a great player. I can’t wait to see what he does with his new wave. – RN