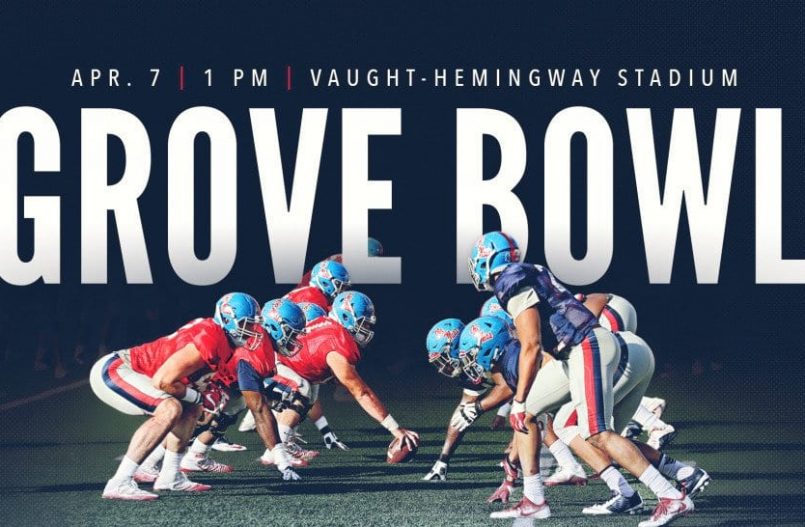 OXFORD, Miss. – Fans can get an early glimpse of the 2018 Ole Miss football team this Saturday at the Grove Bowl.

The Grove Bowl will serve as the finale of the Rebels’ spring drills, which began on Feb. 27. Admission is free for the Rebels’ annual spring game, which will kick off at 1 p.m. CT at Vaught-Hemingway Stadium. It will also be televised by ESPNU with a broadcast team of Mike Couzens, Andre Ware and Peter Burns.

The Regions Bank Grove Bowl format will feature the Ole Miss offense (wearing red) against the defense (wearing blue). The defense will be spotted a 27-0 lead as the offense tries to score enough to overtake them. The defense may increase its point total through turnovers that lead directly to scores, whether by returns for touchdowns (6 points + PAT) or returns into field goal range (3 points if FG made). In the latter, the field goal will be kicked on the next play after the return.

Other events of Grove Bowl weekend include the annual Chucky Mullins Courage Award Breakfast at 8 a.m. at the Grill at 1810 at the Manning Center. Kentrell Lockett will serve as the featured former winner for the sold out event.

In addition, both Rebel tennis teams will be in action on campus during Grove Bowl weekend. The women’s team hosts Georgia Thursday at 5 p.m. and Tennessee Saturday at 10 a.m., while the men face rival MSU Sunday at 1 p.m. Admission is free at the Palmer/Salloum Center.

Many former Ole Miss football players are also returning to Oxford this weekend for a reunion hosted by the M-Club.

Offensive coordinator Phil Longo returns for his second season spearheading the Ole Miss offense and has a bevy of weapons at his disposal. Junior All-American and Conerly Trophy winner A.J. Brown returns after setting the Ole Miss single-season record with 1,252 yards. DaMarkus Lodge and D.K. Metcalf join Brown to form one of the most explosive receiving corps in the country. The trio combined for 25 touchdowns last season.

Jordan Ta’amu will man the QB spot for the Rebels after starting the last five games behind center. Ta’amu completed over 66 percent of his passes and threw for 1,682 yards and 11 TDs, including three straight 365-plus yard performances to begin his Ole Miss career. The Rebels also return four of five starters on the talented offensive line.

On the defensive side of the ball, Wesley McGriff and the Rebels will have some big shoes to fill with the loss of all-conference performers Marquis Haynes and Breeland Speaks. Defensive tackles Josiah Coatney and Benito Jones, as well as defensive backs Zedrick Woods, Myles Hartsfield, Jaylon Jones and Ken Webster are all returning starters who will look to anchor the Rebel defense in 2018.