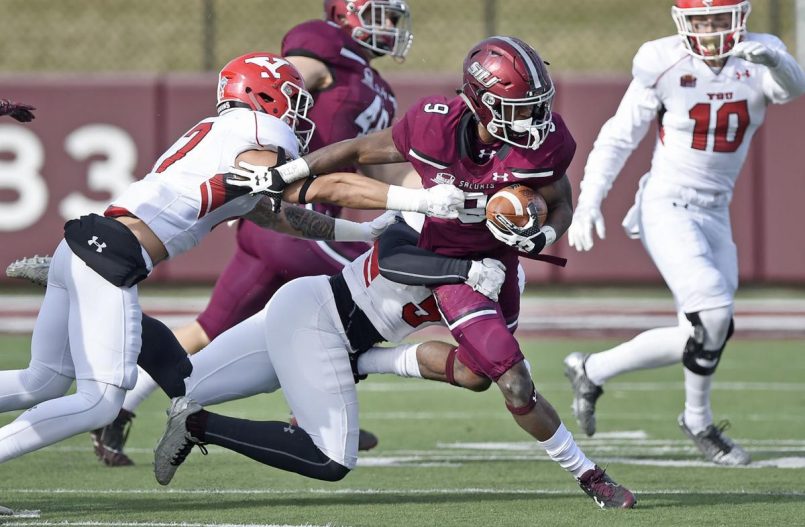 WHAT TO WATCH FOR…
• Ole Miss looks to improve to 2-0 under second year head coach Matt Luke … The Rebels have started the season 2-0 in five of the last six years … Ole Miss boasts an all-time record of 667-517-35 (.562 winning percentage).
• Ole Miss is 100-17-5 (.840 winning pct.) in home openers … When playing their home opener in Oxford, the Rebels are 77-10-4 (.868 winning pct.) … Ole Miss has won each of its last six home openers.
• Ole Miss is 102-32-3 (.755 winning pct.) in September home games (including home contests played in Memphis and Jackson), including a 77-19-2 (.796 winning percentage) mark in September games played in Oxford.
• This is the third overall meeting between Ole Miss and Southern Illinois … The Rebels are 2-0 all time against the Salukis, including a 42-24 win in 2011 in the most recent meeting between the two schools.
• Ole Miss tallied two scoring plays of 50 yards or greater in their season-opening win over Texas Tech … The Rebels had 12 last season.
• For the second straight season, Ole Miss tallied a kickoff return for a touchdown in its season opener … Prior to last year, Ole Miss hadn’t returned a kick for a touchdown since 2012.
• RB Scottie Phillips became just the eighth Ole Miss running back to surpass the 200-yard rushing mark in a single game with his 204 yard effort vs. Texas Tech … It was the 10th overall 200-yard rushing effort in program history … His 204 yards are the most by an Ole Miss running back making his debut.
• K Luke Logan was a perfect 4-for-4 in field goal attempts vs. Texas Tech.

SOUTHERN ILLINOIS HEAD COACH NICK HILL
Nick Hill (Southern Illinois, 2007) enters his third season leading his alma mater and has tallied a 9-14 record during his time in Carbondale. Hill, native of southern Illinois, grew up just 20 miles north of the SIU campus, where he was a football and basketball icon at DuQuoin High School. Hill started his collegiate playing career at Western Kentucky where he was on a basketball scholarship, but after broken hand prematurely ended his freshman season at Western, Hill transferred to Southern Illinois and switched back to football in 2004. Hill initially sat behind league Player of the Year Joel Sambursky, before taking over the starting job in 2006. In two seasons as the starter, he went 21-6 and set the school record for passing yards and completion percentage in 2007. Hill capped off his career in 2007 by leading the team to the Final Four of the NCAA Division I Football Championships, where the Salukis ultimately lost a 20-17 heartbreaker to Joe Flacco and Delaware. He was also a finalist for the Peyton Award in ‘07. After six seasons of professional football, Hill returned to SIU in 2014 as quarterbacks coach before being promoted to co-offensive coordinator in 2015, and then ultimately head coach in 2016. In 2016, the Salukis set program records for passing completions, attempts and yards while only throwing seven interceptions. Southern Illinois ranked in the top-10 nationally for passing offense, total offense and scoring offense for nearly the entire year. The offense was on its way to surpassing those marks in 2017 before starting quarterback Sam Straub was injured early in the eighth game and missed the remainder of the season.

SOUTHERN ILLINOIS SCOUTING REPORT
Southern Illinois is coming off a 49-10 season-opening win at Murray State. The road win was the first one at Murray State since 1991, ending a four-game losing streak for SIU in Murray, Kentucky. The Salukis forced six turnovers and tied a school record with three defensive touchdowns; a 23-yard fumble return by Qua Brown, an interception in the end zone by Airan Reed, and a 73-yard fumble return by Michael Elbert. The Salukis rushed for 300 yards in the win over Murray State, including a 132-yard performance from junior running back D.J. Davis, a All-America selection in 2017. SIU finished the 2017 season 4-7 and return quarterback Sam Straub, who is one of 36 FCS players on the College Football Performance Awards preseason watch list for its National Performer of the Year Trophy. Straub started the final three games in 2016 and the first eight games in 2017, before a season-ending wrist injury. The Saluki offensive line surrendered just 10 sacks in 2017 for an average of 0.91 sacks per game. That mark led the MVFC and ranked 10th in the nation. SIU’s starting defense features six juniors, four sophomores, one redshirt freshman and no seniors. Of the 22 players on the defensive side of the two-deep, only two are seniors. SIU ranked eighth in the FCS in 2017 with 13 fumble recoveries.

HOME OPENER
Ole Miss is 100-17-5 (.840 winning pct.) in home openers during its 124 seasons of fielding a football team. The Rebels did not have a home game during the 1900 season. When playing their home opener in Oxford, the Rebels are 77-10-4 (.868 winning pct.). Ole Miss has won each of its last six home openers. The Rebels’ last season-opening loss came in 2011 when BYU beat Ole Miss 14-13 in Oxford. Ironically enough, the Rebels rebounded the next week with a 42-24  win over Southern Illinois.

SCOTTIE TODDY
RB Scottie Phillips recorded 204 yards, on 16 carries with two touchdowns in his first career start during Ole Miss’ opening week win over Texas Tech. The 204 rushing yards were the second-most during College Football’s opening weekend and are the most by an Ole Miss running back making his debut. Phillips became just the eighth running back to run for over 200 yards in a game. It was the 10th overall time in program history. Phillips is currently averaging 12.75 yards per carry, tops in the SEC and third nationally.

A PERFECT START
Replacing Ole Miss’ all-time leading scorer and leader in almost every kicking category is no easy task, but K Luke Logan got off on the right foot Saturday as the sophomore kicker was a perfect 4-for-4 in field goal attempts in the win over Texas Tech. Luke, who was 2-of-3 on field goals in 2017 when he had to step in for an injured Gary Wunderlich for a few games, added a career-long 39-yard field goal to his ledger on Saturday. Logan currently ranks second in the SEC and 15th nationally in scoring (17).

DON’T BLINK
In 2017, Ole Miss’ average touchdown drive was 99 seconds, the fastest in the nation; the Rebels wasted no time trying to repeat that stat in 2018. It took Ole Miss only two plays and 33 seconds to record its first touchdown of the 2018 season Saturday vs. Texas Tech. It was the third time in the last six games that Ole Miss has scored a TD within the opening 39 seconds (39 seconds at Mississippi State (11/23/18), 31 seconds vs. Arkansas (10/28/17). The 24 first quarter points were the most in an opening 15 minutes since Sept. 12, 2015 vs. Fresno State, when the Rebels tallied 28 to open the game. Ole Miss finished the day with three scoring drives that resulted in TDs that took less than 50 seconds.

OFFENSIVE NOTES
• RB Scottie Phillips recorded 204 yards, on 16 carries with two touchdowns in his first career start for Ole Miss … Phillips became just the 8th running back to run for over 200 yards in a game … It was the 10th overall time in program history … His 204 yards are the most by an Ole Miss running back making his debut.
• Phillips currently ranks second nationally in rushing yards per game (204.0) and third in yards per carry (12.75).
• Ole Miss opened the game vs. Texas Tech with a two play, 69-yard drive that only took 33 seconds … It was the third time in the last six games that Ole Miss has scored a TD within the opening 39 seconds (39 seconds at Mississippi State (11/23/18), 31 seconds vs. Arkansas (10/28/17).
• Ole Miss is a perfect 4-for-4 in redzone opportunities.
• Ole Miss tallied two scoring plays of 50 yards or greater during its season opener vs. Texas Tech … The Rebels had 12 last season.
• Ole Miss had three scoring drives vs. Texas Tech that resulted in TDs that took less than 50 seconds.
• Ole Miss’ 24 first quarter points against Texas Tech were the most in an opening 15 minutes since Sept. 12, 2015 vs. Fresno State, when the Rebels tallied 28 to open the game.
• QB Jordan Ta’amu completed 22-of-32 passes for 336 yards and two touchdowns against Texas Tech.
• WR A.J. Brown led all Ole Miss receivers with seven catches for 93 yards and one touchdown vs. the Red Raiders.
• WR Braylon Sanders tallied a career-high in both catches (four) and yards (60) during Ole Miss’ season-opening win vs. Texas Tech.

124TH SEASON OF OLE MISS FOOTBALL
This game will kick off the 124th season of football at Ole Miss and the second under head coach Matt Luke. The Rebels boast an all-time record of 667-517-35 (.562 winning percentage). Ole Miss did not field teams in 1897 due to an epidemic of yellow fever, and also in 1943 when football was abolished at all Mississippi state-supported institutions by the Board of Trustees. Ole Miss’ first-ever victory came in a 56-0 drubbing of Southwestern Baptist University (Union University) in Oxford back in 1893.