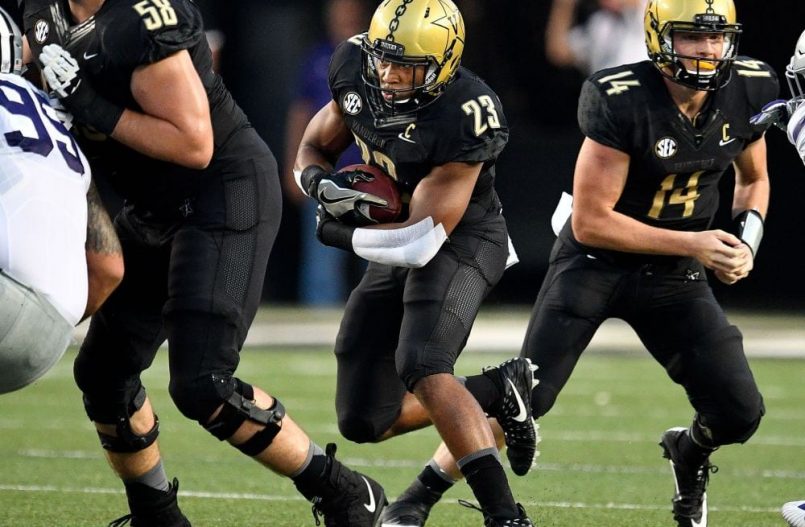 WHAT TO WATCH FOR
• Saturday marks the 93rd meeting between Ole Miss and Vanderbilt dating back to 1894.
• It is the third-most played series of all-time between Ole Miss and its 2018 opponents (Mississippi State, LSU). The Rebels lead the series 51-39-2 overall. The Rebels have also won four of the last five with Vandy.
• The Rebels are second nationally in passing (354.8 ypg), fifth in total offense (535.9) and 19th in scoring (37.5 ppg).
• Ole Miss has thrown for 300 or more yards in eight of its 10 games this season, including two games of 400 or more yards.
• QB Jordan Ta’amu leads the SEC and is second in the NCAA in both passing yards (3,374) and passing yards per game (337.4) … Ta’amu ranks fifth nationally with 14.93 yards per completion.
• Ta’amu ranks eighth in program history with 5,056 career passing yards.
• RB Scottie Phillips ranks first in the SEC and eighth nationally in rushing touchdowns (12) and seventh in the NCAA in total TDs (14) … Phillips’ 927 yards rushing is third in the conference.
• WR A.J. Brown ranks fifth nationally in the NCAA in receiving yards (1,047).
• Brown’s 2,711 career receiving yards are the most in program history.
• LB Mohamed Sanogo ranks seventh in the SEC with 8.4 tackles per game.
• Over the last three contests, Sanogo has averaged 14.3 tackles per game.
• Ole Miss ranks second in the SEC and 10th nationally with three defensive touchdowns this season.
• The Rebels lead the SEC and are ninth in the NCAA with only nine turnovers lost the entire season.

VANDERBILT HEAD COACH DEREK MASON
Derek Mason (Northern Arizona, 1993) is in his fifth year as Vanderbilt’s head coach and has an 22-37 record with the Commodores, including a 4-6 mark so far this season. In 2016, Mason led Vanderbilt to a 6-6 record during the regular season to earn a bowl berth for the first time since 2013. He served as associate head coach and Willie Shaw Director of Defense for the Stanford Cardinal from 2011-13 and helped Stanford win consecutive Pac-12 championships and make back-to-back Rose Bowl appearances. He was a finalist for the Broyles Award (nation’s top assistant) in 2012. Before going to Palo Alto, Mason coached in the NFL with the Minnesota Vikings (2007-09). His pro career also included stops with the St. Louis Rams, New York Giants and Oakland Raiders. Other college stops include Ohio University, New Mexico State, Bucknell, Idaho State and Weber State.

VANDERBILT SCOUTING REPORT
Vanderbilt is 4-6 overall and 1-5 in conference play entering this week’s game with Ole Miss, including dropping four of its last five contests. The Commodores are averaging over 392 yards of total offense per game, with 232 coming through the air and 160 yards per game on the ground. Senior signal-caller Kyle Shurmur ranks fifth in the SEC with 2,286 passing yards on the season. Mond is completing 61.0 percent of his passes on the season, with 17 touchdowns and five interceptions. Mond’s top target has been Kalija Lipscomb. The junior wide receiver ranks third in the SEC with 731 receiving yards and seven TDs. Tight end Jared Pinkney is also a dangerous target for Vandy, tallying 35 catches for 573 yards and six touchdowns this season. Junior Ke’Shawn Vaughn leads the Vandy rushing attack, averaging 94.3 yards rushing per game, the third-best average in the SEC. Defensively, the Commodores are allowing over 421 yards and 25.9 points per game. Vandy gives up over 200 yards rushing per game. Junior linebacker Jordan Griffin ranks second in the SEC with 9.8 tackles per game. JoeJuan Williams leads a ball-hawking secondary for Vanderbilt. The junior from Nashville, Tennessee, is fourth in the SEC with three interceptions. The Commodores ranks third in the conference with a turnover difference of plus-six.

OLE-MISS-VANDERBILT SERIES HISTORY
Ole Miss and Vanderbilt will be meeting for the 93rd time in a series that started in 1894. It is the third-most played series of all-time between Ole Miss and its 2018 opponents (Mississippi State, LSU). The Rebels lead the series 51-39-2 overall. The Rebels have also won four of the last five with Vandy.

REBELS VERSUS SEC EAST
• Since the SEC started divisional play in 1992, Ole Miss is 36-37 (.494 winning percentage) vs. the Eastern Division.
• The Rebels and Commodores have met every season since divisional play started, and Ole Miss leads 17-9.
• Ole Miss is 16-22 (.421 win pct.) against SEC East schools on the road.
• The Rebels are 0-1 this season vs. East schools with a home loss to South Carolina earlier in the season.

PHILLIPS NEARING THE 1K MARK
With two games remaining for the Rebels, RB Scottie Phillips has the 1,000-yard rushing mark in sight. Phillips, the junior college transfer, in just his first year at Ole Miss, is 73 yards short of becoming just the sixth Ole Miss running back to go past 1,000 yards rushing. It would mark the eighth time in Ole Miss history for a back to reach that mark. BenJarvus Green-Ellis and Kayo Dottley both accomplished the 1,000-yard mark twice in their careers.

DANGEROUS TRIO
All season long, the Ole Miss offense has forced opposing defenses to pick their poison. The Rebels are fifth in the country in total offense and Jordan Ta’amu, A.J. Brown and Scottie Phillips have been a big reason why. Ta’amu recently be-came just the fourth Rebels quarterback to throw for more than 3,000 yards in a season and is on pace to challenge Chad Kelly’s single-season passing record set in 2015. After his 127 yards receiving vs. Texas A&M, Brown became the only receiver in Ole Miss history to go over 1,000 yards receiving in multiple seasons. If Phillips gains 73 more  rushing yards, Ole Miss will be the only team in the country to have a 3,000-yard quarterback, a 1,000-yard running back and a 1,000-yard receiver.

CHASING THE 300-YARD MARK
Quarterback Jordan Ta’amu has thrown for 300 or more yards eight times this season, including surpassing the 300-yard mark in a program-best five straight contests. With two games remaining, he’s currently tied with Chad Kelly (2015) for the program record of 300-yard games in a single season. His 11 career 300-yard games is tied for second in program history and are just one short of the school record held by Kelly.

A NEW #1
With his 127 yards vs. the Aggies, WR A.J. Brown became Ole Miss’ all-time leading receiver with 2,711  yards, passing Shay Hodge’s (2006-09) mark of 2,646. Brown ranks fifth in the country in receiving yards (1,047) and eighth nation-ally in receptions per game (7.2). The junior wideout from Starkville, Mississippi, has five 100-yard receiving games this season, including three straight. Brown is the only Ole Miss receiver in program history to record 60 or more receptions in back-to-back seasons. With 1,047 receiving yards this season, Brown is the only receiver in program history to go over 1,000 yards receiving in multiple seasons. With two games remaining in the season, Brown continues to etch his name in the Ole Miss record books.

SANOGO’S SWEET 16
Prior to this season, there had been only two Rebel defensive players in the last 20 years tally 16 or more tackles in a single game; LB Mohamed Sanogo has now accomplished that feat twice in the last three games. Sanogo currently ranks fourth in the Southeastern Conference with 9.2 tackles per game. He has led the Rebels in tackles five times this season. If Sanogo can finish the season as the Rebels top tackler, it’ll be the fourth straight season that an LB has led Ole Miss in tackles.

COMING ON AS OF LATE
Octavious Cooley hadn’t tallied a single catch through the first six games for the Rebels, but the junior tight end has hauled in seven catches for 174 yards and one touchdown over the last four contests. Cooley tallied a career-high three catches for 66 yards last weekend at Texas A&M.