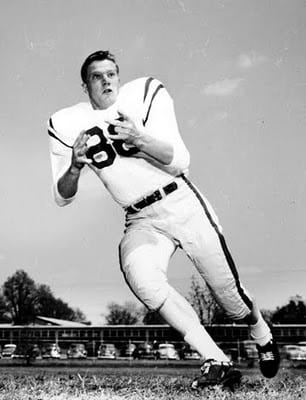 OXFORD, Miss. – Ole Miss and the State of Mississippi lost another sports legend Saturday, June 17, 2017, with the passing of football star Larry Grantham, 78, who was also a member of the Super Bowl III champion New York Jets.
Stringer Funeral Home in Crystal Springs, Mississippi, is in charge of the service, which will be held Wednesday, June 21, at 11 a.m. at the First Baptist Church in Crystal Springs. Visitation will be Tuesday from 5-8 p.m. at Stringer Funeral Home.
Grantham played linebacker and end for legendary Ole Miss coach John Vaught from 1957-1959, earning three letters, and helped lead the Rebels to a 28-4-1 record, including Sugar Bowl victories over Texas and LSU and a win over Florida in the Gator Bowl. He also was a letterman on Coach Tom Swayze’s 1958 Ole Miss baseball team.
The 1959 team, which finished 10-1 and earned a share of the national championship, is considered one of the best in Ole Miss football history. When Jeff Sagarin computed his list of the all-time highest-rated college football teams from 1956 to 1995, the Ole Miss Rebels ranked No. 3 behind Nebraska’s 1995 and 1971 teams.
Grantham played a key role as the 1959 Rebel defense shut out eight opponents while allowing only two touchdowns all season. Ole Miss outscored its opposition 329-21 that season, with the only other TD given up being LSU great Billy Cannon’s 89-yard punt return on Halloween Night in Baton Rouge that lifted the Tigers to a 7-3 win.
Ole Miss, however, got its revenge two months later in a Sugar Bowl rematch as the Rebels dominated LSU, 21-0, and held the Tigers to minus-15 yards rushing. Cannon was limited to 8 yards as Grantham, who also caught an 18-yard TD pass from Bobby Franklin, shadowed the 1959 Heisman Trophy winner throughout the contest. “Grantham hit Cannon every time he moved that day,” recalled Ole Miss quarterback Jake Gibbs, who had a 43-yard TD pass to Cowboy Woodruff to give the Rebels a 7-0 second quarter lead.
A member of the Ole Miss Team of the Century, Grantham was inducted into the Mississippi Sports Hall of Fame in 1980 and the Ole Miss Sports Hall of Fame in 1995. He was a two-time All-Southeastern Conference selection and was chosen to play in the Hula Bowl all-star game.
Following his Ole Miss career, Grantham was drafted in 1960 by the New York Titans/Jets of the American Football League and the Baltimore Colts of the National Football League. Grantham chose to sign with the Titans and quickly established himself as one of the keys to a Jets defense that made the playoffs in 1968 and 1969, winning the AFL Championship in 1968 and then defeating the Baltimore Colts, 16-7, in Super Bowl III. He was credited with three tackles and two pass defenses in the win over the Colts, a game which Jets quarterback Joe Namath had guaranteed a New York victory.
With Grantham as the starter, the New York AFL franchise went from the worst team in an upstart league to World Champions in nine years. Although considered small by pro football linebacker standards (6-0, 210), Grantham was a five-time AFL All-Star during his 13-year career (1960-72) with the team and was named to the American Football League all-time second team. He was inducted into the New York Jets Ring of Honor in 2011.
Grantham played in 175 AFL/NFL career games and his defensive totals included 43 individual takeaways, still a franchise record. He also recovered two fumbles for TDs. Grantham played one last season in 1974 for the Florida Blazers of the World Football League.
Following his professional career, Grantham spent time broadcasting Jets games on the radio and was involved in business and banking. He remained close to the Ole Miss family and served as a sideline reporter on the Ole Miss radio football network (1980-82).
Born September 16, 1938, in Crystal Springs, Grantham earned two letters in football, two in basketball and three in baseball while playing at Crystal Springs High School. He was captain of the 1955 football squad, gaining all-star mention.
Follow Ole Miss Football on Twitter (@OleMissFB), Facebook and Instagram. For more information, visit www.OleMissSports.com.
-UM-