STOREY WAS THE STORY: Ole Miss vs. Notre Dame 1977

Back in the fall of 1977, almost four decades ago now, Ole Miss beat Notre Dame 20-13 in football. The headliner was in Jackson, Miss., because that was back in the era when Ole Miss played most of its biggest games away from campus, either in the capital city or nearby Memphis, Tenn.

That practice came to a halt, for the most part, in the mid-1990s when Ole Miss decided to play almost all of its home games on campus in Oxford. But the Rebels’ big victory against the Fighting Irish will forever be linked to the football field at Mississippi Veterans Memorial Stadium, where State St intersects Woodrow Wilson Ave., in the neighborhood of the University of Mississippi Medical Center.

Notre Dame went on to win the national championship that season, and the loss to Ole Miss was its only setback. The Irish won the rest of its games, including a national title-clinching 38-10 victory against Texas in the Cotton Bowl.

But on that unbearably hot and humid afternoon in Jackson, it is highly doubtful Ole Miss would have won the football game without the services of a tough, hard-nosed linebacker turned fullback named James Storey.

James Storey’s hometown of Ripley is a moderately-sized community of a few thousand souls in the northeast section of Mississippi in Tippah County, which joins the Tennessee border. It’s where he lives today, still working as a part of the school system – having been a teacher, coach, and principal. He played high school football there, graduating in 1974.

Ole Miss came calling, along with other schools like Nebraska and Mississippi State. Storey decided Oxford was the place to spend four years going to college and playing football.

His arrival at Ole Miss was a part of one of the first classes which included black football players at the University of Mississippi. There were already some there, like Ben Williams and James Reed, Pete Robertson and Gary Turner. But not many, and Storey knew that was the case.

“Ole Miss showed the most interest. And I remember my recruiting visit,” Storey said. “I went to a ballgame, and they said they had four black athletes on the team. I sat there for a half and looked for the four, and I never could find them all. Finally, Gary Turner came off the field and took his helmet off and I said, ‘There he is.’ He had this real big Afro.”

It was during that same year, his senior season of high school, that Storey recalls watching an Ole Miss game live on television. And that, according to him, was one of the moments that sealed it for him to head to Oxford.

“It was Ole Miss and Tennessee,” he said. “I’ll never forget James Reed that day. He broke one run of about 90 yards; it seems like, and that was just a big game for me to watch live on TV. Back then I used to watch the Tennessee Volunteers football show on Sunday mornings. It was on a Memphis station. I remember their players like Condredge Holloway and Haskell Stanback. And I just really remember that game.”

The Rebels won it 28-18. Tennessee had sent Storey some letters but wasn’t actively recruiting him.

It was the 1973 season, and legendary John Vaught had come out of retirement to coach again. He had retired following the 1970 season, and Billy Kinard had made it through two seasons and three games as head coach before being relieved of his duties after a 1-2 start in ‘73. Vaught returned, the Rebels went 5-3 the rest of the way, including wins over Southern Mississippi, Florida, Vanderbilt, Tennessee, and Mississippi State, and finished 6-5.

But then Vaught retired again, and assistant coach Ken Cooper was elevated to head coach following the 1973 season.

Storey remembers how things were in his high school days, back when Mississippi didn’t have a high school football playoff system. His Tigers were an important part of the old Tombigbee Conference, named after the river that runs through northeastern Mississippi.

Ripley played conference opponents each season like Baldwyn and Booneville, Saltillo and Okolona, Fulton and Kossuth, among others. One game against another conference foe that he remembers was a wakeup call to another level of football. Storey was supposed to visit Jackson State the following day on a recruiting visit but declined.

“We played Shannon one Friday night, and I took a beating,” said Storey, who played high school football for two different head coaches – “Red” Shelton and “Mac” Curlee. “I remember this one guy for Shannon, his name was Willie Bob Gates. I ran the ball up in there, and the next thing I knew, I was flat on my back. He was standing over me, and he said, ‘Good evening. My name is Mr. Willie Bob Gates. You’ll be seeing me for the rest of the night.’ I didn’t feel like going to Jackson State the next day after all that.”

Storey said from time to time through the years he has run into Gates. “And I introduce him to whoever I’m with as Mr. Willie Bob Gates,” he said, laughing.

Storey, 6-feet and 200 pounds back then, came to Ole Miss as a defensive player, and he admitted: “defense was probably my better game.” But after only one season with the Rebels, Cooper and staff decided Storey could better help the program in the offensive backfield.

“The game was different back then,” he said. “You had your bruiser-type running backs, three yards and a cloud of dust. Defensively you had your Dick Butkus-type linebackers. I came in as a linebacker and played there my freshman year. I made the traveling squad and was a second-team linebacker. That next spring, we had a couple of running backs get hurt. Coach Cooper called me in and asked me about moving to running back.”

And that’s where he stayed the remainder of his Ole Miss career.

During his senior season in 1977, Storey was the team’s leading rusher with 585 yards on 143 carries and seven touchdowns.

He only caught seven passes all season, and three of them were for touchdowns.

So you may be wondering why he was so important to that monumental and historic victory against Notre Dame.

The photos of those touchdowns, especially the first one with him hoisting the football straight up in the air as he crossed the goal line after a pass from quarterback Bobby Garner, are iconic.

The other scoring pass, from quarterback Tim Ellis, was thrown behind him a bit, and he reached back and hauled it in one-handed for what proved to be the winning score.

Those were the only two touchdowns of the game for the Ole Miss Rebels. 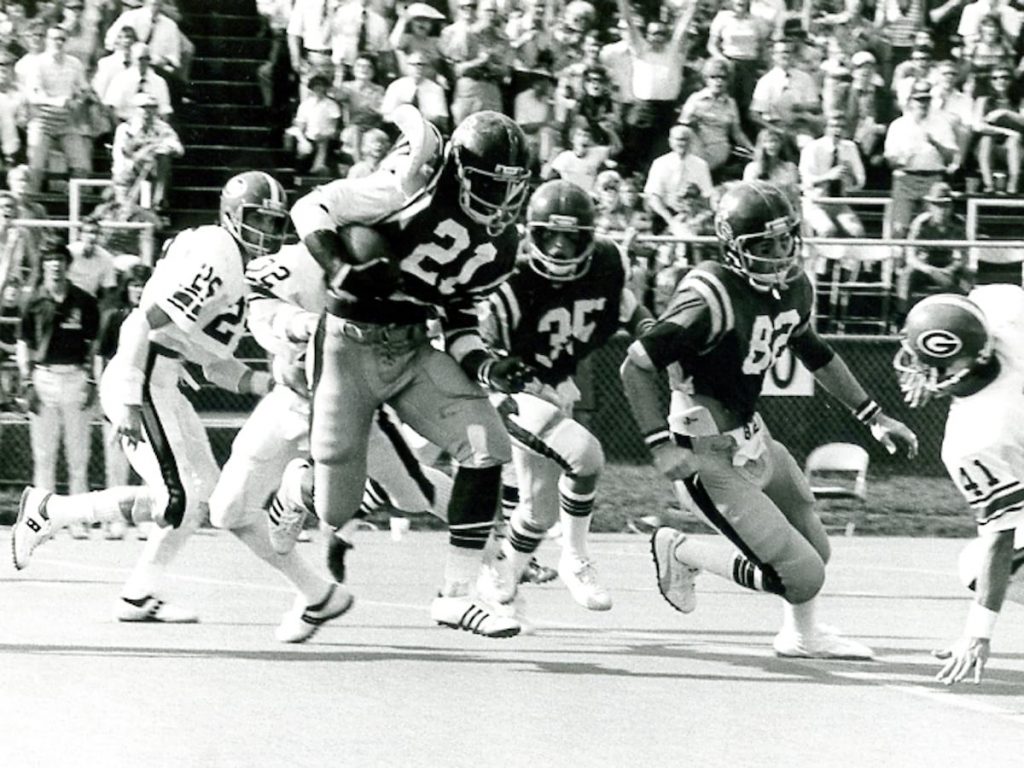 Ole Miss went 3-8, 6-5, 5-6, and 5-6 during Storey’s years on the field, and they never played in a bowl game. The final two records were eventually changed to 6-5 with MSU’s forfeiture of the Golden Egg each of those seasons due to NCAA violations.

Some of the Rebels’ victories during those four seasons, however, were against some very good football teams. It was several of the losses against what many would consider inferior opponents that didn’t allow those teams to reach their goals.

“Man, we were the giant killer,” Storey said. “We’d show up one Saturday and then wouldn’t show back up. We beat some good teams. Georgia was ranked No. 4 in the nation one year, and we beat them. We beat them two years in a row, and I scored my first touchdown in college against Georgia in 1975. The Notre Dame game was big. We beat Alabama down in Jackson.”

They also beat Tennessee, the team whose highlights show Storey used to watch on TV every Sunday, two times while he was in college.

He was supposed to finish his Ole Miss career against State in Jackson, but he was injured.

“I missed the last game of my senior year,” he said.

That was an Egg Bowl loss to Mississippi State, one of those two games that later on, because of forfeit, the Rebels got back as victories.

After graduation, James Storey went back to Ripley to raise a family with his wife, Brenda Cowan, who he had gone to high school with at Ripley.

“My high school sweetheart. She has always been my biggest supporter,” he said. “She’s taught me and shown me to love unconditionally.”

He’s always been involved in their church. They raised three children – Kedrick, Evie, and Anthony. Two of them went to Mississippi State. None went to Ole Miss.

They have six grandchildren. One of them, grandson, Kris, is going to be a freshman at Ole Miss this fall.

“He is going to help with the ladies basketball team,” Storey said. “On that hill, I used to run sprints on, he will be working as a student manager in that new Pavilion.”

That makes James Storey quite happy since his kids chose a different path. Kris reconnects the Storeys with James’ alma mater, the place that he made a name for his family and left quite a legacy in the annals of Ole Miss football from his playing days in the 1970s.

“I told my family, this time we’re going to get it right,” he said, through some laughter, of Kris’ decision. “We’re getting it right this time.” – RN

This is just a sample of the types of features you’ll find in every issue of Rebel Nation Magazine. Subscribe online today at rebelnationmagazine.com and have every issue delivered right to your mailbox. 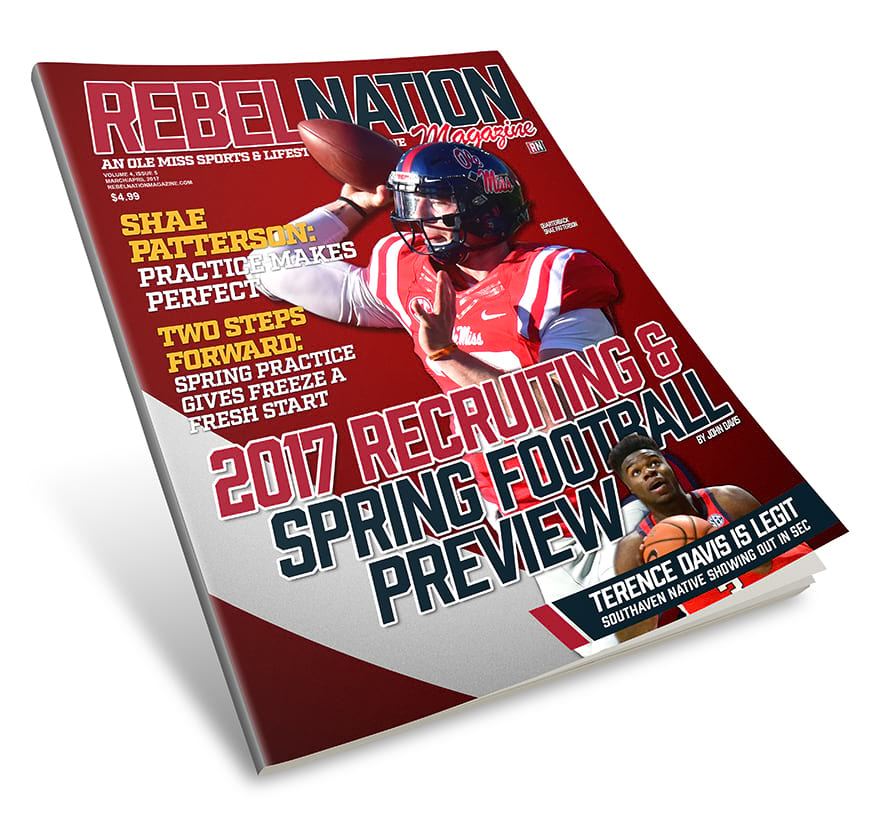