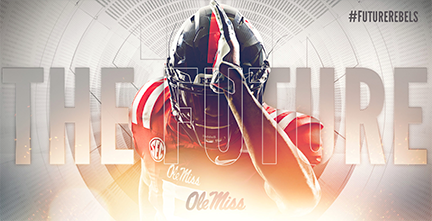 OXFORD, Miss. – The newly minted early signing period made for uncharted waters for first year head coach Matt Luke as well as everyone across the college football landscape. It was hard to gauge how many players would take the advantage of the early signing period.

It undoubtedly put Luke and his staff on the clock from the moment he was hired permanently to be the head coach on November 25. They certainly took advantage of the opportunity. Ole Miss signed 15 players Wednesday, jumping 29 spots in 247 composite rankings. The class is comprised of six four-star recruits and 10 defensive players.

“We did a really tremendous job of getting on the road after the Egg Bowl and making up ground,” Luke said. “I really appreciate the trust of these families. A lot of really good relationships were forged.”

The morning started with a pair of wide receivers committing to an already immensely talented position group. Consensus four-star wideout Elijah Moore flipped from Georgia to Ole Miss and will provide speed as a slot receiver, something particularly important for the Rebels. Duncan, South Carolina, native Demarcus Gregory will be joining Moore. Gregory will enroll in January and go through spring practice.

“Having a big, physical guy like Gregory is something we are excited about,” Luke said. “Then obviously having a guy like Elijah Moore that can do so many different things like return punts and kicks. He is a slot guy and we really haven’t had a guy like that. So really excited about that as well.”

Ole Miss continued to add offensive weapons by signing the number one junior college running back in the country in Scott Phillips. He will be competing for immediate playing time with the departure of Jordan Wilkins and will also arrive on campus in January to participate in spring practice.

Perhaps Luke’s biggest splashing during this early signing period came when he landed a commitment from four-star quarterback Matt Corral out of Long Beach, California. The U.S. Army All-American’s commitment seemed to give this class a spark of momentum in the final week leading into signing day.

“I think it did shift momentum,” Luke said. “I think when he decided to come people got excited. It was a position of need and we filled that. That was the most important thing for me.”

The largest gap Ole Miss needed to fill was undoubtedly at linebacker. The staff signed three on Wednesday headlined by junior college All-American Vernon Dasher out of Coffeyille CC in Georgia. Dasher had 71 tackles and two forced fumbles in his lone season there. He is joined by a pair of products in Jacquez Jones from Tuscaloosa and Jonathan Hess from Vestavia Hills.

“That was a huge position of need,” Luke said. “I am very excited to get him in here along with Hess and Jaquez Jones.”

“I felt it was imperative to sign a midyear quarterback that could come in and compete in the spring,” Luke said. “I feel like we did that that Matt Corral. He is a tremendous talent that will come in here and compete. We are excited about that.”

Four defensive linemen inked to play at Ole Miss. James Williams, a defensive end out of Callaway High School in Jackson flipped his commitment from Mississippi State and elected to head to Oxford instead. The Rebels landed a rather intriguing player in Jonathan Cunningham Out of Odenville, Alabama. He’s a 6-foot-6, 345 pound defensive tackle that was recruited heavily by offensive line coach Jack Bicknell Jr. The staff will play him on the defensive side of the ball, but also believe he has the potential to play on the offensive line.

“He’s a big, physical nose guard,” Luke said. “But I also think he has the chance to be an NFL offensive guard with his development. He is kind of a swing guy and I really like the potential.”

“They’re a really solid group to start with in that early signing period,” Luke said.

The secondary got a boost with the signings of Madison Central’s Cameron White and Keidron Smith.

“Cam has played defensive back, running back and wide receiver,”  secondary coach Jason Jones said. “So he is a really good athlete and a smart football player.”

Jones offered a similar notion on Smith, citing the physicality he brings when the football is in the air and the ball skills he possesses to go make a play on it.

The Ole Miss recruiting class currently sits 31st in the country according to 247Sports heading into the February signing day.

“I said all along that we just maintained relationships with these guys,” Luke said. “Ole Miss sells itself. People that come visit here want to come to Ole Miss. All you had to do was stay within striking distance and when the fear of the unknown was removed, I think people were excited to come here.”

Ole Miss is not done yet, though Luke noted that he has eight or nine more spots left to fill and would like to do so with a couple of wide receivers, a tight end, an offensive lineman and possible a couple more defensive linemen.

“It is a really exciting day for the Rebels,” Luke said. “A lot of really positive energy and momentum. I really appreciate the work of our staff.” – RN 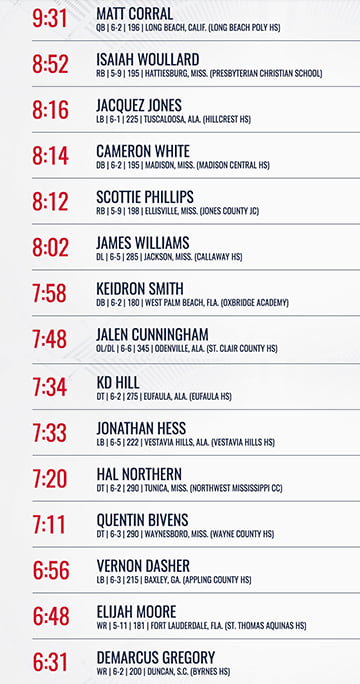