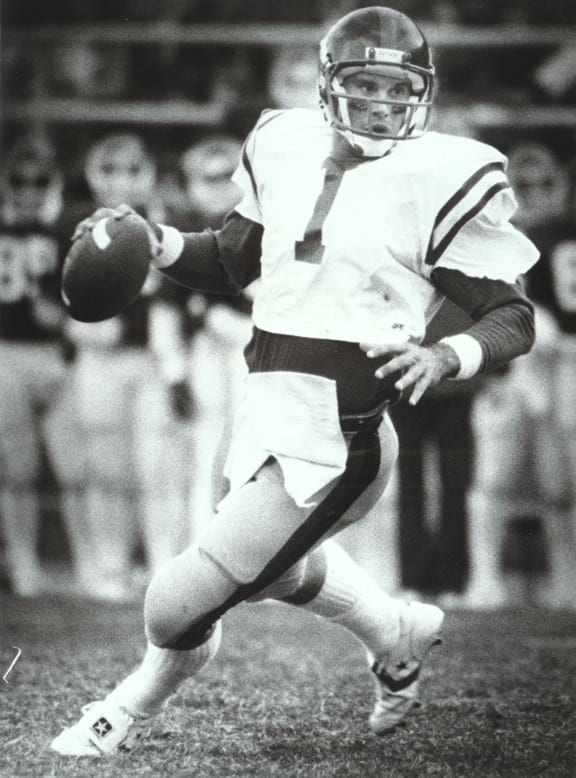 John Fourcade is one of those players who would thrive in any era of football. He chose Ole Miss after his high school career at Arch Bishop Shaw High School in Louisiana because the bigger schools said he’d have to ride the bench. This was in the late 1970s before 24-hour sports channels, social media and digital recordings. Before kids put college hats on a table and performed the three card Monty with their college selection on National Signing Day. Fourcade, like many, actually signed late. He was being chased by Notre Dame, Oklahoma, LSU, Alabama and a long list of other Division 1 schools to work under center.

But the Louisiana Rebel chose Ole Miss over the other college offers because it was the right fit for him. At the time, enrollment was under 10,000 and the campus wasn’t spread out and it was closer to home. The Rebels said come on up and compete for the starting position. John Charles Fourcade, Jr., ran the Split Back Veer offense at Shaw and he’d be running the same thing at Ole Miss. He came in along with new coach Steve Sloan under the tutelage of quarterback coach David Lee.

“Lee did most of the recruiting on me,” Fourcade said. “And he said ‘We are looking at you playing as soon as possible.’”

Fourcade visited Notre Dame and a few others because he “wanted to make sure Ole Miss was the school I wanted to go to.” So from 1978 to 1981, Oxford was home for the option quarterback. He would go on to gain 6,713 career yards – breaking the career record of Archie Manning. His name is scattered among Ole Miss football records. He is on the list of:

“He told me, ‘I went to Ole Miss, I love Ole Miss but look, take your time and enjoy yourself. If you’re not going to stay in state and go to LSU then look at Ole Miss’ and I did. It was a good opportunity.”

Former Rebel head coach Steve Sloan arrived in Oxford late in the recruiting year and knew that Fourcade was a fit for his offensive scheme.

“We were looking for an athletic quarterback. A guy who could run, throw and extend plays maybe into a big play,” Sloan said. “And John was exactly that type of person. We had a lot of option plays as well. It didn’t matter how tall a guy was he just needed to be athletic.”

But when Fourcade reported to fall practice, his name was at the bottom of the depth chart – number seven on the quarterback slot. He eventually worked his way up to around third string but with Bobby Garner and Roy Coleman in front of him, he settled into a “redshirt” year. But a few games into his true freshman campaign, Sloan called on the Louisiana Rebel to get the offense moving.

“We were getting pounded by Georgia and I remember the coaches came over and said, ‘we’re taking the redshirt off of you’,” Fourcade said.

Facing a third down and 36 to go for a first down, Fourcade entered the game. Sloan called the freshman’s number.

“I ran an option and got 37 yards for the first down,” Fourcade said. “I took it down the sideline in front of our bench. I ran the whole thing. It was welcome to the SEC and I played ever since that time.” 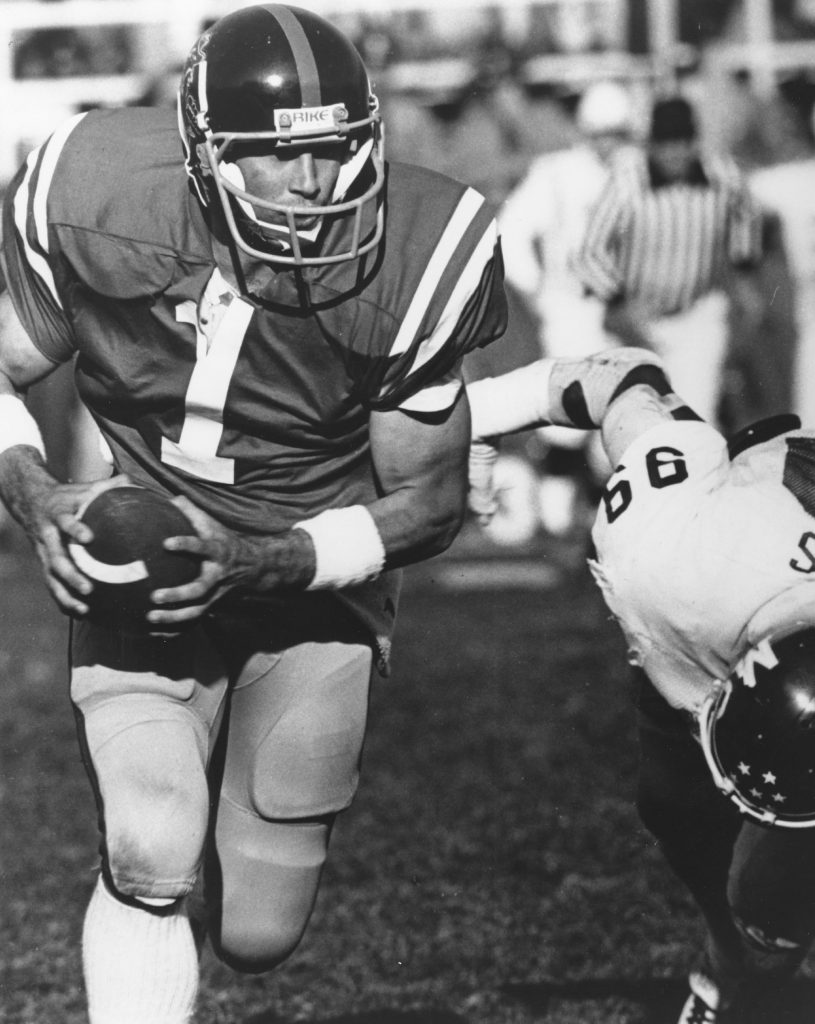 Sloan enjoyed his relationship with Fourcade as his coach.

“John had a linebacker mentality,” Sloan said. “I never had a problem with John at all. We were always good offensively in the conference but we weren’t quite as good defensively to match it up. I consider it an honor to have coached him.”

Some of his more famous on the field moments took place in his final Egg Bowl. Trailing the Bulldogs and less than a minute to go, Fourcade engineered a scoring drive, with a little help from a pass interference call.

“He played a fabulous game. I remember giving him the signal to run ‘38 Loaded,” Sloan said. “We needed the win, they were a lot better than us at that point. We got the ball on our 40 with 26 seconds to go and he completed a pass and another pass. Then we threw another pass in the end zone and got the interference and put the ball on the two-yard line with three or four seconds and he scored. I couldn’t believe it myself,” Fourcade recalled.

Fourcade would start every game the rest of the year and until he graduated in 1981. He set records and he’s still ranked high in plenty of Rebel football statistics but had he come along to play in today’s “pistol” type offenses, Fourcade may have set the bar for years to come.

“I threw 20 to 25 times a game and ran 15 to 20 times a game,” he said. “The thing they run today is out of the shotgun and it’s a variation of the split back veer but we were under center. If this offense right now in the NFL was around when I was playing with the Saints, that would have been more suited for me because I would run the football and throw the football.  I’d probably still be playing, you never know.”

After completing his Ole Miss career, Fourcade played in the Senior Bowl, Hula Bowl and the Blue Gray Game. He was MVP of the Senior Bowl and pocketed $1,500 for his efforts along with a new car that he gave to his mother. On draft day, the NFL didn’t call his name so he headed north of the border to play in the CFL for a few seasons with the B.C. Lions then he was traded to the Winnipeg Blue Bombers.

But he wasn’t happy with the CFL and came home to join the USFL first with the Birmingham Stallions and then with the Memphis Showboats. After the USFL folded, he had a tryout with the New York Giants who had coaches with Ole Miss ties. Fourcade injured his back and was let go from the team. So he came back to Ole Miss and finished his degree. Fourcade still had the desire to play in the NFL and he wrote a letter to Jim Finks the general manager of his hometown New Orleans Saints.

“Sure enough I went down there and got a tryout and signed with the Saints in 1986,” he said. “Then they went out and signed Bobby Herbert, they had Dave Wilson on the roster and they signed Richard Todd. Then they let me go. I wasn’t too thrilled about that.”
But the 1987 NFL Strike took place and the Saints needed players. They called Fourcade but he was on his way to Oakland to sign and play. He was still upset with the Saints for how they treated him.

“I told them other teams are calling too,” he said.

Fourcade dropped his younger brother, Keith, off at the Saints facility and headed for the airport. Finks soon got to Keith and convinced him to come back and take the opportunity they had for him.

“He assured me that I’d be on that football club,” Fourcade said. “I changed my mind and signed right there with the Saints.”

Fourcade led the team to a 2-1 record positioning them for a 12-3 record in 1987 before losing in the Wildcard game to the Minnesota Vikings.

“That was the first winning season ever for the New Orleans Saints and the first playoff season ever,” Fourcade said.

And that strike year set Fourcade up for success and honors.

“The funny thing is, I’m in the ‘NFL 100 Greatest Touchdowns’ and it’s in NFL Follies,” he said. “Prior to the half in the Rams game, I threw a hail mary and they intercepted it and ran it down the field and their DB fumbled it and one of their linemen picked it up and started running across the field.”

With Fourcade, the last man between him and the goal line, a teammate forced the Rams lineman to fumble.
“I picked it up and ran it back 80 yards for a touchdown,” he said.

Fourcade’s strike season theatrics was also the basis for the sports movie, “The Replacements” starring Keanu Reeves and Gene Hackman.

“People have told me in Hollywood that it was based off of our strike season team,” he said.

From 1987 to 1991, Fourcade played for the Saints, first as a backup and then as a starter again.

Those last three games were all against teams vying for a playoff spot, but Fourcade and the Saints denied them all. They beat the Buffalo Bills in Buffalo, in the frozen temps and snow, and then hosted the Eagles and Colts.

Fourcade had injured his elbow and in 1991, Herbert came back, the team traded for Steve Walsh and had a much cheaper Mike Buck on the roster and the Louisiana Rebel didn’t heal well enough to beat them out. From there he put together a career in the Arena Football league as a player/coach through 2001 then a coach through 2008. The arena league stops were from Milwaukee, Wisconsin to Miami, Florida to Mississippi and Louisiana. He now works as a commentator on both TV and radio for college and pro sports and he’d welcome the opportunity to coach on the offensive side of the football on the college level. Fourcade has also donated a lot of time and money in helping natural disaster victims across the US.

Fourcade has a nephew, Chase Fourcade, who is following in his footsteps in Louisiana as an All-State quarterback winning back-to-back state championships. There could be another Louisiana Rebel in the making, but he’s got some big shoes to fill and a heck of a legend to follow. – RN