Year One vs. Year Two Under Hugh Freeze: Stats that Matter

In his second year leading the Ole Miss Rebels enterprise, Head Coach Hugh Freeze continued to move the program in the right direction. The Rebels improved upon a six-win regular season in 2012 to a seven-win regular season in 2013. Further, the Rebels went bowling in back-to-back seasons for the first time since the 2009 and 2010 Cotton Bowls. Sure, there were a couple of games that the Rebel faithful feel slipped away this year. But as Freeze would tell you himself, this team is still “ahead of schedule.”

While there were certainly high points during the season, from RB Jeff Scott’s 75-yard, game-winning touchdown jaunt against Vandy to the unexpected upset of a then No. 6-ranked LSU Tigers club, Rebel fans also experienced their share of disappointment, from a second-straight Texas A&M letdown to an epic debacle in Starkville.

However, with the 2014 season on the horizon in which the Rebels should have a chance to do something very special, it’s important to understand where Freeze’s club improved in 2013 and still needs work to come back stronger next year in his third  season.
Note: Statistics below are based upon regular-season games only for both 2012 and 2013, as the 2013 bowl game has not been played at the time of publication.

Three Areas That Shined This Season

Total Offense
Entering the 2013 campaign with a full year of experience in Freeze’s up-tempo, fast-break offense, the Rebels showed definite signs of improvement on offense as a whole. Junior QB Bo Wallace helped increase offensive production per game from an average of 426.8 yards  in 2012 to 473 yards this season. That’s nearly a 50-yard per game increase in a single season, and numbers should continue to climb in 2014. Moreover, Freeze has been able to run a quicker offense than he did in 2012, as Ole Miss averaged 6.7 more offensive plays per game in the 2013 regular season.

Passing Defense
Junior S Cody Prewitt played a major role in Ole Miss’ success defending the pass this season, having recorded a team-high 70 tackles and six interceptions during the regular season. Having allowed opposing quarterbacks to throw for 251.7 yards per game in 2012, the Rebels finished the 2013 regular season having only yielded 221.2 YPG passing. Further, the unit only gave up nine passing touchdowns in all of 2013 versus 20 they yielded just the year prior. With the return of Prewitt and a host of other defensive stars, the Ole Miss pass defense should be one of the best in the conference next season.

Third Quarter Scoring
In 2013, Ole Miss outscored opponents in the regular season by a combined total of 128 to 76 over the third quarter, for a net difference of plus-52 points. However, it was an entirely different story for the Rebels in Freeze’s first season when the Rebels only outscored opponents by a total of 22 points over the third quarter of play (89 to 67). The 30-point swing in third-quarter scoring differential shows both that Freeze and Co. are making better, more efficient adjustments at the half and players are, even more importantly, listening. 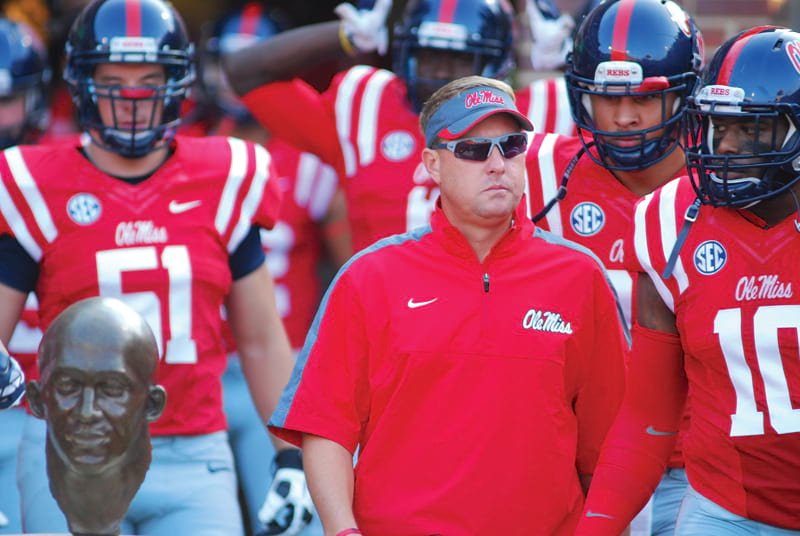 Red Zone Scoring
As productive as the Ole Miss offense was when it was “on” at times this season, both red zone scoring and red zone touchdowns were down in 2013. Maybe defenses were better-equipped to defend Freeze’s red zone tendencies this fall? Regardless, total red zone scoring dropped from 90% in Freeze’s first season, when the Rebels scored on 37-of-41 red zone trips, to 76% (31-of-41) over the 2013 regular season. As for actual touchdowns scored inside the 20 this year, the red and blue offense scored five fewer touchdowns on the same exact number of red zone trips they made in 2012. Knowing the offense should be even stronger in 2014, red-zone trips must become more fruitful.

Second Quarter Scoring
While the Rebels actually improved upon their second quarter scoring differential, from minus-24 in 2012 to minus-17 this past season, its actual “points for” versus “points against” over the second quarter of 2013 that truly reveals the concern. This season, Ole Miss only put 64 second-quarter points on the board during the regular season, as opposed to the 95 points the Rebels posted in 2012 (31 fewer). It’s not what you’d expect of a team more familiar with its offense in year two. Whereas fourth quarter inefficiency was what hurt the Rebels in 2012, it was the second quarter that hurt the team in 2013.

Team Sacks
Maybe the most surprising statistic on paper this season, although not surprising from what you likely noticed watching games, was team sacks by Ole Miss. The loss of veteran DLs such as Jason Jones and Gilbert Pena among others truly impacted the Rebels up front throughout the year. Talented, less-experienced defensive linemen like Robert Nkemdiche, Channing Ward and Issac Gross performed well in 2013, but the loss of veteran and reserve linemen showed. Total team sacks fell from 34 in 2012 to only 19 in 2013. Moreover, the unit recorded 14 fewer tackles for loss this season (78) than last (92). Barring the injury bug, which hit the Rebels hard at times this Fall, the progression of younger starters and reserves should make the unit much more effective in 2014.

Putting It All Together
As evidenced in the analysis of the categories discussed, there were both areas the Rebels improved upon in Freeze’s second year and, alternatively, areas in which there was actually a decrease in production in Freeze’s sophomore campaign.

That being said, the Rebel faithful should have expected both some good and bad.

It’s only normal for a young team, with a new coach, on the rise in the nation’s toughest conference, not to mention the toughest single conference division in the nation.

While coaches, along with number-oriented folks like myself, put a lot of stock into chopping up statistics to gain better insights, the bottom line is that the Ole Miss Rebels are right about where they should be.

In fact, they’re probably still ahead of schedule.

QB Bo Wallace returns for a senior season in which he’ll be absolutely loaded with offensive playmakers. The Rebels’ regular season schedule, while still challenging, will be considerably less tough than it was in 2013. The Ole Miss defense won’t face either Alabama QB A.J. McCarron or Texas A&M QB Johnny Manziel next year. Freeze’s flashy 2013 recruiting class will enter the 2014 season with a year of experience under their belts. There’s reason to believe the recruiting tornado that took Oxford by storm with Freeze’s arrival may pick up a few more “impact” true freshmen in the 2014 class.

Putting it all together, Rebel Nation, expect even better returns in 2014.