So many games, so many wins. Ole Miss has its share of victories throughout its history, but we’ve come up with our list of the ten we feel put Ole Miss on the college football map.

#1> 1948 Delta Bowl – Fifty-five years after Dr. A.L. Bondurant led Ole Miss to its first gridiron win in 1893, a 56-0 shellacking of Southwest Baptist University, the red and blue would claim its first bowl game win behind the brilliant mind of first-year head coach John Howard Vaught in 1948.

Finishing the 1947 regular season as SEC Champions with a record of 8-2, including road wins at both LSU and Mississippi State, the Rebels were invited to only their second bowl game ever (Delta Bowl). Having lost 20-19 to Catholic University in the 1936 Orange Bowl, Ole Miss’ first bowl appearance, Vaught’s club looked to add to its SEC title by also notching the school’s first bowl victory.
Behind All-Americans Charlie Conerly and Barney Poole, the Rebels knocked off their head coach’s alma mater, TCU, by a score of 13-9 to capture Ole Miss’ first bowl win. The “Wonder Team’s” Delta Bowl win not only capped one of the best season’s in program history, but also marked the beginning of an epic postseason career by legend Johnny Vaught.

Riding a 22-game winning streak entering Hemingway Field against No. 11 Ole Miss, Maryland would prove to be a tough foe for the home team. Just what could Lear do against the nation’s top-ranked defense?

Coming from behind to lead the Rebels to the huge upset, Lear went 11-of-16 for 231 yards through the air while also picking up 44 yards on the ground. By the time the clock struck all zeroes, the Rebels had snapped Maryland’s 22-game win streak by a score of 21-14. The game helped put Vaught’s Ole Miss team on the national map and remains one of the most talked about wins in program history.

Not too long after, Vaught and the boys would get a chance to avenge the lone blemish on their otherwise undefeated regular season. On January 1, 1960, the No. 2 Rebels would have a date with destiny, as No. 3 LSU awaited them in the Sugar Bowl.

Behind a combined three touchdown tosses from Jake Gibbs and Bobby Franklin and a downright stifling defense that held the Tigers to only 74 yards of total offense, the Rebels would pitch a 21-0 shutout win en route to the school’s first national championship.

Having already lost a game to Memphis leading up to the Notre Dame game, there was little to no expectation that the Rebels could even stay close with the Irish.

Nevertheless, what went down at a steamy Mississippi Veterans Memorial Stadium that September day will live in Rebel lore for eternity. Despite Notre Dame’s best effort to avoid the upset, Ole Miss fullback James Storey, supposed to be blocking at the time, pulled in a 10-yard bobbled pass from senior reserve quarterback James Storey for the game-winning touchdown in Jackson.
The rest as they say is history.

And by the way, there was a reserve quarterback on the Irish bench that afternoon named Joe Montana. Before the Irish’s next game even ended, Montana would supplant himself as a long-time starter after leading his team to a come-from-behind win versus Purdue.

#5 > 1962 Sugar Bowl (Arkansas) – A deserving top-five program win for a number of reasons, the first of which is because the 1962 Sugar Bowl helped cap off the only undefeated season in school history.

Marred by a 1962 regular season which saw federal troops, riots and death on the Oxford campus, in the wake of controversy surrounding James Meredith’s ultimate enrollment as a student at Ole Miss, the football team was surprisingly able to stay focused and win every single contest in 1962.

On January 1, 1963, Vaught would square off against head coach Frank Broyles’ Arkansas club. It wasn’t just a chance for quarterback Glynn Griffing and his teammates to claim their place in Rebel history with an undefeated record and national championship. Instead, it was also a chance for the Rebels to rise up on the heels of the horrific events of 1962 and show the nation that Ole Miss was better than what had taken place.

And that’s exactly what the 1962 Rebels went on to do in the 1963 Sugar Bowl, as they defeated the Razorbacks 17-13 to successfully post a 10-0, undefeated season and claim a share of the national championship. 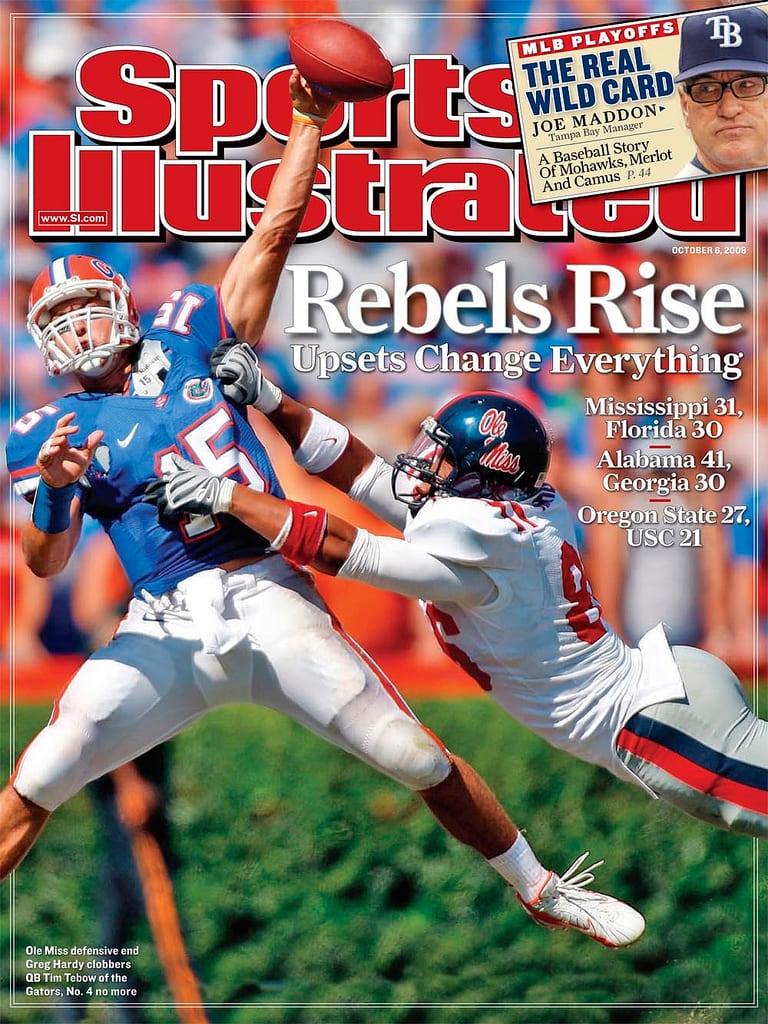 #6 > 2008 Florida  – In The Swamp against a then-No. 4 Florida Gator club, Houston Nutt helped coach the Rebels to one of the program’s greatest road wins of all-time. Referred to by many as the “Tebow Game,” in reference to Florida QB Tim Tebow’s emotional post-game press conference speech, most Ole Miss fans best remember the upset by defensive lineman Kentrell Lockett’s blocked extra point.

Only trailing 31-30 after a late score by jack-of-all-trades wide receiver Percy Harvin, the Gators had a golden opportunity to tie the game and potentially avoid the epic upset by simply sending the extra point attempt through the goal posts. But Lockett didn’t let that happen.

Still clinging to a one-point lead as Florida made a strong push in the final minute, the Rebel defense stuffed Tebow on a fourth-and-one try to seal the Ole Miss upset. In the end, the win gave Nutt his signature win and helped the Rebels snap what was a 14-game SEC road skid.

The Rebels ended the 2008 campaign on a six-game winning streak, including a wild 47-34 win over then No. 8 Texas Tech in the ATT Cotton Bowl.

On October 8, 1988, Head Coach Billy Brewer’s club topped the Tide by a score of 22-12 to claim the program’s first win against Alabama in the state of Alabama. Despite several close calls since that hallowed day, the 1988 win at Bryant-Denny remains Ole Miss’ only road win over Alabama. It may be hard to believe, but it’s true.

Having successfully played Alabama to a scoreless first half tie, the 1-3 Rebels quickly found themselves trailing 12-0 after a couple of early second half scores by the Crimson Tide.

It looked like the upset bid may have been slipping away, but the Rebels weren’t done fighting.

With under three minutes left in the fourth quarter, the Rebels found themselves trailing 12-7. However, what happened in the final minute of play is something Ole Miss fans will never forget. In a matter of 46 seconds, the Rebels put up 15 points to capture a 22-12 road win over then-No. 12 Alabama. To this day, it remains one of the most coveted road wins in program history.

With Quarterback Eli Manning returning for his senior season, hopes were high that 2003 was going to “the year” for Ole Miss Football. Having gotten off to a disappointing 2-2 start following unexpected losses to both Memphis and Texas Tech, Rebel fans didn’t really know what to expect when SEC play got underway at No. 24 Florida.

However, with an upset win in Gainesville to open the conference slate, Ole Miss fans were provided with a glimpse into the future. Having won in The Swamp, Manning would propel his club to wins in six of their final seven regular season contests (the lone blemish coming against LSU).

Despite having lost a truly epic home game against the Bayou Bengals in which a win would have sent the Rebels to the SEC Championship Game and possibly the Sugar Bowl, Ole Miss gladly welcomed a chance to play in its first Cotton Bowl since a 1962 matchup with Texas.

In Eli’s final game with the Rebels, he went 22-of-31 for 259 yards and three total touchdowns. Up 31-21 early in the fourth quarter, the Ole Miss defense held off a feisty Oklahoma State offense to prevail 31-28. It was the perfect ending to a memorable senior season by Manning.

#9 > 2013 LSU  – While there have been several improbable upsets by the Rebels over the years, it would be hard to argue any being more improbable than last year’s upset of the No. 6 LSU Tigers.

Missing five defensive starters and on the heels of yet another crushing, game-winning field goal by Texas A&M the week before, Ole Miss wasn’t expected to hang around very long with an extremely talented bunch from the bayou. However, that’s exactly what they did.

In a rare mid-October matchup between the two rivals, a traditional late-November matchup only moved to accommodate conference scheduling issues with the additions of Missouri and Texas A&M, what went down on Jerry Hollingsworth Field that cold November night is something that Ole Miss fans from California to New York had been waiting on for years: a program-changing win.

Having jumped out to a shocking 17-0 lead not even half way into the third quarter, Vaught-Hemingway Stadium became electric and something just felt different this time. When running back Jaylen Walton scampered 26 yards into the end zone late in the third quarter, the Rebels entered the fourth quarter up 24-14.

However, LSU tied things up with only minutes remaining in the game.

In a do or die final drive, quarterback Bo Wallace engineered a 14-play drive which setup kicker  Andrew Ritter for a 41-yard game-winning field goal try. Ritter’s kick sailed between the uprights, and a long-awaited celebration quickly ensued as Rebel fans of all ages stormed the field. It was Hugh Freeze’s signature win as leader of the Rebels and a program-builder.

#10 > 1989 Liberty Bowl (Air Force)  – In what was an emotionally and mentally trying year for Ole Miss coaches and players and fans alike after defensive back Chucky Mullins became paralyzed during the Vanderbilt game, the 1989 Liberty Bowl provided everyone associated with the program with a reason to rejoice.

Off to a 5-2 start prior to squaring off against Vanderbilt on October 28, 1989, the Rebels appeared to be headed for a memorable season. Spirits were high in Oxford. That was until Chucky collided with Commodore Brad Gaines and sadly became paralyzed.
As news came out just how bad of an injury Chucky sustained, football quickly took a backseat in the minds of Ole Miss fans.

However, Ole Miss players still had to practice every day and compete on Saturdays. While Chucky was in the hospital, wishing more than anything to be with his coaches and teammates, there was a very real physical and emotional void at practices and games. Nevertheless, Coach Brewer did an admirable job at keeping the unit focused.

Having lost contests in each of the two weeks following the Vanderbilt game, the Rebels bounced back with a 21-11 win in Starkville to win the Egg Bowl. With a win under their belts to end the regular season, Air Force awaited the Rebels in the 1989 Liberty Bowl.
Still with Chucky deep in their thoughts and prayers leading up to the Liberty Bowl, a moment awaited both Chucky and his teammates that will be cherished forever. Immediately before the team took the field an ambulance backed down the tunnel near the field. Suddenly, Chucky rolled out on a stretcher to wish his team well.

After seeing his teammates and cutting his million dollar smile, he said, “It’s time.”

“It’s time, it’s time, it’s time,” was shouted over and over by Ole Miss coaches and players before they took the field. Playing with heavy, yet inspired hearts, the Rebels rolled over Air Force by a score of 42-29 to cap one of the most difficult seasons ever.  – RN

EDITOR’S NOTE: Yes, we know this year’s Bama game would have made this list. It could arguably be the top win in Ole Miss win in history, as the game that put the Rebels back on the national scene for year to come. This list was printed in August before the season started.